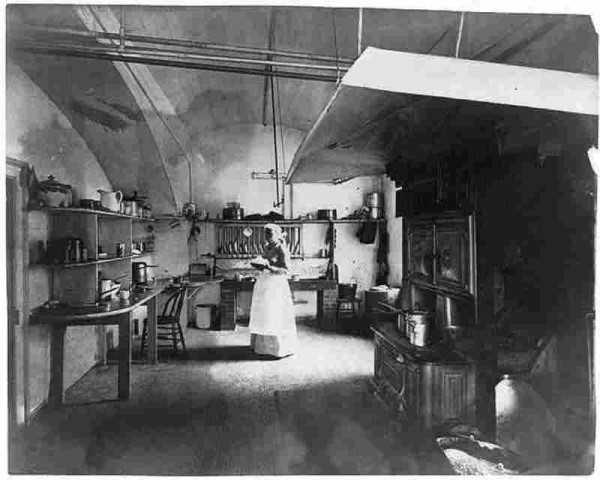 George Washington (1789-1797)
President Washington’s term ended before the building of the White House was complete, but slaves worked at the President’s Houses in which he and the First Lady resided in New York City and Philadelphia. Beginning in 1789, enslaved African Ona ‘Oney’ Judge, then 16, worked as a personal slave to Martha Washington. In 1796, as the Washingtons were preparing to return to Virginia for a short visit between sessions of Congress, Martha Washington informed Judge that she was to be given as a wedding present to the First Lady’s granddaughter. Judge recalled in an 1845 interview by an abolitionist newspaper:

Whilst they were packing up to go to Virginia, I was packing to go, I didn’t know where; for I knew that if I went back to Virginia, I should never get my liberty. I had friends among the colored people of Philadelphia, had my things carried there beforehand, and left Washington’s house while they were eating dinner.

Runaway advertisements in Philadelphia newspapers document Judge’s escape to freedom from the President’s House on May 21, 1796:

Absconded from the household of the President of the United States, ONEY JUDGE, a light mulatto girl, much freckled, with very black eyes and bushy hair. She is of middle stature, slender, and delicately formed, about 20 years of age.
She has many changes of good clothes, of all sorts, but they are not sufficiently recollected to be described—As there was no suspicion of her going off, nor no provocation to do so, it is not easy to conjecture whither she has gone, or fully, what her design is; but as she may attempt to escape by water, all masters of vessels are cautioned against admitting her into them, although it is probable she will attempt to pass for a free woman, and has, it is said, wherewithal to pay her passage.
Ten dollars will be paid to any person who will bring her home, if taken in the city, or on board any vessel in the harbour;—and a reasonable additional sum if apprehended at, and brought from a greater distance, and in proportion to the distance.

Oney Judge was secretly placed aboard the Nancy, a ship bound for Portsmouth, New Hampshire. That summer a friend of the Washingtons’ granddaughter Nelly Custis recognized Oney on the streets of Portsmouth. George Washington then wrote to Oliver Wolcott, Jr., the Secretary of the Treasury, about having Oney captured and returned to them. Oney offered to return voluntarily to the Washingtons if they would guarantee to free her following their deaths. An indignant Washington responded:

I regret that the attempt you made to restore the Girl (Oney Judge as she called herself while with us, and who, without the least provocation absconded from her Mistress) should have been attended with so little Success. To enter into such a compromise with her, as she suggested to you, is totally inadmissible, for reasons that must strike at first view: for however well disposed I might be to a gradual abolition, or even to an entire emancipation of that description of People (if the latter was in itself practicable at this moment) it would neither be politic or just to reward unfaithfulness with a premature preference [of freedom]; and thereby discontent before hand the minds of all her fellow-servants who by their steady attachments are far more deserving than herself of favor.

Washington’s term as president ended in March 1797. His nephew, Burwell Bassett, traveled to New Hampshire in September 1798 and tried to convince Oney to return. By this point, she was married to a seaman named Jack Staines and the mother of an infant; she refused to return to Virginia with him. Bassett’s planned to kidnap her, but Oney was forewarned and immediately went into hiding. Bassett returned to Virginia without her. She lived as a fugitive slave in New Hampshire for the rest of her life. 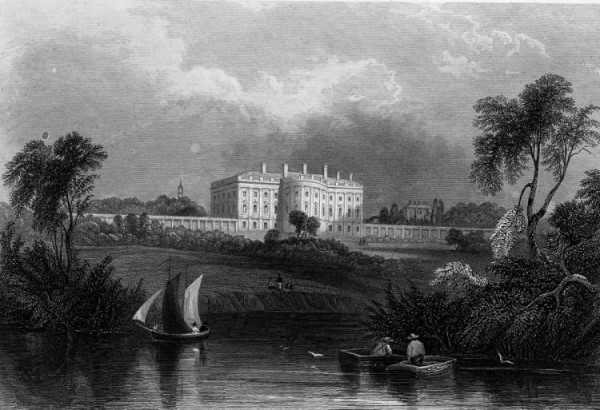 Image: An early drawing of the White House, which has been the residence of every president since John Adams in 1800.

John Adams (1797-1801)
By the time John and Abigail Adams became the first residents of the White House in November 1800 – toward the end of the Adams presidency – they had employed a steward, John Briesler, for nearly two decades. Briesler and his wife, Esther, formed the core staff of the White House. Including the Brieslers, there were only four servants – none of them slaves. Abigail Adams calculated that she could have easily used thirty to run the “castle,” but the government did not pay for the president’s domestic help. President Adams and Mrs. Adams were opposed to slavery. John Adams wrote in 1801, “[M]y opinion against it has always been known. … [N]ever in my life did I own a slave.”

Thomas Jefferson (1801-1809)
President Thomas Jefferson relied heavily on his French steward Etienne Lemaire through his two administrations. There were two other white servants: French chef Julien and Irish coachman Joseph Dougherty. The remainder of Jefferson’s regular household staff included slaves from Monticello. The kitchen staff cooked all day providing food for servants, staff, and any guests who might visit.

President Jefferson took charge of the entertaining at the White House during his presidency. Whenever he had women dinner guests, he invited Dolley Madison, the wife of Secretary of State James Madison, as his escort – his vice president Aaron Burr was also a widower. At large open functions in the White House, Dolley Madison also assumed a public role as hostess and assisted the President in welcoming the general citizenry.

Melinda Colbert
In April 1804, a slave named John Freeman wrote a letter to President Jefferson. Freeman worked in the White House for the president and accompanied him on trips to Monticello. Freeman had fallen in love with a Monticello slave named Melinda Colbert, who belonged to Jefferson’s daughter Maria and her husband. Maria died that month, and the two slaves feared Melinda would be sold. Freeman promised to serve Jefferson faithfully if he (Jefferson) would purchase the couples’ freedom.

Jefferson bought Freeman for $400 but declined to buy Melinda Colbert. However, she remained at Monticello, where Freeman saw her on visits. Though slaves could not legally marry, they considered themselves husband and wife and began having children. By 1809, Melinda had been given her freedom and had moved to the White House. Ironically, Jefferson’s term as president was ending, but he agreed to sell Freeman to James Madison, the incoming president. Melinda did sewing for the Madisons, for which she was paid.

In 1815, James Madison granted John Freeman his freedom; he then married his beloved Melinda and purchased a piece of property in Northwest Washington. There he established a home for his wife and their children, among a unique community of free blacks with ties to the early U.S. presidents. Freeman worked as a waiter at Gadsby’s Hotel and as a messenger at the State Department.

James Madison (1809-1817)
President Madison brought slaves to the White House from his Virginia estate, Montpelier. Paul Jennings, who was born into slavery at Montpelier circa 1799, was a ‘body servant’ to the president. Jennings, whose mother was a house servant for Dolley Madison, was frequently in James Madison’s presence from a very early age.

The earliest known account of slavery in the White House was Jennings’ A Colored Man’s Reminiscences of James Madison (1865), in which Jennings recalls moving to Washington, DC:

When Mr. Madison was chosen President, we came on and moved into the White House; the east room was not finished, and Pennsylvania Avenue was not paved, but was always in an awful condition from either mud or dust. The city was a dreary place.

After Madison’s tenure as president, Jennings moved back to Montpelier and then returned to Washington with Dolley Madison after the ex-president’s death in 1836. Jennings arranged for statesman Daniel Webster to lend him his purchase price of $200. He worked off the debt and proceeded to acquire two houses. Later in his life, he would give part of the money he earned from his job at the Department of the Interior to Dolley because she was destitute at the time.

Jennings wrote this about Dolley Madison:

Mrs. Madison was a remarkably fine woman. She was beloved by every body in Washington, white and colored. Whenever soldiers marched by, during the war, she always sent out and invited them in to take wine and refreshments, giving them liberally of the best in the house. Madeira wine was better in those days than now, and more freely drank. In the last days of her life, before Congress purchased her husband’s papers, she was in a state of absolute poverty, and I think sometimes suffered for the necessaries of life. While I was a servant to Mr. Webster, he often sent me to her with a market-basket full of provisions, and told me whenever I saw anything in the house that I thought she was in need of, to take it to her. I often did this, and occasionally gave her small sums from my own pocket …

James Monroe (1817-1825)
When he was sworn into office on March 4, 1817, James Monroe became the first U.S. president to have his ceremony held outdoors. The new president and his family could not take up immediate residence in the White House because it had been destroyed by the British during the War of 1812. They lived in a home on I Street until renovations were completed in 1818. President Monroe owned dozens of slaves, and he took several of them with him to serve at the White House. Domestic slaves included President Monroe’s valet, Mrs. Monroe’s maid, and the cook and her assistants. 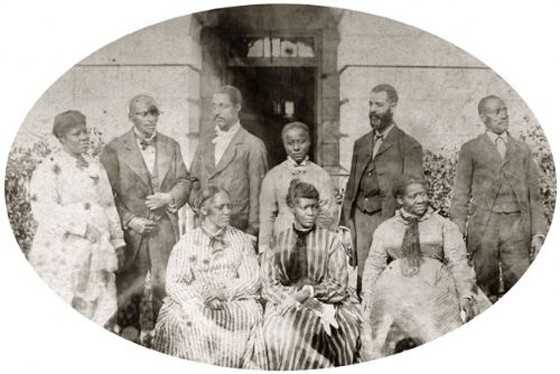 Slavery was becoming a contentious issue during James Monroe’s presidency. The North had banned slavery, but the Southern states relied heavily on the labor of enslaved human beings. Torn between his belief in the evils of slavery and his fear that immediate abolition would result in mob violence and race wars, Monroe came to believe that colonization was an effective means of ultimately eliminating slavery in the United States.

In 1817 the American Colonization Society was formed to seek an end to slavery in America. In 1822, the Society established the colony of Liberia on the west coast of Africa as a place where freed slaves from the United States could be resettled. With government support, the Society purchased land and sent several thousand freed slaves to the new colony of Liberia in Africa between 1820 and 1840. Because Monroe endorsed the Society during his presidency, the new nation’s capital was named Monrovia.

John Quincy Adams
Like his parents, John Quincy Adams did not own slaves, but an 1826 inventory taken during his administration recorded the typical furniture used by servants who lived in the basement of the White House during the first half of the 19th century. For example, the cook slept on a cot, and had a pine wardrobe and a pine table; other servants’ rooms were similar, with cots and mattresses and “low post” bedsteads, blankets, and sheets; sometimes they had benches, chairs, and tables. Often the furniture was described as “worn out” or “in want of repair.”