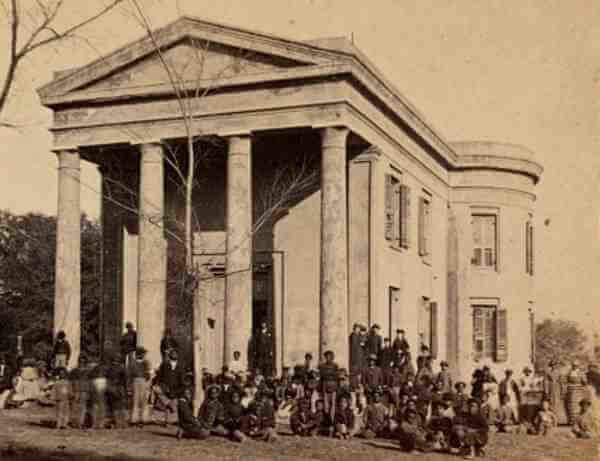 The Battle of Port Royal on November 7, 1861 was the beginning of the end of the Old South. Beaufort was the first southern city captured by Union forces, remaining in their hands throughout the war. The town had been completely abandoned by its white citizens by the time Federal forces arrived there.

Beaufort, South Carolina
Beaufort lies 10 miles inland along the Beaufort River which leads to the Port Royal Sound and empties into Atlantic Ocean midway between Charleston and Savannah, Georgia. The city was ruined during the Battle of Beaufort in the Revolutionary War, and it recovered slowly. But in the early 1790s a new crop was introduced: Sea Island Cotton, the finest cotton grown in America. From then until 1860, cotton produced so many men of wealth that one historian described Beaufort as the “wealthiest, most aristocratic and cultivated town of its size in America.” Most of Beaufort’s fine homes were built in that era. The town also gained a reputation for having the best libraries and preparatory schools in the Southern states.

Sea Islands
The Sea Islands of South Carolina were home to some of the wealthiest planters in the South. The town of Beaufort had a year-round white population of about 2,000, but that number nearly doubled in the summer, when the planters left the cities for the finer weather of the islands. About 13,000 black slaves permanently resided on the Sea Islands; they ran the plantations, oversaw the cotton fields and tended the rice. They lived and worked under repressive slave laws, completely isolated from the mainland.

Naval Battle of Port Royal
Port Royal is a town near Beaufort, which takes its name from the adjacent Sound. Soon after the war began, President Abraham Lincoln called for a blockade of Confederate ports. Southern commanders knew Beaufort was a likely target for the Union Navy. At the urging of General P.G.T. Beauregard, Confederate officials constructed fortifications at the mouth of Port Royal Sound to protect the town in July 1861: Fort Walker on Hilton Head Island and Fort Beauregard across the sound on St. Phillips Island. However, the two forts were separated by the three-mile-wide mouth of the sound; to be effective, the soldiers manning the forts needed guns of longer range and larger caliber, which the Confederacy had not yet acquired.

On November 4, 1861 Union Rear Admiral Samuel Du Pont and his fleet of 71 ships assembled off the inlet to Port Royal Sound and prepared for combat. On November 7, 1861 Du Pont led his flotilla of U.S. Navy warships into Port Royal Sound and quickly silenced the guns at Forts Beauregard and Walker. After a lengthy bombardment, General Thomas Drayton’s Confederate forces abandoned the forts and successfully withdrew to the mainland. By the end of the day, Union land forces had secured both forts. The islands fell into Union hands and were held throughout the war.

Union Occupation of Beaufort
A month after the Battle of Port Royal, Union forces occupied a deserted Beaufort, the only sizable town in the area, as well as the fine old plantations along Port Royal Sound. They also took possession of the Sea Islands surrounding Beaufort and the entire string of coastal islands from Savannah almost to Charleston. Beaufort became the chief base of operations of the South Atlantic blockading squadron and headquarters of the Union Army’s Department of the South.

You can form no idea of the terror we have spread in the whole Southern country. Beaufort is deserted; the gunboats were up yesterday to save the light vessels but they were burned the moment the forts surrendered, or rather were destroyed, for the enemy flew in panic leaving public and private property, letters, portfolios, all their regimental achieves, clothes, arms, etc. – they were grandly supplied, ammunition of the most perfect kind, etc. The contrabands [slaves] are wild and sacking Beaufort, in return for being shot down because they would not leave with their masters.

In March 1862, Gideon missionaries arrived in the Port Royal area to establish schools and a hospital. In the interim, Secretary of the Treasury Salmon P. Chase developed a plan that allowed some of the freedmen to operate the plantations, while the profit gained from the crops was given over to the federal government.

Union Hospital #10
Initially, hospitals in Beaufort served both white and black wounded, but the Northerners resented the presence of blacks in the hospitals and vented their prejudice with verbal abuse. The Union War Department responded to the need for separate facilities by making the Elizabeth Barnwell Gough House at 705 Washington Street – one of Beaufort’s grandest homes – the first hospital for black soldiers.

After the Battle of Port Royal, the Union Army chose the house as a hospital to serve the wounded from three of the most celebrated black regiments: the 54th Massachusetts, and the 1st and 2nd South Carolina Volunteers. Doctors John Milton Hawks and his wife Esther Hill Hawks and nurses Clara Barton, Susie King Taylor, and Harriet Tubman offered the best care available at 705 Washington Street.

From the diaries of Dr. Esther Hill Hawks we have accounts of the early months of the house’s tenure as Hospital #10. Various officers had previously used it as their headquarters:

The house was one of the Barnwell mansions – and when our troops came here, magnificently furnished, but 18 months occupation by soldiers leaves nothing but a filthy shell; Mrs. Strong, wife of our Maj. was appointed nurse by Mrs. Lander, and she and I went about for weeks with rag in hand, overseeing and instructing in cleaning. We already had between 20 and 30 patients – and this, with getting things in order, kept us very busy.

They received a large number of wounded from the Second Battle of Fort Wagner, (July 18, 1863) which Dr. Hawks recorded in her diary:

Prepare immediately to receive 500 wounded men, indeed they were already at the dock! And before morning … 150 of the brave boys from the 54th Mass. Col. [Robert Gould] Shaw‘s Regt. were brought to us and laid on blankets on the floor all mangled and ghastly. … It was 36 hours since the awful struggle … and nothing had been done for them. We had no beds, and no means of building a fire, but the colored people came promptly to our aid and almost before we knew what we needed they brought us: buckets full of nice broth and gruels, pitchers of lemonade, fruits cakes, vegetables indeed everything needed for the immediate wants of the men was furnished – not for one day but for many. …

In 24 hours the poor fellows were lying with clean clothes and dressed wounds in comfortable beds, and we breathed freely again before setting about creating a hospital: no one, unless they have had the experience can imagine the amount of work and worry needed in setting one of these vast military machines in motion!

And in this case humanity demanded that the poor fellows who had fought so bravely, should be first attended to. The colored people still continued to supply delicacies and more substantial aid came from the citizens and Sanitary Commission. It was a busy time, and the amount of work done in the first 24 hours, by the two surgeons … is tiresome to remember! The only thing that sustained us was the patient endurance of those stricken heroes before us, with their ghastly wounds cheerful and courageous …

Aftermath
Although much of the town of Beaufort escaped physical damage, there were many incidents of arson and looting. Some of its most prominent families returned to the area after the war but never regained the enormous wealth that slave-based agriculture provided. Most of the antebellum secessionists – like Robert Barnwell Rhett, a pro-slavery and secession spokesman – did not come back to the Islands. Rhett spent the rest of his days in Louisiana.