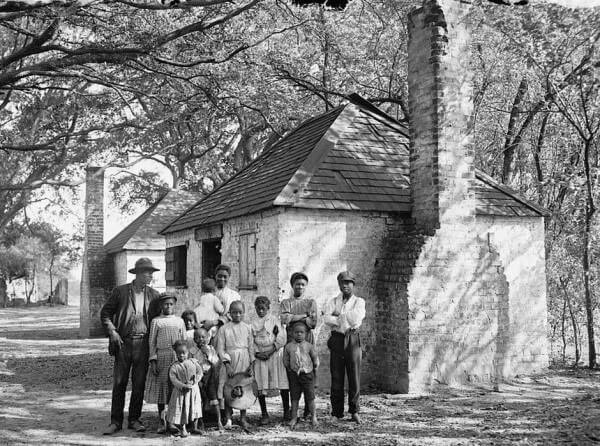 Image: A freed family on a plantation gathered for a photograph

After the Civil War, African American women were promised a new life of freedom with the same rights provided to other American citizens. But the newly freed women in the South had little or no money, limited or no education and little access to it, and racism impacted every area of their lives. The transition from enslavement to freedom was a difficult and frightening one for most black women who emerged from enslavement knowing “that what they got wasn’t what they wanted; it wasn’t freedom, really.”

The Civil War promised freedom to African American women, but as the Confederate Army and slaveowners fleeing from Union troops often took their male slaves with them. The women and children were left behind. Even after the Emancipation Proclamation freed African Americans in rebel states in 1863 and the Thirteenth Amendment emancipated all slaves wherever they were, the nation was still unprepared to deal with the question of full citizenship for its newly freed black population.

Freedmen’s Bureau
The Bureau assisted African Americans in finding jobs, land, a home, and an education, as well as obtaining clothing, food, water, and health care. It distributed 15 million rations to blacks and set up a system by which planters could borrow rations to feed freedmen they employed. Its efforts were quickly consumed with the plight of former slaves and the objective of establishing emancipation in the face of strong opposition.

In 1865, Republican congressmen founded the Bureau of Refugees, Freedmen and Abandoned Lands, better known as the Freedmen’s Bureau, to avert mass starvation and suffering of freedwomen and men. The immense social crisis that made the bureau necessary came as a direct result of the Union Army’s physical destruction of the South.

The Freedmen’s Bureau, which had offices in 15 Southern states and the District of Columbia, operated from 1865 to 1872 to help manage the aftermath of the Civil War and the freeing of slaves.

The Reconstruction implemented by Congress, which lasted from 1866 to 1877, tried to find ways for whites and blacks to live together in a free society, but people in the South saw Reconstruction as a humiliating imposition.

With the protection of the Thirteenth, Fourteenth, and Fifteenth Amendments to the Constitution and the Civil Rights Act of 1866, however, African Americans enjoyed a period when they were allowed to vote, participate in politics, purchase the land of their former owners, and seek their own employment. Opponents of this progress, however, soon rallied against the former slaves and eroded the gains for which many had shed their blood.

Nicodemus, Kansas
After the Civil War there was a general exodus of blacks from the South. Some emancipated slaves quickly fled from the neighborhood of their owners, while others became wage laborers for them. Benjamin Singleton led an exodus of African Americans from various points in the South to Kansas. Six blacks and two whites ncorporated the Nicodemus Town Company in Kansas in 1877 – the oldest of about twenty towns established predominately for blacks in the West. 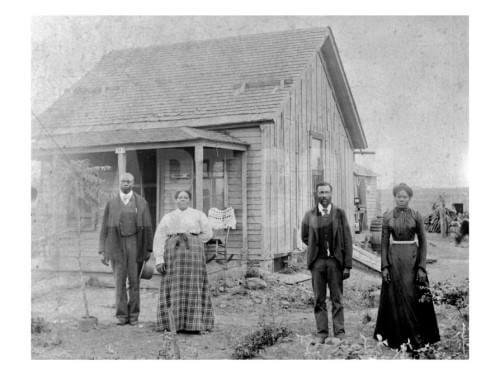 Nicodemus, Kansas is located on the plains in the northwest corner of Kansas. The six founders, all from Lexington, Kentucky, named the town Nicodemus after a legendary African slave prince who had purchased his freedom. They envisioned Nicodemus as a place where its settlers would have both political freedom and economic opportunity.

Northern teachers, many of whom were white women, volunteered to provide education and training for the newly freed population. In time, schools from the elementary level through college provided a variety of opportunities, from the rudiments of reading and writing and various types of basic vocational training to classics, arts, and theology.

By 1886 Nicodemus had become a prosperous community surrounded by farms owned by blacks. The town had two newspapers, the Nicodemus Enterprise and Nicodemus Western Cyclone. There was also a drugstore, a bank, schoolhouse, three churches, and a general store, the first two story building in the town.

Kate Drumgoold
Multiple sources estimate that she was born in 1858 or 1859 near Petersburg, Virginia. While Drumgoold was still young, her mother was sold to allow her owner to pay a poor white man to go to the Civil War in his place. Drumgoold’s mother left a husband, one son, and 17 daughters behind. Kate later wrote:

We did not know that she was sold until she was gone; and the saddest thought was to me to know which way she had gone and I used to go outside and look up to see if there was anything that would direct me.

When Kate’s mother returned to her family after Emancipation, she found her husband remarried, her daughters scattered, and her only son, who had fought for the Confederacy, was now missing.

Kate and her mother reunited as much of the family as possible and moved to Brooklyn, New York, where Kate worked as a domestic, battled significant illnesses, and worked toward obtaining an education, which she considered essential to the advancement of African Americans. Her plans to attend school had to be put aside for a few years after she contracted smallpox, but she never wavered in her determination.

For every time that I saw the newspaper there was some one of our race in the far South getting killed for trying to teach and I made up my mind that I would die to see my people taught.

Kate Drumgoold left Brooklyn and went to Wayland Seminary school in Washington DC and later returned. In 1878 she left again and went to Harpers Ferry for four years at school. She returned again to Brooklyn and began teaching in 1886, fulfilling her dream of teaching African Americans. Her mother passed away on February 28, 1894, but Kate continued to teach for eleven more years until her health began to fail.

On January 20, 1897 a severe illness of some sort struck Kate Drumgoold, and she was forced to quit teaching in March of 1897. Her autobiography ended abruptly soon after, as she prayed for the strength to finish her work.

Mattie J. Jackson
Mattie Jane Jackson was born in January 1847 in St. Louis, Missouri, the daughter of Westley Jackson and Ellen Turner. Despite being enslaved by different owners, her parents had three children together: Sarah Ann, Mattie Jane, and Esther J. After the birth of his youngest daughter, Westley Jackson escaped slavery through the Underground Railroad. He settled in Chicago, Illinois and became a minister, but he died before the Civil War.

Mattie Jane Jackson (1847-1910) is known for her 1866 autobiography, The Story of Mattie J. Jackson: Her Parentage, Experience of Eighteen Years in Slavery, Incidents During the War, Her Escape from Slavery: A True Story (1866). Excerpt from that book:

Two years after my father’s departure, my mother, with her two children, my sister and myself, attempted to make her escape. After traveling two days we reached Illinois. We slept in the woods at night. I believe my mother had food to supply us but fasted herself. But the advertisement had reached there before us, and loafers were already in search of us, and as soon as we were discovered on the brink of the river one of the spies made enquiries respecting her suspicious appearance. She was aware that she was arrested, consequently she gave a true account of herself – that she was in search of her husband. We were then destitute of any articles of clothing excepting our wearing apparel. Mother had become so weary that she was compelled to leave our package of clothing on the way. We were taken back to St. Louis and committed to prison and remained there one week, after which they put us in Linch’s trader’s yard, where we remained about four weeks. We were then sold to William Lewis.

Six years later, Ellen Turner met and married George Brown and together they had two sons. Brown escaped to Canada around 1855. Turner tried several times to join her husband, but was repeatedly caught and beaten. Brown returned to the United States, changed his name to John G. Thompson, and became a barber in Lawrence, Massachusetts.

Her owner grew tired of Turner’s constant attempts to escape; he sold her and her children to the captain of a Mississippi River steamboat. When Ellen met Sam Adams and made preparations to marry, the steamboat captain kidnapped the family and sent them to Louisville, Kentucky, where they were sold to different owners. 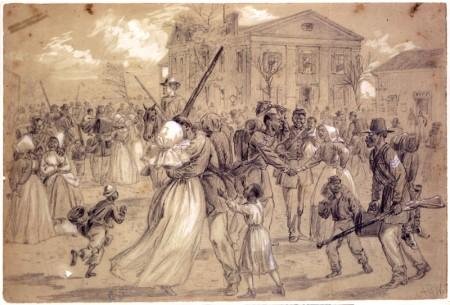 Image: Mustered Out
Little Rock, Arkansas, April 20, 1865.
Published in Harper’s Weekly, May 19, 1866.
Alfred Waud’s drawing captures the exuberance of the African American women and children as the U. S. Colored Troops returned home at the end of the Civil War.

Shortly after the end of the war, Mattie Jackson’s stepfather, who had earlier changed his name to John G. Thompson, located the family and invited Jackson and her half-brother to join him and his wife, Dr. Lucy Susan (Prophet) Schuyler Thompson, a botanical physician and antislavery activist. Mattie was nineteen when she brought her eleven-year-old half-brother to Lawrence, Massachusetts to live with his father and stepmother, Lucy Susan Prophet Schuyler Thompson, who had recently lost her only child, a Civil War soldier.

In 1866, Mattie related her life experiences as a slave to her stepmother who went by the title Dr. L.S. Thompson. also published The Story of Mattie J. Jackson to raise money for Mattie’s education. Evidence shows she finished her education and moved back to St. Louis, with her mother Ellen and her third husband, Sam Adams.

In 1869, Mattie married William Reed Dyer, a native of Warrenton, Missouri, a Union Army veteran who was employed as a porter on steamboats traveling up and down the Mississippi River. They eventually moved into their own home in the city of St. Louis. Out of their eight children, four sons and a daughter reached maturity. Of their nine children, five would live to maturity. After Ellen Turner Adams’ death in May 1893, the Dyers moved to Dardenne Prairie, Missouri, about thirty-five miles from St. Louis, where they lived for the rest of their lives.