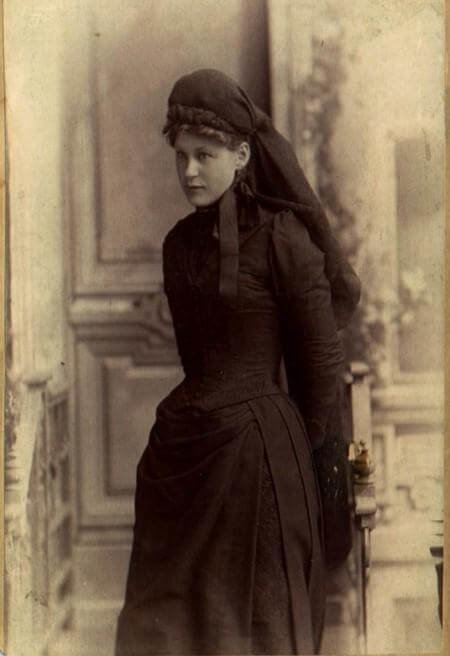 Image: Deep mourning clothing
Veil on top of bonnet was lowered over face while in public

Mourning is the process of grieving the death of a loved one. During the Civil War, Americans observed an elaborate set of rules that governed their behavior following the death of a spouse or relative. After the loss of a husband, the widow was not to leave home without full mourning garb and weeping veil for one year and a day.

Mourning Etiquette
During the 19th Century, most funerals were held in the home. In preparation for visitation and funeral services, the home of the deceased would show the community that there had been a death in the family. Draping the front door in black fabric was the most common practice. Inside the home, anything reflective or shiny would be covered, such as mirrors and glass of any kind, including picture frame glass.

People believed that when a person died time stood still and a new realm of existence began where the concept of time did not exist. Therefore, pendulums on clocks were stopped at the hour of the deceased’s death. To permit the clock to continue marking time was synonymous with inviting the spirit of the deceased to haunt the home.

Widow’s Weeds
The custom of wearing black after a death in the family has been observed for centuries, possibly to draw less attention to the mourners to avoid becoming Death’s next victim. A woman donned what was known as “widow’s weeds” within twenty-four hours of her husband’s death. Black crepe or crape typically referred to a silk or wool fabric with a distinctively crinkled or pebbled texture that was specifically used for mourning clothing.

Dyeing and Mourning
During the Civil War, especially in the South, fabric and ready-made clothing were extremely scarce. Therefore, women dyed their clothing at home in large wash tubs in the backyard. The dyeing agent was often created by boiling walnut husks, which created a pungent odor that permeated the air for miles. A Virginia woman noted in her diary in 1864, “the entire town smells of the dye pots.”

Stages of Mourning
The length of a woman’s time of mourning was dictated by the relationship of the deceased. For the loss of a husband, the mourning period lasted no less than two years and most often lasted two and a half years. A woman mourned the loss of her husband in three stages: deep mourning, full mourning, and half mourning, with gradually loosening requirements of dress and behavior.

Deep Mourning
While in deep mourning a widow wore all black clothing; while in public, she also wore black gloves and a long black veil over her face. She wore bonnets covered in black crepe rather than hats. She did not wear jewelry for the first few months and thereafter, jet jewelry was permitted. Black glass and India rubber were also used to make mourning jewelry which consisted of rings, broaches, bracelets, lockets, and earrings. Mourning rings served as keepsakes.

Depending on the specific practices of her community, a widow did not leave her home and did not receive any visitors for specific periods of time, during which she spoke only to her family and closest friends. She could then send out black edged cards advising friends and family that her time of deep mourning had passed and she could now receive visitors. Parties, weddings, and other social affairs were forbidden during the first two stages of mourning.

By contrast, a widower was expected to mourn his deceased wife for only three months, simply by displaying black crepe on his hat or armband. A man might wear a black cockade on his lapel as well. Because the family depended on his financial support, he returned to his occupation as soon as the deceased was buried.

Flora Stuart remained in deep morning for fifty-nine years after the death of her husband, CSA Cavalry General J.E.B. Stuart in May 1864. She wore black and remained in seclusion until her death in 1923. 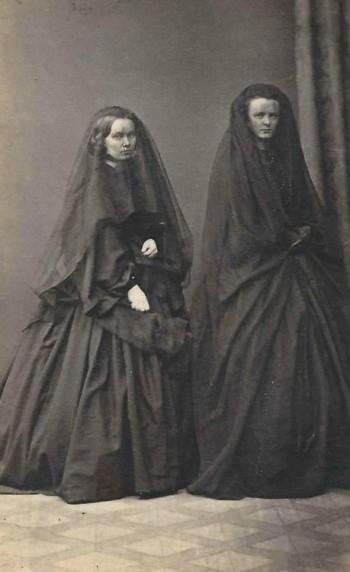 Full Mourning
Full mourning followed deep mourning and lasted nine to twelve months. During this time, a widow could wear white collars and cuffs, add lace to her wardrobe and shorten her black veil. She was allowed to wear gold and silver jewelry, as well as pearls and gemstones.

Half Mourning
The final stage of a widow’s mourning ritual was called half mourning and lasted three to six months. During this stage she was allowed to add more elaborate fabrics with touches of lilac, lavender, violet, mauve, and gray. Subtle prints in any combination of these colors were also allowed. Bonnets were white, lavender silk or straw.

In general, a woman completed the mourning process for a deceased husband in two and a half years. With each stage she slowly became part of society again. Once the three stages of mourning were complete, a widow could store her mourning clothes and begin wearing normal clothing as she slowly joined society again.

Death Hospitals in Field and Town
Soldiers in Civil War hospitals died at an alarming rate, more frequently from disease than from battle wounds. Excerpt from Walt Whitman Complete Prose Works, The Real War Will Never Get in the Books:

The dead in this war – there they lie, strewing the fields and woods and valleys and battle-fields of the south – Virginia, the Peninsula – Malvern hill and Fair Oaks – the banks of the Chickahominy – the terraces of Fredericksburgh – Antietam bridge – the grisly ravines of Manassas – the bloody promenade of the Wilderness … Gettysburgh, the West, Southwest – Vicksburgh – Chattanooga – the trenches of Petersburgh … our young men once so handsome and so joyous, taken from us – the son from the mother, the husband from the wife, the dear friend from the dear friend …

The hospital part of the drama from ’61 to ’65, deserves indeed to be recorded. Of that many-threaded drama, with its sudden and strange surprises, its confounding of prophecies, its moments of despair, the dread of foreign interference, the interminable campaigns, the bloody battles, the mighty and cumbrous and green armies, the drafts and bounties – the immense money expenditure, like a heavy-pouring constant rain – with, over the whole land … an unending, universal mourning-wail of women, parents, orphans – the marrow of the tragedy concentrated in those Army Hospitals – it seem’d sometimes as if the whole interest of the land, North and South, was one vast central hospital …

Changes in Mourning Customs During the Civil War
Although women had always played prominent roles in mourning rituals, the enormous number of casualties brought on by the Civil War necessitated significant changes in mourning customs. During the first year of fighting, Confederate women maintained the rituals of dress and behavior that accompanied death. 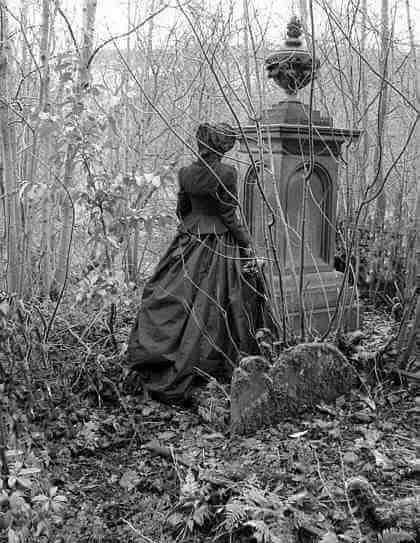 However, as the war and increasing economic hardships progressed, many Southern women simply could not afford to abide by mourning etiquette. With the death of one out of every four Confederate soldiers, women across the region were thrown into a perpetual state of mourning and were often forced to abandon rituals of dress and self-imposed seclusion.

On April 30, 1864, five-year-old Joseph Davis, son of Confederate President Jefferson Davis and First Lady Varina Davis, who broke his neck when he fell from a balcony at the Confederate White House in Richmond. When the First Lady went into mourning for her son, she wore a black dress of inexpensive cotton, in lieu of the lush black fabrics that were no long available.

After John Wilkes Booth assassinated her husband in April 1865, Mary Todd Lincoln wore mourning clothes for the rest of her life. Years later, she recorded her grief in a private letter to a friend:

Time brings so little consolation to me and do you wonder when you remember whose loss. I mourn over that of my worshipped husband, in whose devoted love, I was so blessed, and from whom I was so cruelly torn. The hope of our reunion in a happier world than this, has alone supported me, during the last four weary years.

Not until the end of the Civil War in 1865 was the vast human toll was realized as the number of casualties became apparent (estimated at 620,000). Most families were affected in some way, especially in the Southern states where so many battles were fought. The devastation to the nation’s infrastructure became obvious as whole cities lay in ruin, communication lines were severed, and transportation routes had been damaged. Amongst all this chaos, personal appearance remained a central focus for those women who could gather enough clothing despite the deprivations of war.