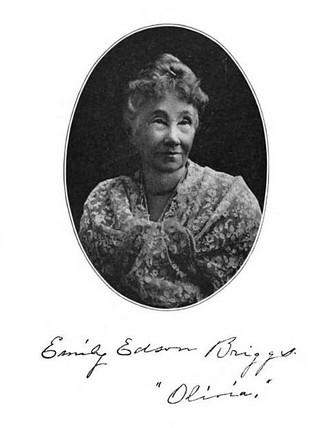 One of the First Women Newspaper Correspondents in Washington

Emily Edson Briggs was a female newspaper reporter in the capital city. She was given access to the halls of Congress during the mid-1800s, which allowed her to describe the people and events there as a social commentator. She was one of the first women to acquire a national reputation in the field of journalism.

Emily Pomona Edson was born September 14, 1830 in Burton, Ohio but moved with her family to Chicago in 1840. She received an adequate education by attending local schools and taught briefly. In 1854, Emily married John Briggs.

In 1861, John Briggs was hired as an assistant clerk for the U.S. House of Representatives, and he wrote about political trends as well. Emily often accompanied him to the Lincoln White House where she became an ardent observer of the social and political happenings surrounding the First Couple.

Career in Journalism
Excerpt from her book, The Olivia Letters, Being Some History of Washington City for Forty Years as Told by the Letters of a Newspaper Columnist (1906), less than a year after the end of the Civil War and the assassination of Abraham Lincoln:

Washington, January 31, 1866,
A close observer in Washington is greatly surprised at the easy transition from a state of war to that of peace. An intelligent person might say there is no true peace. We will leave this discussion to the politicians, and say we are no longer awakened in the small hours of the night by the rumbling of the Government ambulances bringing the wounded and dying from the battlefields to the hospitals. We never shall forget that peculiar sound, unlike that produced by any other vehicle. Perhaps it was the zigzag course the driver often took to avoid any little obstruction in the street, which might jar and aggravate the wounded occupant, that made it seem so long in coming.

In 1870, Briggs wrote a letter to the Washington Chronicle using the pen name Olivia to express her displeasure at the criticism being received by women working at the Treasury – and defending their right to work for the government if they so chose. Her letter was brought to the attention of the owner, and he immediately hired her to write a column.

Briggs developed her talent to observe and report about events and notable characters on the political scene. Publishing under the pseudonym Olivia, she wrote a column for the Chronicle and its sister paper, the Philadelphia Press for more than two decades. The views she expressed in her column about public affairs were always insightful. Although she sometimes wrote about society and fashion, her column was quite unusual for a woman journalist in the nineteenth century.

Although Briggs was one of the first women to be admitted to the congressional press galleries, she observed that it was “a favor that is given at best grudgingly, and never unless the need is imperative” – she said she did not avail herself of this privilege because she felt her presence was not really welcome there.

A chapter in The Olivia Letters is entitled “A Plea for the Negro.” This is an excerpt:

Washington is a Southern city in every sense of the word. It may have been partially redeemed by Yankee thrift during the war, but it is now fast sinking back to its original condition as it was in the days of the “old regime.” Slavery is dead, it is true, but the black man is not a citizen. He is the humblest laborer in the vineyard. But hard as their lot appears, it is far preferable to hopeless slavery; and though thousands of lives of the present generation may be sacrificed upon the altar of freedom, a new future awaits them; and if their Moses has changed his mind, or concluded that he has other work to do, they must bide their time, and raise up a leader of their own race and color, for the Lord has ordained that every people shall work out their own salvation.

This is not a political view of the subject, only a feeble woman’s, who can do nothing for the freedman but utter shriek after shriek for him, which has proved just as efficient as anything that has been done in various quarters. Congress has done all it could do; the Presi dent has promised to be their “Moses,” and the negro persists in suffering. Who is to blame for it? Do they not bring their sufferings upon their own heads? What business have they to be born? Isn’t it a crime of the darkest dye? I leave this painful subject for wiser heads to explain, but should anything new transpire in regard to it, I shall make haste to inform my readers at the earliest moment.

Since the grand speech from the White House one is astonished at the sudden development of a spirit which was supposed to have collapsed with the rebellion. Great flaunting pictures of General Lee appear at conspicuous places to attract the attention of passers-by. He has taken Washington at last. One prominent bookstore balances his picture by that of General Grant ; but a certain other bookstore betrays its ideas very ridiculously by a set of pictures – General Washington being in the center, Jeff Davis on one side and Jesus Christ on the other! Had the shopkeeper displayed the picture of our lamented Lincoln side by side with the assassin Booth my astonishment would have been no greater.

Does the community think treason a crime when such things are allowed in our midst? We hear of no more balls, levees or receptions. It seems as if the early days of the revolution were upon us again, as if we must prepare ourselves for events which possibly might become calamities in the end. New gypsy bonnets are displayed by milliners, but we have not seen a face peeping out from one, either handsome or ugly. And isn’t this a symptom of the earnestness of the times, just as straws show which way the wind blows? I did not mean to write a political letter; but there are times when we are caught in a storm, our eyes blinded with lightning, our ears filled with thunder; rain pouring, and no umbrella; mud deep, and no overshoes. When the storm subsides may we greet our readers under pleasanter auspices.
Olivia.

Emily Briggs’ columns provided descriptions of notable personalities of the day. She covered everything from lavish society dinners to the impending battle for President Andrew Johnson‘s impeachment:

The Democracy are in martial line, defending the independent sovereignty of the States, with Andy Johnson at the head, ready to die for the Constitution. The magnificent decorations which make the Senate chamber a marvel of beauty in the day seemed touched with the fairy hand of enchantment at night.

Women’s Rights
Her column titled “At a Committee Hearing, the Ladies Plead Their Cause at the Capitol” described the stalwart suffragists who testified before a congressional committee:

Susan B. [Anthony] – bless her heart! – faced the Congressional guns. The great pumping power which this woman carries in her brain had lifted the blood into her cheeks, and her eyes blazed with the fire of early day. … [She] commenced by telling the gentlemen that they had it in their power to strike the word ‘male’ out of the Constitution. (Susan has a way of saying the word ‘male’ so that is sounds like the snapping of small arms.)

The above piece was written in 1870, almost fifty years before the 19th Amendment gave women the right to vote in 1920.

The Code: Rules of Etiquette in the National Capital
This is an excerpt explaining the Code from her book The Olivia Letters:

In later years a set of rules has been adopted which was called the Code. It is said all branches of the Government were appealed to in order to be suited, and the rules of the code were the result: …

The President
Business calls are received at all times and hours when the President is unengaged. The morning hours are preferred. Special days and evenings are assigned each season for calls of respect,–one morning and evening a week being assigned for this purpose. Receptions are held during the winter season, generally once a week, between 8 and 10 o’clock in the evening, at which time the guests are expected in full dress, and are presented by the usher.

The President holds public receptions on the first of January and the Fourth of July, when the diplomatic corps present themselves in court costume, and the officers of the Army and Navy in full uniform. The executive, legislative, and judicial branches of the Government are received between the hours of 11 and 12; after which the diplomatic corps officers of the Army and Navy, and civilians en masse.

The President accepts no invitations to dinner, and makes no calls or visits of ceremony but is at liberty to visit without ceremony, at his pleasure. An invitation to dinner at the President’s must be accepted in writing , and a previous engagement cannot take precedence. The address of the Executive in conversation is “Mr. President.” …

The Supreme Court
The judges call upon the President and Vice-President, annually, upon the opening of the court, and on the first day of January. …

The House of Representatives
Members of the House of Representatives call in person on the President on the first day of January, and upon the Speaker of the House on the opening of each session. They also call, bu card or in person, upon the President on the Fourth of July, if Congress is in session, and upon the President, Vice-President, judges of the Supreme Court, Cabinet officers, Senators, Speaker of the House, and foreign ministers soon after the opening of each session of Congress. … [The list goes on, covering every department of the government – the Cabinet, the Senate, etc.]

The ‘Code’ also says that the President accepts no invitation to dinner. This has heretofore been the custom, not because the President was a man, but because the man was a President, and, therefore, it was necessary to give no citizen cause for complaint, for if the President dines with one neighbor, why not with another? …

Ulysses S. Grant proves to the world that he is not above being a man because he has been elected President, and that he has no objection to going out to dinner, provided the viands be substantial and all the beverages pure. But let it be understood, the President does not scatter the bright light of his countenance indiscriminately, for only certain aristocratic dwellings are honored at dinner time by the presence of power.

Emily Edson Briggs later years were as busy as ever. She was elected first president of the Woman’s National Press Association upon its organization in 1882. She often served as a charming Washington hostess herself.

Suffrage became the mantra of women, who would not back down but continued the long and arduous journey begun by their sister suffragists decades ago. The 19th Amendment, which would give women the right to vote, read in part:

Resolved by the Senate and House of Representatives of the United States of America in Congress assembled (two-thirds of each House concurring therein), That the following article is proposed as an amendment to the Constitution, which shall be valid to all intents and purposes as part of the Constitution when ratified by the legislature of three-fourths of the several States.

Congress shall have power to enforce this article by appropriate legislation. 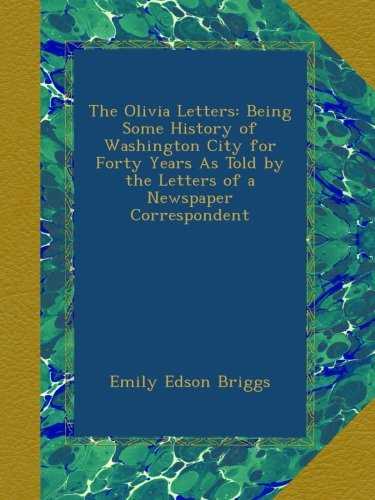 On August 18, 1920, the state of Tennessee narrowly approved the Nineteenth Amendment, with 50 of 99 members of the Tennessee House of Representatives voting yes. This was the final ratification needed to add the amendment to the United States Constitution.

Unfortunately Emily Edson Briggs was not aware of the victory. She had died July 3, 1910 in Washington, DC.