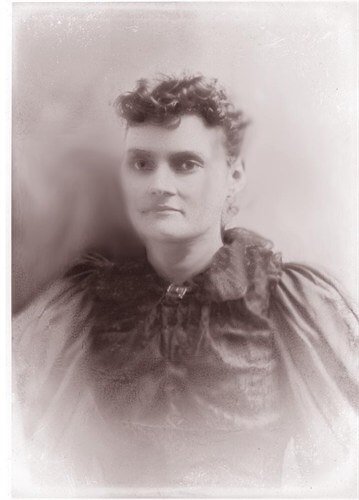 Late in April of 1865, the Mississippi River stood at flood stage. Four years of war had ruined many levees, and the foaming water was over the banks for miles. More people died in the sinking of the steamboat Sultana than on the Titanic 47 years later, yet the tragic story is rarely mentioned in history books. Newspaper reports covered the latest event in the assassination of President Abraham Lincoln: John Wilkes Booth had been killed at a Virginia farm the previous day – April 26, 1865.

Marriage and Family
At the age of 24 Ann met a young sea captain by the name of James Laird. They were married on December 29, 1840 in Liverpool, England. They were only married six months when, on their first sea voyage together Captain Laird drowned when their ship wrecked near a tiny island. Only a few members of the ship’s crew and Ann survived the wreck, and made their way to a samll island close by. They were rescued by a ship passing by them on the third day trapped on the island.

Civil War
Harvey Annis enlisted in the 18th Wisconsin Regiment November 22, 1861, and fought at Shiloh. He accepted a commission as 2nd Lieutenant in the 51st United States Colored Infantry in 1864. He was with his troops at Vicksburg, Mississippi in November 1864 when he became extremely ill with chronic chills and fever, an enlarged spleen, and dysentery.

Ann Annis, with her daughter Isabelle, age 7, travelled from Wisconsin to Vicksburg to care for Harvey while her older daughter remained at home with the other children. Ann took such good care of Harvey that he did not need to be hospitalized; he resigned his commission in the Union Army due to poor health on February 11, 1865.

While they waited for his discharge papers to arrive, Harvey made arrangements to take the steamboat USS Sultana from Vicksburg to Cairo, Illinois. They would then travel by train to their home in Wisconsin. However, his discharge papers still had not arrived; but they were signed and enroute somewhere, and they did not want to wait any longer.


Aboard the Sultana
The Annis family, Harvey in his officer’s uniform, boarded the Sultana, a luxury paddle wheel steamboat for three hundred and seventy passengers. They were given a cabin befitting an officer in the Union Army. Officials on the boat also allowed approximately two thousand former prisoners of war to board this relatively small boat. Harvey and Ann expressed concern about the sagging deck to one of the boat’s officers, but he assured them everything was fine.

A large majority were Union soldiers from the Confederate prison camp at Andersonville, Georgia, who had suffered unspeakable horrors. Most of theses men were weak and undernourished; some were severely ill, barely able to walk. On the way to Vicksburg, they had been involved in three train wrecks, suffering broken bones and other injuries.

The Explosions
In the early morning hours of April 27, 1865 the steamboat Sultana was seven miles north of Memphis, Tennessee.
The Annises were asleep in their cabin when a loud noise awakened them at about 2:00 a.m. Steam rapidly filled the cabin. Harvey led Ann to the stern where he tied a rope from the boat’s bridge. Grasping the rope, Harvey put Belle on his back and descended into the cold floodwaters of the Mississippi, instructing Ann to follow.

What happened next is best explained by Ann Annis herself in the deposition she gave May 11, 1865:

I embarked with my husband on board the steamer Sultana at Viksburg on [April] the 24th. … Sometime during the night [of April 27th], we heard a loud noise, something like the rattling of iron. My husband immediately got up, then looking into [outside ?] the cabin seeing that there was considerable steam there and fearing that it would come into the stateroom, he closed the door and tried to open the one leading out to the guards, but this was jammed by something, and someone outside said ‘we are all stove in.’

My husband then put a life-preserver upon me and one upon himself, and took me and my child to the stern of the boat. He let himself down [holding onto a rope] to the lower deck with the child, and I followed him, but as I was descending the rope a man from above jumped on me and knocked me into the hold of the vessel. From this I was extricated, and my husband, with our child, jumped overboard. I followed as soon as I could but the life-preserver was not placed on me right and I held onto the rudder till I was obliged to let go by the fire [that followed the explosion].

While I remained there I heard a second explosion which seemed to be made up of three great reports like the explosion of shells or gunpowder. I was obliged to take a small piece of board and upon this I was saved.

The sheer weight of over 2,000 passengers on a boat designed for 370 people, was a huge strain on the vessel’s machinery. One of the ship’s boilers, which had been patched a few days earlier but probably should have been replaced, had exploded.

Ann Annis and several others held onto a part of the rudder but were forced to let go because of flames. Ann was burned from her hands up to her shoulders. She managed to grab a piece of wood just before she lost consciousness. When she recovered, she was on the deck of a rescue boat, which transported her to the Gayoso hospital in Memphis where she was treated for shock and other injuries.

Ann told her family afterwards that the last thing she remembered was her husband holding their daughter and seeing his hand slip off the board and watching them sink slowly into the icy water.

This excerpt from The Steamship Sultana Disaster describes what happened next:

The Sultana had been half blown apart by the terrific force of the explosion. Hundreds of sleeping soldiers were blown into the river. With them went great chunks of twisted machinery, a shower of red-hot coals that hissed and spurted as they hit the river, and great fragments of wood, cabin furniture, railings, deck beams, half of the steamboat had simply disintegrated.
The water was icy-cold; many of them could not swim, and there was little wreckage to cling to. Men died by the hundreds in the water near the wreck. They had been half-starved for months and were in no physical shape to swim even if they had known how. …

The flames burst in great fury in a very few minutes after the explosion on the Sultana. No time was allowed for the people to do anything. Ladies rushed forth from their berths in the night attire, and with a wild scream plunged into the angry flood and sank to rise no more. The pitiful cried of children as they, too, rushed to the side of the wreck and plunged into the water were mingled with the hoarser voices of manhood in the desperate struggle for life.

More than 2,000 people were thus compelled to choose between a death by fire and a sleep beneath the wave. Hour after hour rolled away, and the struggle for the great multitude in the river continued. … Yawls, skiffs, and every available small boat was put into immediate requisition and sent out into the stream to pick up the survivors. A considerable number were thus rescued from a watery grave. One lady with an infant in her arms was forced by the current several miles, and was finally rescued by some of the small boats that were cruising around. She exhibited the most remarkable heroism – still clinging to her precious charge and supporting it above the water until rescued. The small boats from the United States gunboats did good service.

At last, the boat struck a small island where there was a little grove of trees and some of those who still were aboard jumped ashore with ropes and made the hulk fast. Slowly, the worst of the flames died down, and finally with the mooring ropes still holding what was left of the Sultana gave up the hopeless struggle and sank, with a great noise of hissing and a huge pillar of smoke and steam rising toward the sky.

When the cold dawn light came, survivors dotted the river all the way to Memphis, clung to logs, rafts, spars, barrels, sections of railing and other bits of wood. All the rescue craft in Memphis put out to do what they could, hauling half-dead men out of the cold river. Hundreds of men were found on both shores of the Mississippi, cling to trees of driftwood, many of them badly burned and without clothing.

Altogether between 500 and 600 men were taken to the Memphis hospitals. Some 200 of these died soon afterward, either from burns or exposure and general debility. For many days after the disaster, a barge was sent out each morning to pick up dead bodies Each night it would come back to Memphis with its gruesome cargo. …

Largest Marine Disaster in the United States
This tragedy remains our country’s largest marine disaster; more passengers were killed aboard the Sultana than on the Titanic.) Only 780 of the Union soldiers survived the Sultana disaster – more than 250 of these later died, leaving approximately 550 who lived to return to their homes in the North.

The first boat on the scene at about 3:00 a.m. was the southbound steamer Bostonia II, which overtook the burning wreck and rescued scores of survivors. Other vessels joined the rescue, including the steamer Arkansas, Jenny Lind, Essex, and the Navy sidewheel gunboat USS Tyler, manned by volunteers.

A sailor aboard the USS Tyler wrote in the ship’s log that “of all the sounds and noises I ever heard that was the most sorrowful; some cursing, calling for help; and shrieking. I will never forget those awful sounds.” The hulk that was left of the Sultana drifted to the west bank of the Mississippi River and sank at around dawn near present-day Marion, Arkansas.

Seven miles north of Memphis, Tennessee, a boiler exploded, starting a disastrous fire on the steamboat Sultana and hurling hundreds of people into the cold Mississippi River.

By most accounts, Ann Annis was one of only two women who survived the ordeal. She remained at Memphis for at least a month, going from morgue to morgue, viewing hundreds of bodies – searching for those of her husband and little daughter. Bodies of victims continued to be found downriver for months, some as far as Vicksburg. Many bodies were never recovered.

When Ann arrived at Oshkosh, she found that her oldest son (from her second marriage) had run away and joined the army. Another had tried to join, but was too young. He signed on as a mule-train driver and then went into the regular army. This left only the two younger boys and her older daughter.

She passed down stories of her experiences to her children and grandchildren, and she always wore long sleeves with lace at the wrist to cover her scars. The deeper scars remained with her until her death.

Ann Vessey Laird Simms Annis outlived four of her children and her three husbands. She died at age eighty in Oskosh of a stroke or cerebral hemorrhage.