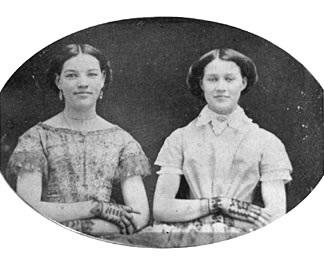 Women Who Settled the Midwest and the West

Image: Mollie Dorsey Sanford
Mollie, left, and her sister Nan
In 1857, the year they moved to Nebraska City

Mollie Dorsey Sanford was a young bride who crossed the plains – from the Missouri River to the Rocky Mountains – during the Colorado Gold Rush. Her diary, published as Mollie, the Journal of Mollie Dorsey Sanford in Nebraska and Colorado Territories 1857 to 1866 (1959), is regarded as one of the most accurate accounts of life on the frontier and an important document in the history of the American West.

Backstory
The Midwestern United States (or Midwest) is a name for the north-central states of the United States of America. The states that are part of the Midwest are Illinois, Indiana, Iowa, Kansas, Michigan, Minnesota, Missouri, Nebraska, North Dakota, Ohio, South Dakota, and Wisconsin.

Until the 1870s, the story of the settlement of the Midwest was presented from the perspective of male pioneers. William Fowler’s Woman on the American Frontier: A valuable and authentic history of the heroism, adventures, privations, captivities, trials, and noble lives and deaths of the pioneer mothers of the Republic (1878) was one of the first books to relate the stories of pioneer women.

These early narratives reveal that the women who lived on the frontier not only helped with farm chores, but they could run the farm while the men worked elsewhere to supplement their income. These women endured isolation, food shortages, illnesses and deaths of family members, and the dangers of wild animals.

Early Years
Mary “Mollie” Dorsey was born December 17, 1838 in Rising Sun, Indiana and grew up in Indianapolis. Her family later moved to Nebraska City, Nebraska where she started a diary about her life in the Midwest. Cheap farmland lured Mollie’s father to the Nebraska Territory in 1857, where he claimed land on the Little Nemaha River. There, he made a home for his wife and eight children a long wagon ride from the nearest town of Nebraska City. Mollie, the oldest, was 18.

Within a few weeks, 30-year-old bachelor Byron North Sanford from Albion, New York arrived in the area. Trained as a blacksmith and wagon maker, Sanford had found work in Terra Haute, Indiana. In 1857, the factory where he worked burned down. Sanford claimed a nearby homestead and captured Mollie’s heart.

Pikes Peak Gold Rush
In 1858, prospectors found modest amounts of gold in Colorado Territory. Newspapers in Nebraska City and other Missouri River towns exaggerated the discovery, and Nebraska City quickly became a staging area and starting point for wagon trains heading west. In 1859 a full-fledged gold rush began, and the trails across Nebraska and Kansas were crowded with gold seekers. Pikes Peak is the highest summit of the southern Front Range of the Rocky Mountains.

In the spring of 1860, there was another Gold Rush composed of persons described as more orderly and more determined than those of the previous year. In February 1860, Mollie Dorsey married Byron Sanford in her parents’ kitchen. Hoping to take advantage of the economic opportunities in the gold fields, the Sanfords and another couple began the eight-week journey to the Colorado Territory by ox-drawn wagon in April 1860.

The American West is an area that includes the Mountain States of Arizona, Colorado, Idaho, Montana, Nevada, New Mexico, Montana and Wyoming; and the Pacific States of Alaska, California, Hawaii, Oregon and Washington. 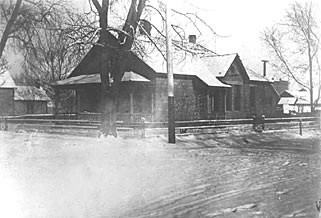 Trails by which the emigrants traveled were chosen carefully. To get the two essentials, water and grass for the traveler’s animals, the emigration trails followed river valleys across the North American continent. The route the Sanfords took led them across the Missouri River and on to Fort Kearny in central Nebraska Territory, then along the Platte River to the junction of the two forks. From there they followed the south fork, the South Platte River. Mollie continued recording her experiences in a diary. In one entry she wrote, “I have been a bride four months tonight … the weather is so hot and we are so dusty and dirty.”

A killer storm struck the Sanfords on June 5, a terrible storm of rain and wind with the worst thunder and lightning Mollie had ever seen. When it was over, and the family once more on the road, they passed a fresh grave:

A poor fellow was killed by lightning, wagon and contents burnt. Someone had hurriedly scooped a hole and put him in. By the grave his charred hat, and the body of his dog lay.

The emigration is pouring in at the rate of over 500 men each day and increasing daily. On May 23, a Mr. Hinckly, who had arrived by the previous Saturday’s Express, was quoted in the News as saying that “at Plum Creek he was told that 500 wagons had passed the day before, and that, 11,000 wagons had passed this spring prior to the first of May.”

On June 20, [miner] Wilk Defrees reported that on his trip from Denver to Fort Kearny he had met 4,925 teams. At an average of five persons to a wagon, he figured the total to be at least 24,625 emigrants. He also noted: “I think we must have met from eight to ten hundred ladies on the route, most of whom were ladies accompanying their husbands for the purpose of permanent settlement.”

The presence of women was something entirely new along the road to Denver City. Only men, called Fifty-Niners, had streamed into the Pikes Peak Country of western Kansas Territory and southwestern Nebraska Territory in 1859. By 1860, however, emigrants began to notice “whole families of women and children.” Many of the Fifty-Niners had hastened back home the previous fall and returned in the spring with their families.

Many emigrant women rode saddle horses, though most were in ox-wagons. All seemed to enjoy the trip, though each invariably apologized for her untidy looks.

Once they were traveling on the South Platte River, the gold seekers began to meet people on their way back to the States. Mollie Sanford wrote in her diary:

Some were returning for their families, while others were shaking the dust of Denver from their feet, and cursing the place and the people. Just west of the Upper Crossing an old fellow came into Mollie’s camp one evening, looked up at the women present and remarked: “My dear women, you’ll rue to your dying day ever having set your feet on that thar miserable Pikes Peak.”

Queen City of the Plains
As this tide of humanity continued West, mountains began to appear like faint clouds on the horizon, first Long’s Peak to the west, then the Sugarloaf outlines of Pikes Peak off to the southwest, and finally the great blue barrier of the front range itself. At the base of the mountains lay Denver City, Queen City of the Plains, gateway to the land of gold as well as ruined health and shattered dreams.

The Sanfords reached Denver City in June 1860 and camped along the banks of the Cherry Creek which runs through the town. Denver City was founded in Kansas Territory in 1858; in 1861 it became part of Colorado Territory. It is located in the South Platte River Valley on the western edge of the High Plains, a subregion of the Great Plains just east of the Front Range of the Rocky Mountains – the first mountain range encountered moving west across the plains.

Mollie and Byron soon discovered that any free gold that could be easily found was long gone. Byron was approached by a man from the western Boulder County community of Gold Hill, who offered Byron a job if Mollie would cook for twenty gold miners. In Gold Hill, she found the wood stove small and drafty, and the work overwhelming. When the men sang Home Sweet Home, she cried. 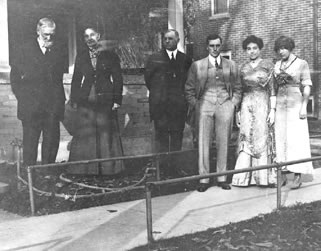 Civil War
The same year that Colorado became a territory, the American Civil War broke out. Byron was commissioned as a second lieutenant of Company H, First Colorado Volunteers of the Union Army, and Mollie followed his regiment up and down the Front Range. In 1862, he participated with Colonel Chivington in two battles, Apache Canon and Pigeon’s Ranch, in New Mexico.

In 1864, Byron was looking for hay for the army horses when he stopped at the homestead of two Georgia brothers along the South Platte River. The men were suffering terribly from the cold. Byron asked what the price was for the homestead, and they responded $1,100. Byron said all he had was $800 in gold dust. Just then a cold blast of air blew open the cabin door; the Georgia boys took the gold dust and headed south. Byron had purchased a homestead of 160 acres located in the community of Littleton, about ten miles from Denver City, which they leased out.

After Byron had returned from the war, Mollie gave birth to a healthy baby boy and a few years later, a daughter. The Sanfords eventually settled in Denver City, where Byron worked in the melting and refining department of the United States Mint. Byron worked at the mint for forty years while Mollie kept a confortable home and raised their two children, Albert and Dora. Byron was a member of the commission which selected the site for the University of Colorado at Boulder and he served as a trustee of the University.

The Sanford Children
Son Albert B. Sanford built a stone house on a large lot one block from Littleton’s Main Street and added an iron fence around two sides of the property. He added many trees to the lot and held several Fourth of July parties there. Albert shot off rockets for the entertainment of the neighborhood children. Albert studied mining engineering at the University of Denver. After graduating, he opened an office in Denver, and for twenty years was an assayer and mine examiner. In later years, he served as assistant curator for the Colorado State Historical Society.

Dora’s daughter Virginia attended the University of Wyoming and was a co-founder of the Littleton Historical Museum. She then taught at a school in Riverton, Wyoming for six years. She and her husband settled in Littleton in 1940 and eventually moved to the Sanford Ranch. 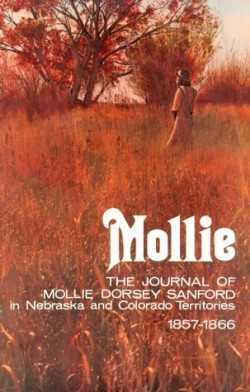 Image: Mollie, the Journal of Mollie Dorsey Sanford in Nebraska and Colorado Territories 1857 to 1866, edited by Daniel F. Danker, was published in 1959.

Mollie left her diary to Dora’s son in her will. “Not from any especial merit it (the journal) possesses,” she said, “but because I do not want to be forgotten.”