Painter of Politicians and Officials in Washington DC 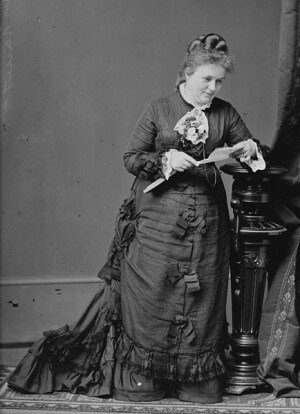 Cornelia Adele Fassett was an American artist known for her political paintings and portraits. Her most famous work, The Florida Case Before the Electoral Commission (1878), now hangs in the United States Capitol. Her paintings of the Supreme Court and Justices are in the art collection of the U.S. Supreme Court.

Image: Cornelia Adele Strong Fassett
Between 1865 and 1880
Library of Congress

Personal Life
Cornelia Adele Strong was born November 9, 1831 in Owasco, New York, the third of six children of Captain Walker Strong and Sarah Devoe Strong. Cornelia was raised in Jefferson, Ohio, where her father was a hotel keeper. On August 26, 1851 Cornelia married Samuel Montague Fassett, an artist and photographer primarily known for his daguerreotypes. The couple had eight children.

In 1852, Cornelia Adele Fassett studied art in New York City with Scottish artist J.B. Wandesforde, who taught her how to paint miniatures. She then spent three years (1852-1855) in Paris and Rome studying under Giuseppe Castiglione, Henri Fantin La Tour, and Lambert Joseph Matthew. Cornelia and Samuel Fassett then moved to Chicago, where they were prominent in the art community.

Painting of Abraham Lincoln
According to the records of the Grand Army of the Republic, who now has this painting in their collection, Abraham Lincoln posed for Cornelia Adele Fassett in 1860. However, her portrait of him is quite similar to a photograph of Lincoln taken by her husband in 1859. It is possible that she created the painting using both sources. Fassett’s painting shows a clean-shaven Lincoln; he grew a beard just after being elected to the presidency.

As the federal government struggled to finance the Civil War and care for the many Union soldiers injured in battle, Fassett donated this watercolor portrait of Lincoln to the Northwestern Sanitary Fair held in Chicago’s Bryan Hall in 1863. The fair organizers raffled it “for the benefit of the sick and wounded soldiers.” 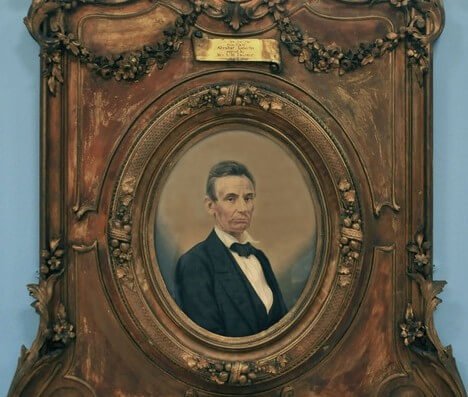 In 1875 the Fassetts moved to Washington DC, where Cornelia painted portraits of important government officials, while Samuel served as official photographer to the Supervising Architect of the United States Treasury Department.

A year after their move, her group portrait of the Supreme Court justices was shown at the Philadelphia Centennial Exhibition of 1876, the first official World’s Fair in the United States. The Exhibition was held from May 10 to November 10, 1876, to celebrate the 100th anniversary of the signing of the Declaration of Independence. It is now in the collection of the Supreme Court of the United States.

Presidential Election of 1876
The United States faced a major challenge with the disputed Hayes-Tilden presidential election of 1876. Democratic candidate Samuel J. Tilden won the popular vote by 250,000 votes, and preliminary tallies from the Electoral College showed that Tilden would likely defeat Rutherford B. Hayes, his Republican opponent.

However, 185 votes were required to win a majority in the Electoral College. When all votes were counted in the following days, Tilden had received 184 electoral votes; Hayes only 165. Twenty ballots from four states – Florida, Louisiana, South Carolina, and Oregon – were in dispute and said to be the result of electoral fraud. Both Democrats and Republicans charged that ballots from those states had been altered and voters intimidated. Tilden required only one of these disputed votes to become president; Hayes needed all twenty.

In Florida, the Republican-controlled returning board threw out votes from several areas, citing fraud and voter intimidation. As a result, Hayes won Florida’s four electoral votes. A nearly identical scenario played out in Louisiana, where the returning board disallowed numerous ballots, delivering the election to Hayes. Similar problems arose in South Carolina and Oregon. The resolution of these disputes would determine the outcome of the election.

Electoral Commission
An impasse continued well into January 1877; neither Republicans nor Democrats were willing to concede the election. The responsibility for resolving the conflict fell to the U.S. Congress. But while the U.S. Constitution gives Congress certain election responsibilities, it gives no guidance when dealing with disputed Electoral College votes.

Finally, on January 29, 1877, Congress passed a law forming the Electoral Commission to review the ballots in those four states and to determine the outcome of the presidential election of 1876. The commission was composed of fifteen members from both parties: five Representatives, five Senators, and five Supreme Court Justices. Eight members were Republicans; seven were Democrats. One independent justice, Joseph P. Bradley, was included to ensure partisan balance. Bradley had been appointed to the high Court as a Republican, but the Democrats agreed to accept him on the panel.

The Electoral Commission held its first public hearing on February 1, 1877. Elected officials, cabinet members, the press, and prominent men and women of Washington society crowded into the Capitol’s Supreme Court Chamber. A long and bitter debate began with the Florida case, and these historic deliberations continued for nine days, the outcome of the election hanging in the balance.

Bradley, the so-called independent justice, ultimately joined the Republicans. The Commission subsequently awarded all twenty disputed votes to Hayes, thus assuring a Republican victory in the Electoral College by a margin of 185-184. Democrats protested at first, but once the government promised to remove federal troops from the South and to bring Reconstruction to an end, they accepted the decision. Congress declared Rutherford B. Hayes the new President of the United States on March 2, only two days before his term began.

During the summers of 1877 and 1878, government officials permitted Fassett to set up a temporary studio in the U.S. Capitol’s Supreme Court Chamber while the Court was not in session. Her aim was to paint a group portrait of the Electoral Commission’s 1877 meeting which took place in that room. Fassett included virtually every person involved in the 1877 political crisis, as well as other prominent figures of that time. 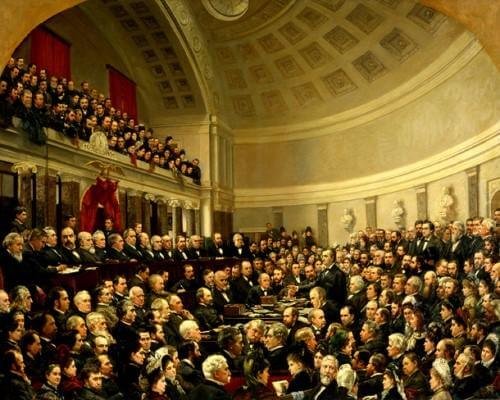 Image: The Florida Case before the Electoral Commission
Oil on canvas, by Cornelia Adele Fassett
This painting now hangs on the third floor of the Capitol.

Among the 256 persons in Fassett’s painting, a virtual who’s who of Washington society, more than 60 are women. Some are wives or daughters of public officials; others are professionals. Fassett depicted seventeen female journalists in the press gallery. She also included herself (lower center), holding her sketchbook. She based some of the figures on existing images taken by famous Civil War photographer, Mathew Brady. Several relevant Brady photographs survive, including one of Fassett herself.

One of the most prominent professional women in Washington DC at the time was Mary Clemmer Ames. A journalist and Washington correspondent for the New York City Independent, her column, Woman’s Letter from Washington, was very popular. Ames is located in the lower right corner of the painting, looking at the viewer, immediately below African American abolitionist Frederick Douglass.

The completed work, painted in oil on canvas, measures 75 inches in width and 60 inches in height. The artist identified herself in the lower right corner as C. Adele Fassett / 1879. There is a key that identifies each person in the painting.

Early in 1879, the U.S. Senate defeated a bill to purchase the painting, stating that the event was one “about which party passions are still excited.” Seven years later, once the controversy died down, Congress purchased the painting for $7,500.

Today Fassett’s dramatic oil painting, encased in a richly gilded Victorian frame, hangs on the third floor of the Capitol, near the entrance to the Senators’ Family Gallery.

After Cornelia Adele Fassett’s death on January 4, 1898, the Washington Post described her as “one of the best-known artists and portrait painters in the United States.”