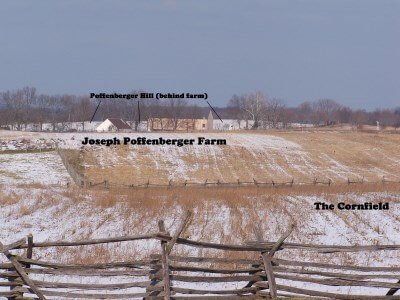 Field Hospitals at the Battle of Antietam

During the Battle of Antietam, farms owned by Joseph, Samuel, Alfred and John Poffenberger were used and abused by military personnel. The families passed down stories of hiding livestock and household valuables from the hordes of soldiers who were plundering farms and homes. A teenager at the time, Otho Poffenberger, son of John Poffenberger, fled with other members of his family to the safety of Shepherdstown, four miles away in what is now West Virginia.

Joseph Poffenberger Farm
Joseph Poffenberger purchased this farm from his father-in-law in 1851. On the afternoon of September 16, 1862, the nearly 8,600 men of General Joseph Hooker‘s I Corps of General George B. McClellan‘s Army of the Potomac crossed over Antietam Creek and advanced to the Joseph Poffenberger Farm. Hooker selected this location because the North Woods – at the southern end of the farm and at the northern edge of the battlefield – would hide his preparations for an attack on Confederate positions around the Dunker Church about a mile to the south.

The Federal plan was to open the battle by attacking the Confederate left flank, under the command of General Stonewall Jackson, located between the Miller Cornfield and Dunker Church. While General Hooker slept in the barn, his men camped in and around this house and outbuildings, passing the evening and the damp darkness in bivouac – without shelter or fires. They would be the spearhead of the Union effort the following morning.

Before dawn the next morning, with fog covering the fields and buildings like a shroud, Captain J. Albert Monroe of Battery D of the First Rhode Island Light Artillery was having breakfast:

It was the early gray light that appeared just before the sun rises above the horizon, and we could little more than distinguish each other. We had not half finished our meal, but it had grown considerably lighter, and we could see the first rays of the sun lighting up the distant hilltops, when there was a sudden flash, and the air around us appeared to be alive with shot and shell from the enemy’s artillery.
The opposite hill seemed suddenly to have become an active volcano, belching forth flame, smoke and scoriae. The first shot apparently passed directly through our little breakfast party, not more than a foot or two above the blanket, and it struck the ground only a few feet from us. Every one dropped whatever he had in his hands, and looked around the group to see whose head was missing.

Attack!
At 5:43 a.m. on September 17, General Hooker sent the men of General John Gibbon‘s Iron Brigade toward Dunker Church, expecting them to move down the Old Hagerstown Pike and strike into the Confederates. As the three brigades of General James Ricketts’ Division emerged from the strip of trees known as the North Woods on Joseph Poffenberger’s Farm, they met a thunderous fire from Confederate artillery, causing casualties and great confusion. As it grew lighter, Hooker saw the glint of the bayonets of Rebel troops massed in the cornfield.

General Hooker described the early morning fight in the cornfield in his report:

We had not proceeded far before I discovered that a heavy force of the enemy had taken possession of a cornfield (I have since learned about a thirty-acre field), in my immediate front, and from the sun’s rays falling on their bayonets projecting above the corn could see that the field was filled with the enemy, with arms in their hands, standing apparently at ‘support arms.’ Instructions were immediately given for the assemblage of all of my spare batteries near at hand, of which I think there were five or six, to spring into battery on the right of this field, and to open with canister at once. In the time I am writing every stalk of corn in the northern and greater part of the field was cut as closely as could have been done with a knife, and the slain lay in rows precisely as they had stood in their ranks a few moments before.

It was never my fortune to witness a more bloody, dismal battlefield. Those that escaped fled in the opposite direction from our advance, and sought refuge behind the trees, fences, and stone ledges nearly in a line with the Dunker Church, etc., as there was no resisting this torrent of death-dealing missives. … The whole morning had been one of unusual animation to me and fraught with the grandest events. The conduct of my troops was sublime, and the occasion almost lifted me to the skies, and its memories will ever remain near me. My command followed the fugitives closely until we had passed the cornfield a quarter of a mile or more, when I was removed from my saddle in the act of falling out of it from loss of blood, having previously been struck without my knowledge.”

Astride his white horse, Hooker had been struck on the inner side of his right foot by a minie ball, and he was taken to the Philip Pry farm for treatment. For him, the Battle of Antietam was over. General George Meade, who succeeded Hooker, withdrew the I Corps to Poffenberger’s, where it had bivouacked the night before. It had suffered severely, having lost 2470 killed and wounded. 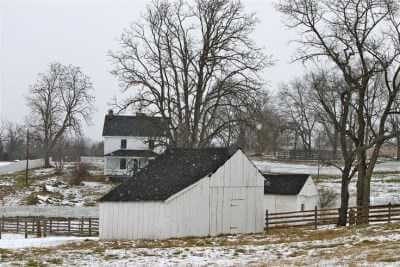 Field Hospitals
Although the intense fighting occurred south of the Joseph Poffenberger farm, its grounds were soon covered with wounded soldiers, medical facilities, and supply wagons. As the battle raged, waves of men set off from the Poffenberger Farm and then retreated to it, while shells struck around the premises. Some of the wounded in Miller’s cornfield made their way back to Poffenberger’s farm, where a makeshift hospital was set up in the barn. Nurses tended the wounded here.

Surgeon J. L. Dunn seemed to be more entranced by the sounds of the battle, but the wounded would soon occupy all his time. He reported in a letter to his wife:

To be in a place where no less than 150,000 muskets are being discharged continuously, then add to that 300 cannon whose roar – equal to the loudest clap of thunder – is a fearful thing, no person can have any conception of it.

Samuel Poffenberger Farm
Jacob Poffenberger purchased this farm in 1854, a farm of 150 acres just north of the East Woods. Jacob’s son Samuel Poffenberger married Catherine Doub January 24, 1861. Samuel Doub bought the farm for his daughter Catherine and her husband April 1, 1862. The young couple were about to harvest their first crop when the peace and quiet along Antietam Creek was interrupted by the Battle of Antietam. During the battle, they went to his father’s place. Their home was used as a hospital for nineteen days, and approximately 140 men died there.

Many sources state that Clara Barton tended to the wounded on the Joseph Poffenberger farm while the battle took place, and a monument to her was later placed on that farm. However, her description of the cellar in the house where she cared for the wounded identifies the property as the Samuel Poffenberger Farm, three-quarters of a mile to the southeast.

While the battle still raged that morning, Clara Barton arrived on the battlefield, and began nursing the 300 wounded men who were being treated at Samuel’s farm. In her bonnet, red bow and dark skirt, she worked non-stop until dark, caring for the men with medical supplies she brought in her own wagon, and assisting the surgeons with their work. She prepared food for the soldiers in the farmhouse and carried water from the spring on the property.

After three days, Clara Barton collapsed from lack of sleep and the typhoid fever she had contracted from the soldiers. She was transported to Washington, DC, lying in a wagon, exhausted and delirious, but she soon regained her strength and returned to the battlefields of the Civil War.

During the battle of Antietam, Mr. Poffenberger was compelled to leave his home which was used as a hospital for nineteen days. Unionists and Confederates were cared for there and General Payne, a Confederate officer, died in the parlor. His home was the death scene of about 140 men. The spring on the farm furnished water for the wounded and dying soldiers.

Anna Morris Holstein
During the early stages of the war it was common for women to go into the field as nurses with a particular regiment to care for soldiers from their home town and vicinity. Husband-wife teams were not uncommon: Philadelphia Episcopal minister William Holstein and his wife Anna Morris Holstein were quite wealthy, but they left their comfortable home and traveled to Sharpsburg to help with the wounded. Anna noted, “we have no right to the comforts of our home, while so many of the noblest of our land renounce theirs.”

The couple enlisted with the U.S. Sanitary Commission. Their first experience caring for the wounded was at Antietam, and Anna struggled with the grisly realities of war. She later admitted that she was of little use until she could gain her composure. Even after she was more experienced, Anna sometimes succumbed to emotion. They worked out of several hospitals located in private houses in and around Sharpsburg. Anna Holstein kept a diary her experiences, which was published as Three Years in Field Hospitals of the Army of the Potomac (1867).

Of one hospital Anna Holstein wrote:

In this uncomfortable little place crowded with boxes and swarming with hospital flies, the six ladies continued their labors during the day, waiting and working faithfully among the wounded.

Other female care providers at Antietam included Helen Gilson, Arabella Barlow and Mary Morris Husband worked at various hospitals in and around Sharpsburg. 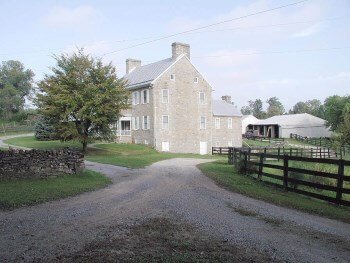 Devastation and Ruin
When the battle was over, Poffenberger families returned to find farms devastated, crops destroyed and homes and barns burned. Buildings had been turned into field hospitals, sheets shredded for bandages, crops trampled, fences used for firewood and hay for bedding. Joseph Poffenberger found his house completely empty. He and his family lived on army crackers he found on the battlefield for five days. Although the armies moved on, the wounded would remain for up to a year, and disease would descend upon the valley, killing many Sharpsburg civilians.

Following the Civil War, Joseph’s nephew Otho Poffenberger came to help with the farming. In September 1876, four outbuildings, including the barn, were destroyed by fire. The present barn was presumably rebuilt by Otho on the original barn foundation. Otho and his wife Elizabeth eventually bought Joseph Poffenberger’s farm, and added an addition to the house. The Poffenberger patriarch then retired to Grove Farm, which had been used as a headquarters for Union General Fitz John Porter during the Battle of Antietam.

The Battle of Antietam has the regrettable distinction of being the bloodiest one-day battle in American history. A total of 23,000 men were killed, wounded or captured; 3650 soldiers were killed – 2100 Unionists and 1550 Confederates. Six generals were killed or mortally wounded, three from the Union army and three Confederates. Photography had advanced during the war, and Antietam was the first battlefield photographed before the dead were buried.