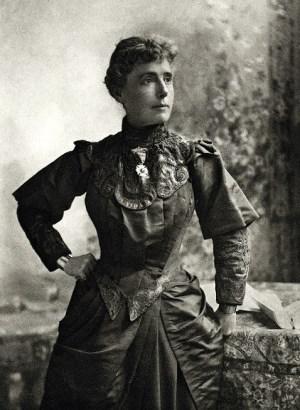 Career in Journalism
Kate Field began a writing career while living in Florence, Italy from 1859 to 1861, sending articles to several American newspapers and magazines. Field became one of the first women reporters, serving as correspondent for the New York Tribune, New York Herald, Atlantic Almanac and other papers. In 1861, Atlantic Monthly published her memoir about Elizabeth Barrett Browning, whom she met in Europe.

She was strikingly attractive – often called bonny Kate Field. In October 1860, while visiting his mother’s home in Florence, Italy, Kate met famous British novelist Anthony Trollope and became one of his closest friends. Over the years, scholars have speculated about their friendship. Trollope wrote in his memoirs, An Autobiography (1883):

There is an American woman, of whom not to speak in a work purporting to be a memoir of my own life would be to omit all allusion to one of the chief pleasures which has graced my later years. In the last fifteen years she has been, out of my own family, my most chosen friend. She is a ray of light to me, from which I can always strike a spark by thinking of her.

Back in the States, Field worked for several years as a freelance journalist beginning in the mid-1860s, writing more than one hundred pieces for the New York Herald Tribune alone. She contributed articles to a wide range of publications, about topics such as literature, theater, and exhibitions. By the end of the decade, Field had become a celebrity, mostly because of her coverage of the 1867-1868 American tour of Charles Dickens, then the world’s most famous author.

Career as a Lecturer
Writing for newspapers and magazines brought her recognition, but lecturing was one of the few well-paying careers available to American women at that time. Because it was more lucrative, Kate Field periodically fell back on lecturing for the rest of her life, becoming one of America’s premier lecturers at a time when touring public speakers were a great source of information and entertainment. She converted her articles on Charles Dickens into one of the lectures she later delivered to popular acclaim at halls around the country.

Field moved to London for more than four years in the 1870s, where she was more successful as an actress and playwright. She also continued to work as a journalist, reporting on political and social events for American newspapers. In the late 1870s Field became a publicist for Alexander Graham Bell and his British telephone company, and helped to introduce the telephone to the U.S. and Great Britain. Henry James was admittedly inspired by Kate Field to create the character of journalist Henrietta Stackpole in his novel, The Portrait of a Lady.

Confident that her one-woman play, Eyes and Ears in London, would finally give her success on the stage at home, Field returned to the States and took her show on a tour of the Northeast. The show was popular and received good reviews, but she soon lost money and reputation in a fashion venture in New York City. She established the Cooperative Dress Association to provide good clothes to women of limited incomes, but it failed miserably. She then wrote a series of articles against Mormon polygamy and another series in praise of Alaska.

In the summer of 1885, Kate Field stayed with friends at Glen Haven, New York and at a new hotel there; she wrote three lectures while she was there: “The Mormon Monster,” “Polygamy in Utah,” and “Social and Political Crimes in Utah.” She later delivered these speeches across the country. Newspapers around Glen Haven were not exactly kind. The article, “A Picture of Kate Field,” appeared in the Syracuse Standard August 9, 1885:

Her hair is dark and her teeth remarkably beautiful. I should characterize her manner as brisk and self-poised and to strangers uncourteous; in fact, she is lacking in that fine graciousness which is most often found in those of noble nature… To see her pick her way through a crowded piazza as if she were going through a field of teasels is a study. But to see her enter the sanitary bathroom is something to be remembered. The ladies who may happen to be there might as well be the bath tubs as far as Miss Kate Field is concerned… She is also a good horsewoman and very independent in the matter, too, as she can – and sometime does – go into the stable and saddle her own horse. To sum her up on the words of one of the proprietors here, “She is a lady who knows her own mind, knows what she wants, intends to have it, and is willing to pay for it.”

Kate Field lived life on her own terms. She remained single, had a career, earned her own money, and was a feisty activist. She thought the whole concept of marriage was odd. She is largely remembered only for one of her sayings: Kate Field’s Washington
Between 1890 and 1895, Field edited, published and wrote much of the copy for Kate Field’s Washington, a sixteen-page weekly newspaper she established. The paper reported news, and political and cultural events taking place in the capitol, most of it provided by Field herself from her own files, constant travels, and active role in Washington’s social life. We do not know how much discrimination, sexual harassment and criticism she might have endured from the good old boys in the newspaper and magazine trade.

Among the political causes Field supported in her publication were civil service reform, immigrant voting rights, and opposition to the admission of New Mexico as a state (because many residents spoke only Spanish).

Overwork and Poor Health
Kate Field habitually worked herself to exhaustion and was then forced to take time to recover. As she aged, the effects on her health became more pronounced, but she failed to recognize the inherent danger in such a regimen. In a letter to subscribers of Kate Field’s Washington dated April 25, 1895, she explained her current situation:

I am peremptorily ordered to stop editing. An attack of “grippe,” added to excessive work, forces me to give myself an interval of rest from the unceasing care of journalism. Without health, life is a delusion, and as I have had no vacation for more than five years, nature rebels. Unfortunately I cannot relegate my work to another as personal journalism demands personal presence. Self-preservation being the first law of nature, I must postpone the next issue of the Washington for at least a year. …

She never returned to the paper… From a refuge in France she wrote:

I scorn hair pins and let my hair roll in a fine frenzy down my back. I bathe in the sea and have an appetite that would do credit to a boa-constrictor. The amount of bread and milk I consume is appalling. Cows run when they see me approach and bakers gaze upon me as a special Providence.

In 1896, she went to the Hawaiian Islands for a much-needed rest, but instead went on a fact-finding mission, looking for supporters of the annexation of Hawaii. While working on a story about the culture of the Islands, she fell ill.

Kate Field died May 19, 1896 of pneumonia in Honolulu at age 57. As she had specified, her body was cremated and her ashes brought to Cambridge, Massachusetts for burial.

The May 1896 obituary that appeared in the New York Times called Field “one of the most versatile of her sex in this country” in her roles as “litterateur, lecturer, actress, drama critic, author, newspaper woman in all that the title implies.” The New York Tribune described her as “one of the best-known women in America.”

Although she was well-known and celerated during her lifetime, Field has been ignored by history. Her friend Lilian Whiting published Kate Field: A Record (1899), a biography that consists largely of excerpts from Field’s letters. Whiting apparently later destroyed those letters, as well as Field’s lifetime of diaries.