Anne Whitney was a poet and sculptor who fought to become an artist in a society that did not readily accept female sculptors; sculpture was considered a masculine art form. As with so many of the first 19th century women sculptors, Whitney was a member of a wealthy and supportive family, who helped her financially while she developed her natural talents.

Early Years
Anne Whitney was born September 2, 1821 in Watertown, Massachusetts; she was the daughter of well- to-do farmer Nathaniel Whitney and his wife Sarah Stone Whitney. Her supportive and liberal parents encouraged Anne to develop her artistic talents.

In 1846 she opened a small school in Salem, Massachusetts, which she ran from 1846 to 1848. During that time she began to write verse and her work appeared in magazines such as Harper’s and Atlantic Monthly. She became well known as a poet, and two volumes of her collected poems were published in 1859.

Career in Art
Shortly before her book of poetry was published in 1859, Anne Whitney made the unconventional decision to become a sculptor. Her earliest known work is a portrait bust (shoulders and head) of a young girl named Laura Brown (1859). She also sculpted members of her family and painter Abby Adeline (Addy) Manning, whom she met in 1862. During the 1860s she exhibited her work at De Vries, Ibarra and Co. Gallery in Boston.

Anne Whitney was politically active, and she supported several social reform movements, including abolition and women’s equality. Her choice of subjects to portray in sculpture – abolitionists, feminists, and blacks – reflected her political and social beliefs. This excerpt from an article about Whitney at Nineteenth Century Art Worldwide sheds a little light on her choice of lifestyle:

Her support of the suffrage movement, and her friendship with many of the women who were driving forces behind it, may explain her determination to take alternative paths in her own life. Rather than marrying and raising children (the average age of marriage was about 23 for women at the time), she focused on developing her creative abilities. …

Eager to learn more sculpting techniques, Anne Whitney moved into a studio next door to Boston sculptor William Rimmer in 1862 and began studying with him.

Soon after, Whitney modeled in plaster what historians believe to be the first male nude sculpted by an American woman. Her first life-sized work was Lady Godiva, an 11th century English noblewoman who rode on horseback through the streets of Coventry covered only by her very long hair, to protest the unreasonable taxes imposed by her husband on his tenants.

While living in Boston, Whitney befriended women sculptors Harriet Hosmer and Edmonia Lewis, who had recently moved from Ohio to Boston and was Whitney’s student for a short time.

The beginning of Whitney’s sculpture career coincided with the beginning of her most important relationship. While living and studying anatomy in Brooklyn, she boarded at the home of Richard Manning, a friend to her brother, and met Manning’s daughter, aspiring painter Adeline Addy Manning. A deep and abiding love developed between the two women.

Studying in Rome
Like many American sculptors, Anne Whitney moved to Italy in 1867, at age forty-six. She settled in Rome, where Boston sculptors Hosmer and Lewis were already living, and made contact with established artists like Emma Stebbins and Vinnie Ream. These women worked primarily in the Neoclassical style, producing massive sculptures of historical figures. Whitney and Addy Manning traveled and lived together in Europe from 1867 to 1871 and again from 1875 to 1876.

Years later author Henry James referred to these women as “that strange sisterhood of American lady sculptors who at one time settled upon the seven hills [of Rome] in a white, marmorean flock,” meaning that these women preferred the fine white marble available in Rome.

A bronze sculpture Whitney named Roma (1869) represents the ancient city in the form of a hunchbacked and careworn old peasant woman, illustrating the poverty and decay of the city of Rome. But the old city still carries flashes of magnificence, shown in the hem of the woman’s dress, which is decorated with miniatures of famous Italian artworks. Understandably upset, Roman authorities banned it and she had to sneak it out of the country. It was displayed in London, Boston and Philadelphia.

Whitney returned to the United States in 1871, and in 1873 she received a commission to create a sculpture of American patriot Samuel Adams for the Capitol Building in Washington, DC. This prompted her return to Europe in 1875 so that she could supervise the cutting of the stone. The work was completed the following year, and

Whitney allowed the Samuel Adams monument to be displayed at the Boston Athenaeum before being sent to Washington, DC; Bostonians liked it so much they commissioned a bronze copy, which stands in Adams Square in front of Faneuil Hall. She spent the next 30 years sculpting portrait busts of prominent suffragists, abolitionists and historical figures. 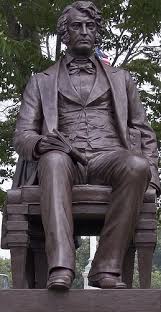 Gender Discrimination
In 1875, after working as a sculptor for nearly twenty years, Anne Whitney entered a national competition for a sculpture of abolitionist Charles Sumner. A well-known supporter of the abolitionist movement, she was thrilled when her model won the commission. However, when the judges discovered that the model had been created by a woman, they took the job from her and “publicly decreed that a woman could not accurately sculpt a man’s legs.” Outraged, she produced the statue anyway; it now stands outside Harvard Law School.

Bury your grievances. It will take more than a Boston Art Committee to quench me.

Partner in Art and Life
In 1876 Whitney established a home and four-story studio at 92 Mount Vernon Street on Beacon Hill in Boston, where she worked and lived with Addy Manning for eighteen years. Whitney’s relationship with Manning is frequently termed a Boston Marriage, a term used in New England in the decades of the late 19th and early 20th centuries to describe two women living together and supporting themselves financially. Such relationships between upper class professional women were both common and accepted by society at large.

In 1888 Anne purchased 225-acre farm in Shelburne, New Hampshire, where she and Addy spent their summers. They were both involved with the women’s suffrage movement, printing pamphlets in support of social reform, and sharing their home with suffragists and fellow artists.

Whitney met feminist Lucy Stone while raising money to help Dr. Elizabeth Blackwell establish a women’s hospital. Stone was the first Massachusetts woman to earn a college degree; and she kept her maiden name when she married, inspiring later feminists to dub themselves Lucy Stoners. In 1893, Whitney sculpted a portrait bust of Stone for the Woman’s Building at the World’s Columbian Exposition in Chicago, which is now on display at the Boston Public Library.

Addy Manning died in 1906 at the age of sixty-nine, ending a relationship that had spanned forty-four years. Anne was grief-stricken, and she never spent another summer at the farm in Shelburne. A cousin offered her the use of a cottage on his estate in Plymouth.

Anne Whitney died January 23, 1915 in her apartment in Boston after a brief Illness. Her ashes were buried beside Addy’s, under the same headstone. 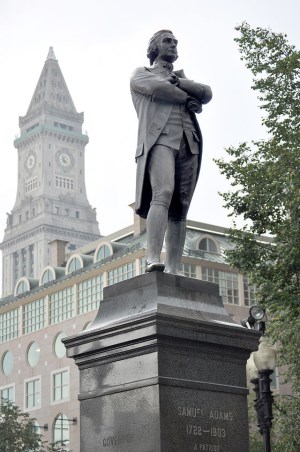 Her best public works include a marble statue of Samuel Adams (1876) located in the National Statuary Hall at the U.S. Capitol in Washington DC; the statue of Leif Ericson (1887) on Commonwealth Avenue in Boston; and another Ericson monument at Juneau Park in Milwaukee, Wisconsin.