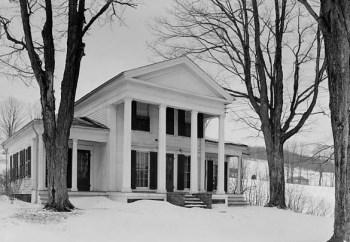 This area of New York was a key geographic area for runaway slaves, whether on their own or as a part of the UGRR. Broome County stands midway between two significant UGRR stations – that of William Still in Philadelphia and that of Gerrit Smith in Peterboro, NY. The best known UGRR conductor, Harriet Tubman frequently traveled this route.

A runaway female slave, a 16-year-old girl named Marge Cruizer, was so comfortable with the Gates family that she decided to live with them. She spent the rest of her life there and is buried in the cemetery next to the house. Marge was also the wife of Thomas Old Bay Tom Crocker, the first African American to be elected mayor of Binghamton, New York.

Anti-Slavery Work
The abolitionist movement was the first call for major social change in the United States. This collaboration of men and women, black and white, was critical to the success of the Underground Railroad. Approximately 100,000 Americans escaped from slavery in the United States in the antebellum years (1830-1860), about 40,000 of those found refuge in Canada.

Male and female anti-slavery societies called for immediate abolition, and some members became UGRR stationmasters, who provided fugitives with food, clothing, safe places to rest and medical care, if necessary. The Banner of Liberty, an anti-abolitionist newspaper in the Hudson Valley, announced in 1860:

The underground railroad is no myth. A regular organization, to which this name has been applied, stretches through every free State in the Union, and has its agents and emissaries on the borders of every slave State and along all the routes traveled by fugitive slaves. … In all the principal cities in the State of New York – in New York City, Albany, Utica, Syracuse, Rochester, Buffalo and other places – regular agents are located. …

Several heavily traveled Underground Railroad routes developed in New York. Some routes ended at Niagara Falls, while others led to cities on the Erie Canal or to Lake Ontario via the Oswego Canal. The route from New York City to the state capital at Albany was the most important. The Committee of Vigilance at Albany was considered the most efficient UGRR organization in the State. The Great State Road runs from Albany to the northern border with Quebec.

Tens of thousands of fugitive slaves traveled from South to North from station to station on the UGRR, primarily in the years between 1830 and 1865. Because aiding fugitives remained illegal even after the state of New York abolished slavery in 1827, UGRR activities were secret and details of the work were only passed down within families. 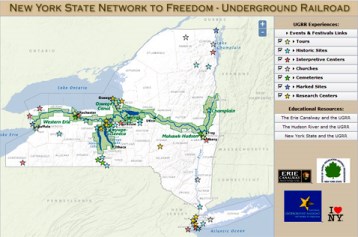 Each star on this New York Network to Freedom interactive map contains information about a certain place and a link to the website. Click on the link above to see the full map, then click on the stars. Well worth your time, believe me.

Lake Champlain lies between the Adirondack Mountains of New York and the Green Mountains of Vermont. The watershed is 150 miles long and flows north into Canada’s Richelieu River, providing easy access to Montreal. After its opening in 1823, the Champlain Canal facilitated the movement of runaways. In the 1850s, rail routes to Montreal from Vermont and New York became increasingly important.

The key UGRR stops that fed the Champlain Line were New York City, Albany and Troy. The Line’s roads, railroads and steamboats facilitated the movement of an untold number of fugitive slaves, and provided direct access to eastern and western Canada through Vermont and northeastern New York. Rouses Point’s rail and boat terminal, at the northern end of Lake Champlain, was the most important stop on the New York side of the lake.

Rescue of Charles Nalle
Charles Nalle was a slave owned by Blucher Hansborough of Culpeper, Virginia (he was also Hansborough’s half brother). Charles was married to Kitty, but she lived on a nearby plantation. When Kitty’s owner died, he left instructions in his will to free her. Virginia law required slaves to leave the state after they were freed. Kitty moved to Washington, DC, in order to remain close to Charles.

In October 1858, aided by the Underground Railroad, 28-year-old Charles Nalle managed to escape north. Authorities suspected that Kitty aided in Charles’ escape; they arrested her and placed her in the DC slave pen. She was ultimately released through the efforts of a young civil rights lawyer named Chester Alan Arthur, future president of the United States.

The best course for an escaped slave was to flee to Canada, where they could not be returned to slavery. Under the Fugitive Slave Law of 1850, runaways were not safe even in the free states; they could still be captured and returned to their masters. However, Charles lingered, still hoping to find some news about Kitty and their children. He stopped in Albany, New York, and then in Troy, where an acquaintance betrayed Nalle. A Federal Marshal and a slave catcher from Culpeper captured him April 27, 1860.

While Nalle was being held in the upper floor of a building, Harriet Tubman, who was visiting a cousin in Troy, heard about Nalle’s predicament. Disguising herself as an old woman, she managed to get to Nalle, and signaled to him to exit through the window. A large crowd of blacks and whites had gathered in the street, and they attempted to rescue Nalle, but authorities hustled him across the river to the town of Watervliet, where he was arrested again.

Tubman and the crowd of blacks and whites also crossed the river and stormed the building where Nalle was being held and liberated him a second time. Ultimately, Nalle’s saviors raised money and bought his freedom for $650. The Nalle rescue is considered the greatest event in Watervliet’s history, and an historical marker noting the event stands on Broadway in Watervliet.

The Jerry Rescue
On October 1, 1851, an abolitionist organization called the Liberty Party was holding its state convention in Syracuse, New York. That same day William Jerry Henry, a 40-year-old fugitive slave and barrel maker from Missouri, was arrested, supposedly for theft. However, after they handcuffed Jerry, federal marshals announced that he was being arrested under the Fugitive Slave Law of 1850, which allowed slaves to be returned to their masters in the South.

Jerry was brought before U.S. Commissioner Joseph Sabine for arraignment. Word of his arrest quickly reached the Liberty Party Convention, then in session at a nearby church, and the abolitionists took action. A crowd of blacks and whites gathered at Sabine’s office. Church bells began to ring by pre-arranged signal. Abolitionists helped Jerry escape, and he fled to one of the bridges over the Erie Canal, where he was recaptured.

Jerry’s trial took place later that day at the Townsend Building in Clinton Square in the second floor office of the Commissioner Sabine. A crowd of approximately twenty-five hundred people stormed the building and effected the now famous Jerry Rescue. A few shots were fired, but the sheer force of the crowd was sufficient to overpower federal officers. One deputy marshal broke his arm jumping from a window to escape the crowd.

Jerry was hidden in the city until he could be transported across Lake Ontario to freedom in Kingston, Ontario, where he remained until his death a few years later. The Jerry Rescue was celebrated as one of the great triumphs of the antislavery movement and became an integral part of the lore told by abolitionists in the region.

Syracuse authorities arrested twenty-six of Jerry’s rescuers, but U.S. Senator William Seward and others paid their bail. Several other abolitionists from the area came forward to help, including Frederick Douglass, Millard Fillmore and Matilda Joslyn Gage, women’s rights advocate and UGRR stationmaster in Fayetteville, New York. Of the twenty-six who were tried, only one was convicted.

Lewiston, New York
Historic Lewiston, New York is located seven miles north of Niagara Falls. For many African Americans escaping slavery in the 1840s and 1850s, Lewiston was the last stop on the Underground Railroad. There was a code of silence among the abolitionists of Lewiston; they never spoke to outsiders about their UGRR activities. 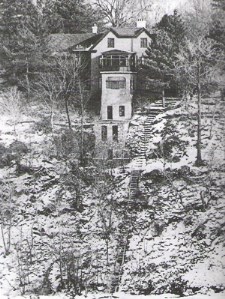 Tryon’s Folly
Every year, thousands of elementary school students read the popular book, Freedom Crossing (1969), by Margaret Goff Clark, which calls this building the House with Four Cellars. Amos Tryon, Josiah Tryon’s older brother, built the multi-level house on Lower River Road in 1830 for his wife Sally Barton Tryon, but she decided she liked their current home more, and refused to move. Therefore, it was called Tryon’s Folly.

Josiah Tryon, a volunteer stationmaster for the Underground Railroad, soon realized that the house, with its multi-level interconnecting basements and hidden rooms, would be an ideal place of shelter and rest for fugitive slaves. Tryon and other volunteers in Lewiston helped hundreds, probably thousands, of slaves on their way to Canada.

Freedom Crossing Monument
This multi-figure sculpture highlights the historical importance of the Niagara River as a gateway to freedom on the UGRR. Handing the baby to the anxious mother in the boat is Josiah Tryon, who escorted hundreds of slaves across the river in his rowboat. Tryon’s helper is talking to the father and pointing toward the river, which they will cross in the rowboat. 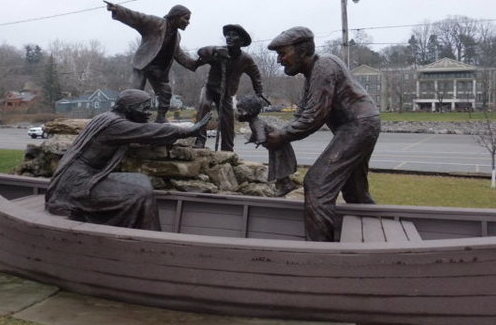 Under cover of darkness, Tryon transported the slave family across the river in his boat. After traveling hundreds of treacherous miles, avoiding slave catchers who were paid to capture them and return them to slavery in the South, this was their last ride on the Underground Railroad. When they reached the other side, they were in Canada, and they were free.