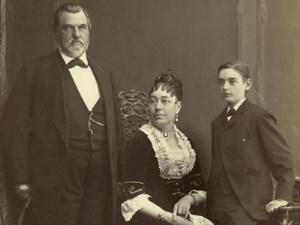 A Founder of Stanford University

Jane Lathrop Stanford, together with her husband Leland, founded Stanford University in 1891. The university was created as a memorial to their only child, Leland Stanford Jr., who died of typhoid fever at age 15. After her husband’s death in 1893, she operated the university until her death in 1905.

After a fire destroyed his his law library and other property in 1852, they then returned to Albany. Leland soon joined his five brothers in Sacramento, California, and started selling supplies to California Gold Rush miners. Jane was forced to live with her parents and care for her sick father. The separation from Leland was devastating for Jane, and her neighbors in Albany looked upon her as an abandoned wife.

Domestic Life
Jane’s father died in June 1855, prompting Leland to return to Albany. The Stanfords then moved to Sacramento, leaving in late 1855. Jane was finally happy in a modest house in California’s capitol; her sister, mother and eventually three brothers followed her there.

Leland was elected governor of California (1862-1863), and the Stanfords purchased a much larger house in Sacramento. Jane managed the move and furnished the new house. On Leland’s inauguration day, there was a flood. The new governor had to travel to his swearing-in in a rowboat, and government offices were moved to San Francisco for four months. Returning to Sacramento in June 1862, Jane put the house in order and earned a reputation as a fine hostess.

A Son Is Born
At age 39, Jane Stanford gave birth to a son May 14, 1868. Leland DeWitt Stanford, their only child, was a prominent focus in their lives. The boy later asked to be called Leland Stanford Jr. Leland Sr. was by then a well-established businessman but that was not enough for him. Over the next decade, he acquired large plots of land in northern California, where he bred horses and grew grapes.

In 1871, the Stanfords remodeled their Sacramento house, tripling it in size. Two years later, the Central Pacific Railroad moved their offices from Sacramento to San Francisco, and they built a mansion on Nob Hill in San Francisco, which was completed in 1876. That same year that Leland Sr. purchased Mayfield Grange, a total of 650 acres, south of San Francisco.

During the following ten years, he bought neighboring farms and found new methods of breeding trotters and thoroughbreds. One of these properties, Palo Alto Stock Farm, would become the site of Stanford University.

During the 1880s the Stanfords traveled extensively in Europe. Leland Jr. was only in his early teens, but he began to gather historical objects for his dream project – a museum in San Francisco. Leland Jr. fell ill with typhoid fever while the family was in Florence, Italy. After several weeks of illness, Leland Jr. died March 13, 1884, just before his sixteenth birthday.

Leland and Jane were overwhelmed with grief at the death of their only child. Because they were now public figures, newspapers published detailed accounts of their son’s death. Friends, family, and often complete strangers, bombarded the couple with letters, cards and telegrams of sympathy.

Leland Stanford Jr. University
After their return from Europe, the Stanfords began considering several ways to keep their son’s memory alive. After consulting with major educators in the Northeast, they decided to create a university in California and dedicate it to their son.

The Stanfords signed the Grant Founding and Endowing the Leland Stanford Junior University November 11, 1885. Leland worked toward the construction of buildings, while Jane focused on creating a museum to display the historical artifacts Leland Jr. had collected, as well as the Stanfords’ own art collection. 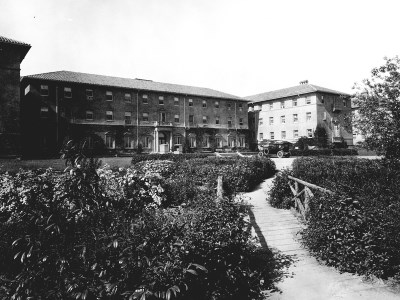 Leland Stanford Junior University opened on October 1, 1891 with 15 faculty and more than 400 students.

Leland Stanford Sr. died June 21, 1893 at his Palo Alto home at age 69. His assets were immediately frozen, halting all income to the university. As executor of the estate Jane donated her own income to keep the school from closing. Then, the federal government got nervous and demanded early payment on loans made to Leland Stanford to build the Central Pacific Railroad in the 1860s.

Determined to keep the university open, Jane traveled to London in 1897, hoping to sell her personal jewelry collection during Queen Victoria’s Diamond Jubilee, but she found no buyers. In March 1896, the United States Supreme Court rejected the government’s claims against Leland Stanford’s estate, and in December 1898 released its assets from probate.

University Administrator
With resources now available, Jane focused on building projects at the university: the Memorial Arch (1902), Memorial Church, dedicated to her husband (1903), and the Museum received new wings, making it the largest privately-owned museum in the country. New buildings were also constructed for a library, a gymnasium, and a chemistry laboratory. In 1900, she established the first student scholarship and a room in Encina Hall was designated the Leland Stanford Jr. Memorial Room.

On June 1, 1903, she was finally persuaded to turn over the reins to a board of trustees, but she remained president of the board. She also informed the board that she intended to travel for a year or two.

Jane Stanford was always involved in the minute details of running the university, corresponding with President Jordan often. When she began to question some of Jordan’s decisions, she asked a confidant on the faculty, German professor Julius Goebel, to keep an eye on him. Goebel reported back to her that Jordan’s favoritism and political patronage were interfering with faculty recruitment. Goebel subsequently wrote that she had reached the point of “final remedy … the removal of the President.”

Deadly Poison
In January 1905, at her San Francisco home, Stanford drank from a bottle of Poland Spring mineral water, which had been placed in her room by one of her staff, as it was every night. She thought the water had a bitter taste, and forced herself to vomit it up. When her maid agreed that the water tasted strange, Stanford sent it to a lab to be tested. The analysis showed that the Poland Spring water contained a fatal does of strychnine.

The maid Elizabeth Richmond fell under suspicion and was fired. A detective agency was hired to discreetly look into the incident. Its detectives put Richmond under surveillance and investigated local pharmacies for large purchases of strychnine, but found none. Unfortunately, the detectives did not discover any evidence pointing to a perpetrator or a motive for the poisoning.

Upset by the knowledge that someone had tried to kill her, Stanford embarked on an extended trip to Australia, Asia and the Middle East, planning to collect materials for the museum. She and her party left San Francisco for the island of Oahu, Hawaii February 15, 1905.

At the Moana Hotel in Honolulu on the evening of February 28 Jane asked for bicarbonate of soda to settle her stomach, which her personal secretary Bertha Berner prepared.

At 11:15 pm, Stanford cried out that she had lost control of her body, begging her staff to find a doctor quick. Stanford physician Robert W.P. Cutler, author of The Mysterious Death of Jane Stanford (2003), recounts what happened after Moana Hotel physician Dr. Francis Howard Humphris arrived at the room:

As Humphris tried to administer a solution of bromine and chloral hydrate, Mrs. Stanford, now in anguish, exclaimed, “My jaws are stiff. This is a horrible death to die.” Whereupon she was seized by a tetanic spasm that progressed relentlessly to a state of severe rigidity: her jaws clamped shut, her thighs opened widely, her feet twisted inwards, her fingers and thumbs clenched into tight fists, and her head drew back. Finally, her respiration ceased.

Consulting with several other physicians he called to the hotel, Humphris did everything he could to revive Stanford, but he could not.

Stanford University president David Starr Jordan traveled to Hawaii and escorted Jane’s body back to California. At a press conference, Jordan stated that Jane Stanford had not died of poisoning but of heart failure, and that is the story in most history books.

Funeral
Jane Stanford’s funeral was held in Memorial Church at Stanford University March 24, 1905. More than 6000 people attended the service, the crowd overflowing into the Inner Quad. Mourners then followed the casket down Palm Drive to the Stanford family mausoleum, where Jane was laid to rest between her husband and her son. Her will included numerous bequests to charities and relatives, but the university received the bulk of her estate.

Who Murdered Jane Stanford?
Forensic analysis revealed the presence of strychnine in the bicarbonate Stanford had taken, as well as traces of the poison in her tissues. A coroner’s jury was called in Hawaii to consider the evidence concerning Jane Stanford’s death. After listening to three days of testimony, they reached a verdict:

Jane Lathrop Stanford came to her death … from strychnine poisoning, said strychnine having been introduced into a bottle of bicarbonate of soda with felonious intent by some person or persons to this jury unknown.

In The Mysterious Death of Jane Stanford, Professor Robert W.P. Cutler proves that Stanford was murdered and that Stanford President David Starr Jordan covered up of her murder. In his book, Cutler shows how Jordan smeared Humphris and the other doctors present.The president even accused Humphris of adding the strychnine to the bicarbonate of soda after Stanford had died. When Humphris confronted him, Jordan denied making any such statements.

The only person present at both events was Stanford’s personal secretary Bertha Berner, who had been with Stanford for 30 years. Berner always accompanied Mrs. Stanford on her travels. In Stanford’s will, members of the household staff each received $1,000, but Berner was given $15,000, which amounts to $100,000 today. Authorities interviewed Berner and she testified at the inquiry, but she was quickly eliminated as a suspect.

New investigations confirm Stanford was poisoned by strychnine, but investigators most familiar with the case hesitate to speculate on who might have poisoned her. Someone got away with murder. 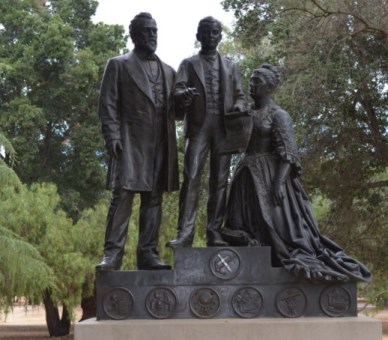