Suffragist and the First Woman Minister in the United States 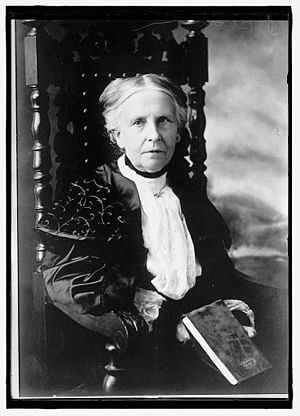 Olympia Brown was a suffragist, the first woman to graduate from a theological school, and the first woman minister in the United States.* In 1863, the Universalist Church ordained Brown, the first woman ordained by that denomination. She was also one of the first generation suffragists who survived long enough to vote after the Nineteenth Amendment was passed in 1920.

Early Years
Born January 5, 1835 in a log cabin in Prairie Ronde, Michigan, Olympia Brown was the oldest of four children born to Lephia and Asa Brown. Her parents were farmers in what was then considered the frontier – Michigan became a state the year Olympia was born. The Browns were the great-great-aunt and great-great-uncle of U.S. President Calvin Coolidge.

Education
Lephia Brown raised her children to regard religion and education as very important. The drive her mother had instilled in her inspired Olympia to finish high school and to continue her education at the college level. She was educated locally and began teaching school at 15.

Because the University of Michigan would not admit females, Olympia and her younger sister Oella studied at Mount Holyoke Female Seminary (later Mount Holyoke College) in South Hadley, Massachusetts for one year. The school’s curriculum reflected founder Mary Lyon‘s interest in science and courses included botany, natural history and astronomy. It was among the most rigorous academic institutions a young woman could attend at the time.

Olympia was discouraged by the restrictions placed on young women at Mount Holyoke, which included a list of forty rules. Students had to follow a rigorous schedule. Bells rang at 15-minute intervals, summoning the students to their next activity. Rules dictated the precise time they got up in the morning and when they went to bed at night. 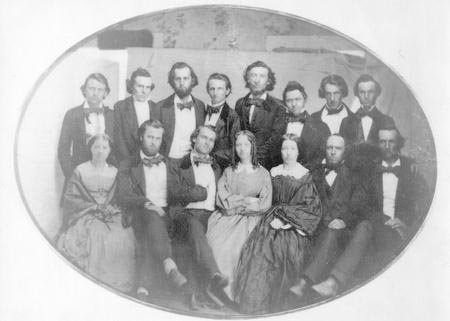 At that time, Antioch College was run by Horace Mann, a strong advocate for education reform. While an undergraduate at Antioch, Olympia Brown helped arrange for Antoinette Brown Blackwell to speak to the students. Blackwell had graduated from Oberlin College in Oberlin, Ohio, but was refused a license to preach because of her gender.

Career in Religion
After graduating from Antioch in 1860, Olympia Brown decided her calling was to become a minister. Several schools rejected her application, until the Theological School of St. Lawrence University in Canton, New York agreed to admit her as a student. However, Dr. Ebenezer Fisher, dean of the Theological School, tried to discourage her from enrolling.

While he believed that the ministry was not a proper place for women, Dr. Fisher also feared that hordes of women would want to follow in Brown’s footsteps, and would destroy his small, struggling school. Brown also faced opposition from fellow students and wives of the faculty. The men in her class worried that admitting women to the ministry would diminish their roles.

Brown took it all as a challenge. People do not become pioneers by giving up easily. While a student, she preached in nearby Ogdensburg whenever she had a break from school. A church in Heuvelton offered her a job as pastor, but she wanted to be ordained by a full denominational authority.

While the Northern Association of Universalists were in session in Malone, New York, she presented her case for ordination. On June 25, 1863, the Universalist Church of America, a Christian Universalist religious denomination, ordained Brown the first fully ordained woman minister. Dr. Ebenezer Fisher, who had opposed her at St. Lawrence, participated in the ceremony.

This was the first time that the Universalists or indeed any denomination had formally ordained any woman as a preacher. They took that stand, a remarkable one for the day, which shows the courage of these men.

In 1864, Reverend Olympia Brown accepted a position as minister with a Universalist Church in Weymouth Landing, Massachusetts. She went on to pastor churches at Marshfield and Montpelier, Vermont; Bridgeport, Connecticut; and Racine, Wisconsin.

In 1961, the Universalists and Unitarians joined to form the Unitarian Universalist Association. That organization became the first large denomination to have a majority of female ministers.

Career in Women’s Suffrage
Brown’s longtime interest in women’s suffrage intensified in the 1860s. Women’s rights leaders recognized Brown’s strong speaking skills and belief in equal rights, and sought her involvement in the movement. After a decade and a half of service as a full-time minister, Brown became a part-time minister in order to devote more time to the fight for women’s suffrage.

In the summer of 1867, at the request of Lucy Stone, Brown toured Kansas in the first state campaign to urge passage of a state women’s suffrage amendment. During that summer, she gave more than 300 speeches despite facing many hardships. Elizabeth Cady Stanton said of Brown, “She is the most promising young woman now speaking in this cause.” Although the Kansas campaign was a great experience, Brown returned to the ministry.

In May 1868, Olympia Brown proposed a women’s suffrage organization in New England that would campaign exclusively for women’s right to vote. On the advice of Abby Kelley, Brown announced a meeting in Boston to discuss her proposal. Caroline Severance chaired a planning committee, which established the New England Woman’s Suffrage Association (NEWSA) in November 1868.

By 1870 Brown was ready for another challenge and accepted the job as pastor of the Universalist Church in Bridgeport, Connecticut. Although the church had many members, Brown discovered that they were not participating in church activities. She also found that “unlike my Weymouth people, they had no such breadth of vision.”

Marriage and Family
In April, 1873, Olympia married publisher John Henry Willis. By mutual agreement she kept her maiden name. In her public life she was always known as Reverend Olympia Brown. She and her husband had two children, a son Henry Parker Willis (born 1874), and a daughter Gwendolen Brown Willis, (born 1876). Her husband died in 1893 and Olympia managed the publishing business until the turn of the century.

In April 1873, Olympia married publisher John Henry Willis, and they agreed that she would keep her maiden name. She was always known as Reverend Olympia Brown in public. She gave birth to two children: Henry Parker Willis (born 1874) and Gwendolen Brown Willis (born 1876).

Pastor and Suffragist
In 1878, Brown discovered that a Universalist church in Racine, Wisconsin was in need of a preacher, and volunteered her services. She received word that the parish was in poor condition. Of her career as a parish minister she writes:

Those who may read this will think it strange that I could only find a field in run-down or comatose churches, but they must remember that the pulpits of all the prosperous churches were already occupied by men, and were looked forward to as the goal of all the young men coming into the ministry with whom I, at first the only woman preacher in the denomination, had to compete. All I could do was to take some place that had been abandoned by others and make something of it, and this I was only too glad to do.

Her husband, John Willis, closed his business in Bridgeport and went ahead to Racine to find a job and a home for his family. He bought a share of The Racine Times-Call newspaper and actively supported his wife’s ministry.

Brown’s suffrage work took on new life in Racine, and she was elected to the presidency of the National Woman Suffrage Association in Wisconsin. In 1886, Brown met Susan B. Anthony and joined the American Equal Rights Association, which was created to advance the rights of women, as well as African Americans.

Having served as pastor of the Church of the Good Shepherd in Racine since 1878, Reverend Olympia Brown reached a turning point in her life in 1887. She said at the time, “As the years passed by it became more and more clear that I must give myself to the suffrage work.” She resigned her pastorate and began to concentrate on her work for women’s suffrage.

Olympia Brown remained an active member of the Church of the Good Shepherd congregation after her resignation, and she often spoke from the pulpit, as did Julia Ward Howe, Mary Livermore, May Wright Sewall, and others.

When her husband died unexpectedly in 1893, she wrote:

Endless sorrow has fallen upon my heart. He was one of the truest and best men that ever lived, firm in his religious convictions, loyal to every right principle, strictly honest and upright in his life… with an absolute sincerity of character such as I have never seen in any other person.”

She managed his publishing business until the turn of the century, in the face of community opposition and unscrupulous former partners.

Brown spoke before state legislatures, conventions and public gatherings, led the Wisconsin Suffrage Association, and served as president of the Federal Suffrage Association from 1903 to 1920. She became discouraged by the lack of success in the time-consuming state constitutional amendment campaigns. Only six states had passed suffrage amendments. Women had waited for more than 50 years, and their goal still seemed far away.

Suffrage Amendment
In 1913, Brown was invited to join the the militant suffrage movement led by Lucy Burns and Alice Paul called the National Woman’s Party. They were using a more radical approach by presenting a women’s right to vote amendment to the U.S. Congress and marching in front of the White House. 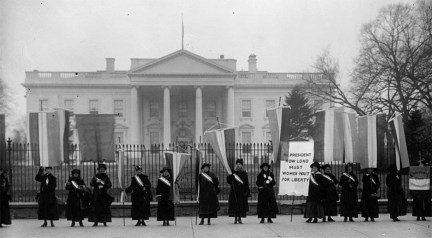 On March 14, 1917, Reverend Brown was one of 1,000 women who picketed in front of the White House in freezing rain and strong winds to demand a constitutional amendment. Some women chained themselves to the fence in front of the White House and stood strong when the police came to break up the march. Some were arrested and jailed. The resulting publicity forced President Woodrow Wilson to call for the passage of the Suffrage Amendment.

The Nineteenth Amendment to the U.S. Constitution prohibits any United States citizen from being denied the right to vote on the basis of sex. Congress passed the bill on June 4, 1919. However, with ratification still needed by the states, Brown and others hit the campaign trail one last time.

In June 1920, Olympia Brown marched in her last demonstration at the Republican Convention in Chicago at age 85. The Nineteenth Amendment was ratified by the states on August 25, 1920, just in time for Brown to vote in the 1920 presidential election, in which Warren G. Harding was elected President of the United States. Her dream was finally realized.

Late Years
Brown spent her last years with her daughter in Baltimore. The two women toured Europe in 1926, visiting France, Italy, and Switzerland. After returning to the United States, her health began to fail.

Olympia Brown died in Baltimore October 23, 1926 at age 91. She is buried in Racine, Wisconsin.

Olympia Brown earned a place in history along with other first generation suffragists, including Susan B. Anthony, Lucy Stone, Elizabeth Cady Stanton, and Matilda Joslyn Gage. Of these pioneers, Brown was the only one to live long enough to witness passage and ratification of the Nineteenth Amendment.

Honors
The Church of the Good Shepherd in Racine, Wisconsin was renamed the Olympia Brown Unitarian Universalist Church in 1899. In 1963 to honor the centennial of Brown’s ordination, the Theological School of St. Lawrence University mounted a plaque at the church she pastored at in Racine, Wisconsin. In 1999 she was inducted into the Michigan Women’s Hall of Fame.