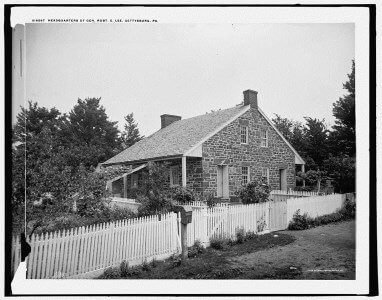 Image: Thompson House before the Battle of Gettysburg

This one and a half story stone house sits on Seminary Ridge, west of the town of Gettysburg, on the north side of the Chambersburg Pike. On July 1, 1863 General Robert E. Lee established his headquarters here. It was an ideal location, at the center and rear of the Confederate battle lines.

Anna Mary Long was born on November 12, 1793 near Littlestown, Pennsylvania. Her first husband was named Daniel Sell, with whom she had three daughters. Sell died at the age of 30 in 1822. Four years later she married Joshua Thompson, with whom she would have two sons and three daughters. Joshua Thompson became a drunkard and disappeared sometime after 1841, and was later presumed dead.

Mary had the good fortune to be friends with Gettysburg Congressman Thaddeus Stevens, an abolitionist and a force behind the passage of the 13th Amendment ending slavery. After the disappearance of Mary’s husband, she took the money she had inherited from her father to Stevens and asked him to purchase the stone house in trust for her. Although Stevens name was on the deed, Mary owned the home. She moved into the property with her eight children by 1846, and lived there for the rest of her life.

For a number of years thereafter, Mary cooked and washed laundry at the Lutheran Theological Seminary a short distance away. She appears in the June 1860 census as living at the old stone house in Cumberland Township by herself. Her children had all moved away. In July 1863 she was 69 years old. She was known by the residents of Gettysburg simply as the Widow Thompson.

The house General Robert E. Lee’s staff chose as his headquarters at Gettysburg was a one-and-a-half story stone house, situated on a 4-acre tract on the crest of Seminary Ridge, west of town on the north side of the Chambersburg Pike (now 401 Buford Avenue). They chose this house not only because of its close proximity to the center of the Confederate line, but also because the house’s thick walls would afford the general some protection from artillery shells.

After Lee’s soldiers took the door off the house to use as a map table outside, Mary and her daughter had been hiding in the cellar, due to the possibility of cannon balls and bullets entering through the door and windows. In fact, Mary had delivered her grandson in the cellar night before. Obviously Mary was a woman of many talents.

Fighting Around the Thompson House
Some of the heaviest fighting on the first day of the Battle of Gettysburg took place around Mary’s house. On the afternoon of July 1, 1863, Federal soldiers who had retreated from McPherson’s Ridge fell back to a new position on Seminary Ridge, and the new Union line crossed the Thompson property. Union artillery under Lt. James Stewart was placed in front of the house. A private recalled that their regiment formed by the fence “at the old stone house.”

Operating from the yard of the Thompson house, this Union battery expended 57 rounds of deadly canister within a few short minutes, but the Confederates were closing in fast. In the midst of their retreat, many soldiers ran down an old railroad cut near the Thompson House, but when their escape route was cut discovered, approximately 2000 Federal soldiers were taken prisoner, the largest capture of Federal soldiers at Gettysburg.

When General Lee arrived at Seminary Ridge on the evening of July 1, his army had already routed the Union forces, and he immediately established his headquarters at the Thompson House. Four guards were placed around the house, and Lee’s staff members and officers made their camps nearby.

Lee’s headquarters tents were set up in an apple orchard across the road, where the commanding general put together his battle plans for the following day with General James Longstreet, and sent a courier to General Richard Ewell with a message not to attack the Union army’s right until he could hear the sound of Longstreet’s artillery to the south.

Mary cooked for the soldiers, baked pies that they took out of the oven before they were done. She was impressed by Lee, saying that he was a gentleman who sat in a chair near the window reading his Bible, but she complained bitterly of the “robbery and general destruction of her goods by some of his attendants.” Throughout the battle, Lee and other Confederate officers used Mary’s property as a meeting place. Lee slept in a tent near his staff, as he always did, but took his meals in the house.

In the aftermath of the first day’s fighting, dead and wounded men littered the fields around Seminary Ridge. Due to the Thompson House’s close proximity to the heaviest fighting of the day, wounded men from both sides were taken to Mary’s house. Mary remained at home throughout the battle and cared for the wounded men, using her clothing and bedding as dressing for the wounded and wrapping the dead in carpets.

Due to the intensity of the battle on July 2 and 3, Lee spent little time at his official headquarters, but the tents of his staff remained there and all incoming messages for General Lee were sent to the Thompson House. Confederate artillerymen found the ridges near Lee’s headquarters to be excellent artillery positions.

Early on July 2, two Confederate batteries were placed along Seminary Ridge near Mary’s house. These guns opened fire on Union batteries at 4 o’clock and continued the bombardment until dark. On July 3, the area was once again a center of activitiy as Watson and Smith’s batteries were taken from their positions and moved south down Hagerstown Road to support the grand Confederate charge that afternoon. 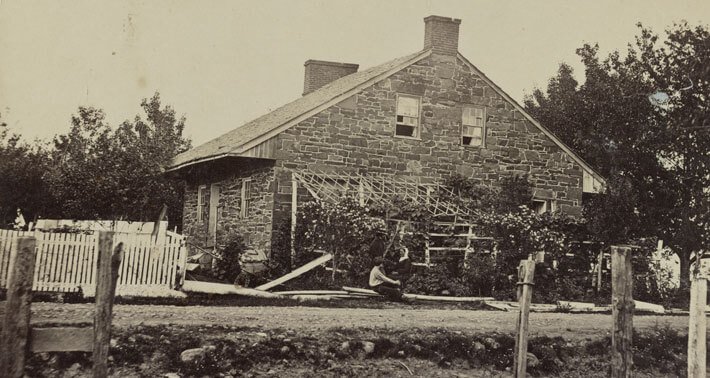 Image: Thompson House after the Battle of Gettysburg
There are two figures in in the center foreground in front of the arbor – a man sitting and a woman standing. This woman may be Mary Thompson; she is dressed in dark clothing and a white head scarf – just like the woman in the image a few paragraphs above. The man she is conversing with might be one of Matthew Brady’s photographers who were in Gettysburg taking photographs two weeks after the battle. This image shows the damage to the yard.

Aftermath
In the weeks following the Battle of Gettysburg, thousands of visitors poured into the town, many eager to see the small house where General Lee had made his headquarters. Mary may have been uncomfortable with her newfound prominence; she left Gettysburg for a short period after the battle but she soon returned, and lived in the house until her death in 1873.

Pennsylvania College (Gettysburg College) Professor Michael Jacobs interviewed Mary Thompson after the battle. He reported that the house was a duplex, and that since by 1863 all of Mary’s children had moved out, the other half of the house was empty. This would have likely made it attractive for Lee as a location for his headquarters.

The Thompson house was converted into General Lee’s Headquarters Museum in 1921, and remains privately owned. As of June 2014, the house is adjacent to a restaurant and a hotel, which rents out the upper floor of the Thompson House to hotel guests as the General Lee Suite.

Restoration
In July 2014, the Civil War Trust announced that it has launched a $5.5 million national campaign to acquire the Mary Thompson House and its four acres. Jim Lighthizer, the organization’s president, said at least $2.5 million has already been raised through donations. The trust will also apply for a Civil War Land Acquisition Grant, worth as much as $1.5 million, from the National Park Service’s American Battlefield Protection Program.

The Civil War Trust will spend $400,000 to $500,000 to demolish the modern structures on the property, and restore the historic building to the way it appeared 151 years ago. A Washington-based nonprofit group, the Civil War Trust has already preserved 40,000 acres of land and historical structures in 20 states. Lighthizer stated:

Lee’s headquarters is one of the most important unprotected historic structures in America… This spot is where some of most important decisions were made by an American general in the Civil War… As far as preserving a historically significant structure and part of the battlefield, this is the biggest deal we’ve ever done…

There is no timetable for the restoration project or reopening the house after demolition of the Quality Inn motel and the restaurant on the property, but once finished, the whole parcel will be donated to the National Park Service for inclusion in the Gettysburg National Military Park.

The Park Service has also uncovered Civil War-era farm lanes and stone walls, replanted orchards, and rebuilt fences as part of a comprehensive, multimillion-dollar project to rehabilitate features within the park boundaries.