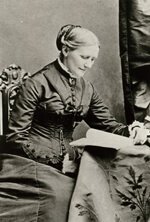 As the first woman appointed to the Board of Supervisors of the Boston Public School System (1876), Lucretia Crocker pioneered the method of teaching mathematics and the natural sciences during her decade-long tenure. Earlier, she was among the first women elected to the Boston School Committee, and a strong advocate for higher education for women.

Early Years
Lucretia Crocker was born December 31, 1829 in Barnstable, Massachusetts on Cape Cod to Henry and Lydia Ferris Crocker. She was educated in the Boston Public Schools, and attended the State Normal School in West Newton, Massachusetts. Established by Horace Mann, it was the first state-supported school dedicated to training teachers in America. She graduated in 1850, but remained there as an instructor in geography, mathematics and natural science until ill health forced her to resign in 1854.

Boston School Committee
When the opportunity came for women to serve on the School Committee in Boston, Miss Crocker was viewed as a desirable member of the board, and she was elected in 1874 to represent Ward 11.
Lucretia Crocker was also the author of a standard, nationally-used text on the teaching of geography. Her efforts throughout her career centered on the improvement of science education.

Board of Supervisors
In 1876 the committee elected Crocker to the newly created and powerful six-member Board of Supervisors. During her 10 years on the board she directed her efforts in particular toward the improvement of science education in the Boston public schools. She worked to secure equipment, materials, and books of the highest quality for the schools and to improve the quality of teaching.

As a member of the Board of Supervisors, she upgraded science and laboratory equipment, reference books, curriculum and the training of science teachers. It was the first instance of a public office of such trust and honor with a handsome salary being given to a woman.

Fragile Health
No one could have been better fitted to discharge its duties than she was, except in the one respect of physical strength. She had long suffered from some delicacy of the throat or lungs; and, while seldom really ill, she did not give the impression of a robust frame equal to the demands which her active intellect, zealous energy, and conscientious work made upon it. But, if she suffered, her colleagues did not know it.

Antioch College
In 1857 Lucretia Crocker left Massachusetts for Yellow Springs, Ohio, where she had accepted a teaching position at Antioch College whose first president, Horace Mann, had not only pioneered normal schools in Massachusetts but was expanding his vision nationally. Mann is considered the Father of American Education. His wife, Mary Peabody Mann, sister of editor and publisher Elizabeth Peabody, was herself a teacher and a strong supporter of her husband.

At Antioch, Crocker was professor of mathematics and astronomy until she returned to Boston in 1859 to care for her parents and to teach botany and mathematics at the Newbury Street School in Boston’s Back Bay.

As an educator, Lucretia Crocker was deeply engaged in nature study, a popular movement of the nineteenth century that emphasized first-hand knowledge of nature and its beauty, not simply an analytical understanding of the natural world. One of the movement’s proponents, the great Harvard University naturalist Louis Agassiz, coined the phrase, study nature, not books.

Crocker oversaw sweeping improvements in how science was taught in Boston, and supported the Boston Natural History Society’s Teachers’ School of Science (1870), which was designed to improve methods of teaching science. When funds for the Teachers’ School lagged, Lucretia recruited her friend, philanthropist Pauline Agassiz Shaw, to help. The Commonwealth of Massachusetts still supports Teaching Fellows in science education through the Lucretia Crocker Foundation.

According to historian Harriet F. Bergmann:

It was a groundbreaking scheme, designed to draw on the intellectual attainments of Ticknor’s leisured, wealthy friends to further the education of women throughout the country. The means were simple: an enlightened, modern curriculum; a lending library; and a warm correspondence between woman teacher and woman learner. Ticknor and her friends wanted to give away what men had long refused to allow women to buy: a liberal education.

Among the students of the society were Mary Parker Follett and Charlotte Perkins Gilman. The Society maintained several thousand volumes in a lending library which was paid for by the small fees charged to students. Instructors offered their time and services free.

The Society provided individually planned courses and constant communications between instructors and students, “a network of women teaching women by mail.” Over the 24 years of its existence it served 7,086 students and had over 200 correspondent teachers. The society was voluntarily dissolved after the death of Anna Ticknor in 1897.

In the Interest of Society
Crocker’s other activities included selecting books for the Sunday school library of the American Unitarian Association. As a member of the committee on teachers for the New England Freedmen’s Aid Society, she traveled South in 1869 to tour freedmen’s schools. She served on the executive committee of the Boston School for Deaf Mutes, which helped train teachers to work with the deaf.

She founded the Women’s Education Association (WEA) in 1872 to support women in the sciences. WEA’s first laboratory opened in Gloucester, Massachusetts. Later, in conjunction with the Boston Society of Natural History, they relocated the lab to Woods Hole, Massachusetts, where cutting edge scientific and environmental work continues today.

For the rest of her career as a teacher or administrator, she focused her attention on improving science teaching and bringing scientific knowledge to the general public. Her dedication to science education led to her election to the American Association for the Advancement of Science in 1880.

With Ellen Swallow Richards, the first woman to graduate from the Massachusetts Institute of Technology (MIT), Crocker developed a new course for the Boston Public Schools in mineralogy. Richards joined Crocker in giving a series of First Lessons on Minerals for the use of the public schools. For two years (1881-82) they gave the lessons, some one hundred and twenty-five in all, in twelve schools. Richards later recalled:

Miss Crocker was not only critical and suggestive in our discussion of the lesson, but, while she wrote on the board the children’s answers to my questions, she supplemented and modified my work in a marked degree, thus bringing into the course all the experience which she had gained. It was this practical quality in the instruction which made the lessons so successful as models of elementary scientific teaching. Nevertheless, she refused all credit for the work done.

Lucretia Crocker published two books during her lifetime: Our World (1864), a geography text she co-authored with Mary L. Hall, and Methods of Teaching Geography: Notes on Lessons (1883). In 1886, Crocker Hall at the State Normal School, from which she graduated in 1850, was named in her honor. In the midst of all these activities the end came quickly and suddenly. Her illness of a few days was hardly known to her friends when the terrible announcement came that she had passed.

Lucretia Crocker died October 9, 1886 in Boston, Massachusetts at age 55. A simple funeral service was held at her home, and a public service was held in the Church of the Disciples, which she had attended.

In a posthumous tribute to her presented before the Boston Society of Natural History (to which Crocker was elected in 1876), Harvard Professor Alpheus Hyatt noted:

Miss Lucretia Crocker, in the course of a few brief years of public life, won her way to the respectful consideration of every [one] with whom she came in contact, on account of the purely impersonal and professional soundness of her mind and judgment… She was also deeply interested in the progress of the Museum [Boston Museum of Natural History] and had fully entered into and sympathized with its plan of work. Her power and influence were very large. She had gained the confidence of many persons and was well known to the public… one thing has seemed very evident, even to me, that it was certainly largely, if not almost wholly, due to her, that natural history has assumed so prominent a place in the [Boston public schools] curriculum.”

In 1880, Lucretia Crocker was elected to the American Association for the Advancement of Science, a remarkable achievement for a woman, and for someone who was not herself a scientist. After her death, Industrial and environmental chemist Ellen Swallow Richards said of her:

Miss Crocker, while not a specialist, had the rare quality of mind which permitted a wide acquaintance with various branches of elementary sciences and a judicial balancing of the claims of each. It was this faculty which made her so well qualified to suggest to specialists appropriate ways of teaching science from the educational standpoint and not from the technical or professional one…