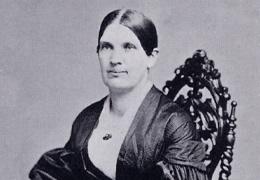 An Organizer of the Seneca Falls Convention

Jane and Richard Hunt of Waterloo, New York were philanthropists who supported human rights causes. They hosted the tea party that led to the first women’s rights convention at Seneca Falls, New York in July 1848.

Jane Clothier Master was born June 26, 1812 in Philadelphia, Pennsylvania to Quakers William and Mary Master. At age thirty-three Jane Master married Richard Hunt in November 1845 and moved to Waterloo, New York, where she became a member of Richard’s extended family of Hunts, McClintocks, Mounts, Plants and Pryors. All of these families were Quakers who had migrated to Waterloo from Philadelphia or New York State.

On October 6, 1846, Jane bore her own first child, a son named William Master Hunt. Less than a month before the Seneca Falls convention, on June 23, 1848, she gave birth to a daughter they named Jane, but they called her Jenny. Jane’s third child, George Truman Hunt was born on April 18, 1852. The Hunts named him after Jane’s brother in law, George Truman, a Quaker minister and physician living in Philadelphia. A fourth child, Anna, died at birth in March of 1854.

Jane’s marriage to Richard Hunt made her the wife of one of the richest men in Seneca County, and their home at 6 Main Street on the Seneca Turnpike, just east of the village of Waterloo, reflected their prosperity. The house was an eleven-room brick Federal-style mansion, in which they lived in considerable comfort.

The Hunts’ nuclear families in Waterloo included the McClintocks, Mounts, Plants and Pryors. The McClintocks came to Waterloo from a Quaker community in Philadelphia, and rented property from Richard Hunt. The Hunts and the McClintocks opposed slavery; both participated in the free produce movement, a boycott against goods produced by slave labor. It came about as a method to fight slavery by having consumers buy only produce grown by free men and women who were paid for their work. The Hunt and McClintock houses also served as stations on the Underground Railroad.

Traditional Quaker tenets held that men and women should meet separately when making religious decisions. By the 1840s, Hicksite Quakers decided to bring women and men together in the faith as an expression of their spiritual equality. In June 1848, approximately 200 Hicksites, including the Hunts and the McClintocks, formed an even more radical Quaker group, known as the Yearly Meeting of Congregational Friends, or Progressive Friends. The Progressive Friends intended to further elevate the influence of women in affairs of the faith. They introduced joint meetings of men and women, giving women an equal voice.

The Tea Party
After Quaker service on Sunday July 9, 1848, several women decided to invite Lucretia Mott, a well-known Quaker minister and social reformer from Philadelphia, to visit Waterloo. Mott was famous for her oratorical ability, which was rare during an era which women were often not allowed to speak in public. Jane Hunt, who had given birth two weeks earlier and was tending the baby at home, offered her house for the meeting.

Mott arrived at the Hunt house with her sister, Martha Wright from Auburn, New York. Mary Ann McClintock of Waterloo was also there. The only non-Quaker was Elizabeth Cady Stanton, from nearby Seneca Falls. As the women drank their tea, Stanton, the only non-Quaker present, vented a lifetime’s worth of pent-up frustration, about women’s subservient place in society.

Stanton had first met Lucretia Mott at the World Anti-Slavery Convention in London in 1840, when Stanton was on her honeymoon. When the London meeting refused to admit women delegates from the United States, the two women had agreed to hold a meeting to discuss the rights of women when they returned home, but real life intervened, and they never did. Seeing Mott again after eight years apart inspired Stanton once more, and she “poured out her long-standing discontent.”

They discussed the misfortunes imposed upon females – they could not vote or own property, and there were few social or intellectual opportunities. These women decided they wanted change. Without that gathering of Quaker women who were experienced in the strategy and tactics of the abolition movement, energized by Stanton, there would have been no Seneca Falls convention.

The five women decided to hold a women’s rights convention in the immediate future for protest and discussion, before Mott returned home to Philadelphia. Around the Hunts’ tea table, they drafted a brief notice that began with these words:

WOMAN’S RIGHTS CONVENTION.—A Convention to discuss the social, civic and religious condition and rights of Woman will be held in the Wesleyan Methodist Chapel at Seneca Falls, N. Y., on Wednesday and Thursday, the 19th and 20th of July…

The notice was delivered to the offices of the Seneca County Courier in Seneca Falls, where it first appeared on Tuesday, July 11, giving readers only eight days’ notice until the convention. Built by a congregation of abolitionists and financed in part by Richard Hunt, the Wesleyan Chapel had been the scene of many reform lectures, and was considered the only large building in the area that would open its doors to a women’s rights convention.

First Women’s Rights Convention
On July 19, 1848, people crowded into the Wesleyan Chapel in Seneca Falls for the two-day historic event that catapulted the women’s rights movement into a national battle for equality. Although the convention was for women, men were not turned away. Therefore, forty-two men became part of the 300-member assembly. James Mott, women’s rights advocate and husband of Lucretia Mott, chaired the event. Both Jane and Richard Hunt attended the Convention.

The Seneca Falls Convention advertised itself as “a convention to discuss the social, civil, and religious condition and rights of women.” For the occasion, Elizabeth Cady Stanton wrote a Declaration of Sentiments, which she modeled on the Declaration of Independence, to formally assert the equality of men and women and propose resolutions, including female suffrage.

When, in the course of human events, it becomes necessary for one portion of the family of man to assume among the people of the earth a position different from that which they have hitherto occupied, but one to which the laws of nature and of nature’s God entitle them, a decent respect to the opinions of mankind requires that they should declare the causes that impel them to such a course…

We hold these truths to be self-evident: that all men and women are created equal; that they are endowed by their Creator with certain inalienable rights; that among these are life, liberty, and the pursuit of happiness… Whenever any form of Government becomes destructive of these ends, it is the right of those who suffer from it to refuse allegiance to it, and to insist upon the institution of a new government, laying its foundation on such principles, and organizing its powers in such form as to them shall seem most likely to effect their safety and happiness…

Stanton also read an accompanying list of resolutions, to be debated and modified before being presented for signatures. A heated debate sprang up regarding women’s right to vote, with many including Mott urging the removal of this concept, but African American abolitionist Frederick Douglass argued eloquently as to why it should be included, and the suffrage resolution was retained.

On the second day, July 20, abolitionist Frederick Douglass made a powerful speech that unified the two causes of abolishing slavery and women’s rights. It was also the day that the convention voted on the Declaration of Sentiments. After 68 women and 32 men signed the document making it legitimate, the women’s rights movement officially began.

The Declaration of Sentiments formed the basis of discussion at the Convention, and its amended form, signed by exactly 100 participants, was the first published call to establish women’s legal and social equality with men. The Declaration was, of course, signed by Jane and Richard Hunt, and at least one person from Hunts’ nuclear families signed it as well, including four McClintocks, Lydia Mount and her daughter Mary E. Vail, Hannah Plant, and George and Margaret Pryor.

In 1854 Elizabeth Cady Stanton lobbied the New York State Legislature to amend the existing Married Women’s Property Law, which would grant women the right to conduct business, manage their own finances, sue and be sued, and be joint guardians of their children. After six failed attempts she finally prevailed in 1860, bringing the women of New York a giant leap forward in accomplishing equal rights.

Richard Hunt died November 7, 1856, leaving Jane a wealthy widow with six children under the age of nineteen, but she remained active in community affairs and gave generously to the town of Waterloo.

Jane Hunt continued the family’s tradition of philanthropy. She gave to St. Paul’s Episcopal Church the land for St. John’s Chapel on Chapel Street in Waterloo. She lived in the family home until her death.

Jane Hunt died November 28, 1889, at age 77, while visiting her daughter in Chicago. Richard and Jane are buried together in Maple Grove Cemetery in Waterloo.