Confederate Nurse and Smuggler from Maryland 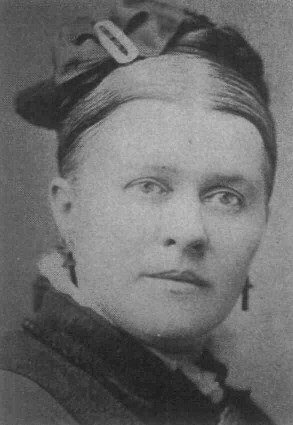 Euphemia Goldsborough exemplifies the Southern woman committed to the Confederacy. Against all odds and at great risk to her own personal safety, she smuggled necessities into Southern hospitals and Northern prisons. Her story is one of courage, compassion and endurance.

Early Years
Euphemia Goldsborough was born June 5, 1836 at Boston, the family farm on Dividing Creek in Talbot County, Maryland. Euphemia was one of eight children born to Martin and Ann Hayward Goldsborough. She studied at a girls’ boarding school in Tallahassee, Florida during the 1850s, and then joined her family at their new home in Baltimore, Maryland.

Leading up to the Civil War, Marylanders had mixed feelings about secession and the Confederacy. Less than thirteen percent of Maryland’s population were slaves, and a similar number were free blacks. Although her family did not own slaves, and her records show no clear position on slavery, Goldsborough and her family sided with the South.

As tensions continued to rise between Union and Confederate supporters, 20,000 Maryland men enlisted in the Confederate army, including many of Goldsborough’s friends, but her father and brother remained in Maryland. Her family aided the Confederacy by offering their home as a refuge for Confederate soldiers traveling North and as a stop for blockade runners to pick up and drop off illegal goods like mail and supplies to be sent through the Union lines.

Nursing at Antietam
When the War began, Euphemia Goldsborough was 25 years old and had become a devoted southern sympathizer. In September 1862, word reached Baltimore about the need for medical help at the Battle of Antietam near Sharpsburg, Maryland. Goldborough left the safety of her home for Frederick, Maryland, to nurse the wounded Confederate soldiers who had been taken there. Women who chose to become nurses were judged harshly by society, and they exposed themselves to diseases, injury from battle and sexual harassment.

At that time all medical positions, including nurses, were considered male occupations, but with so many injured and dying soldiers in makeshift hospitals greatly in need of care, social objections to female nurses were soon overcome. Goldsborough wrote extensively of her experiences in a diary. She also kept what she called a hospital book, which included signatures and messages written by patients under her care.

Eight Weeks at Gettysburg
In July 1863, news traveled to Baltimore about a very bloody battle in Gettysburg, Pennsylvania. By the time Goldsborough reached that town, General Robert E. Lee, commander of Confederate forces, had fled the area, leaving 5,500 wounded behind with little medical support.

Union troops, with almost 15,000 wounded of its own, had inadequate means to care for the southern soldiers. To make matters worse, Union commander General George Meade left the area to pursue the retreating Confederates, taking substantial medical supplies and personnel with him. This left the Union wounded with only 106 surgeons and 30 ambulances.

Prisoners of war also made up a significant percentage of Gettysburg’s total casualties. Of the estimated 51,000 casualties suffered during the three-day battle, approximately 17,500 were POWs. Of this number 5,365 were Union and 12,200 (6,800 wounded and 5,400 not wounded) were Confederates.

Goldsborough traveled to Gettysburg and was assigned to care for wounded soldiers at a makeshift hospital at Pennsylvania College, now called Gettysburg College. Tasks assigned to her and other nurses included preparing food and dressings, administering to the wounded and reading the burial service over those who passed away.

There was a serious lack of clothing for the wounded Confederates, and the federal government would not allow them to have shoes or boots, supposedly to prevent them from escaping. Goldsborough smuggled boots into the hospital at Pennsylvania College, hanging by their shoelaces from the hoops of her skirt. She was certain that the boots would bump against something and reveal her scheme, but she returned to the hospital safely.

One of the soldiers Goldsborough cared for at the College hospital was Lt. A.J. Peeler of the 5th Florida Brigade, which was part of General R.H. Anderson’s Division of General A.P. Hill‘s Third Corp. The Florida Brigade had arrived late afternoon of the first day and went into position on Herr’s Ridge.

In the early morning of July 2, Anderson’s Division was ordered to Seminary Ridge and was positioned on the edge of Spangler Woods. Late in the afternoon the Floridians led General Lee’s assault on the Union line on Cemetery Ridge. A fellow soldier describes the actions of Lt. Peeler of the 5th Florida:

A braver man than Lieut. Peeler never breathed. He dashed up and down the line, hurrahing, and encouraging the men on, and keeping the line dressed on Wilcox. He was wounded by a grape-shot and stunning him awhile, but after recovering, he advanced cheering on the men, and setting them an example worthy of imitation… until he was again shot down by a minie ball, wounding him seriously in the head, he was carried to the rear where he fell into the hands of the enemy.

After Lt. Peeler’s capture by Union soldiers, he was confined to College Hospital and later Camp Letterman Hospital while he recovered from his wounds. A.J. Peeler wrote the following in Euphemia Goldsborough’s journal, which she called a hospital book:

Miss Goldsborough,
In placing my autograph in your book, I cannot allow the opportunity to pass of at the same time expressing for myself and my wounded and sick comrades the heart-felt gratitude we feel for your kindness to us here and at the College Hospital. Prisoners and strangers in a strange land, many whose fevered brows you bathed and to whose wants you have ministered with such indefatigable attention will long treasure in their hearts and memory your name and kind deeds with a feeling of sacred friendship.

I hope the fortunes of war may never be such as to throw us together under similar circumstances again but if such should be the case I can only hope that I may meet with one like yourself whose social attractions as a lady and cheering words and kindly sympathy has contributed so much to beguile the many weary hours of my almost unendurable situation. For I assure you our “College days” are the green spot of the days of my captivity.

The greatest sacrifice you have made was to have humbled your proud spirit to meeting as social equals and treating with respect those whose conduct in the war have shown them to be enemies of “Woman”, oppressors of woman, and destitute of manliness and true honor. May the day soon come when this unhappy war shall close with triumph to our arms and cause and when your friends, the “Florida Boys” shall have the pleasure of greeting you in the sunny south, the “land of flowers” where by every means in their power they will be happy to show by acts what they feel at heart – their appreciation of your kind attention.

After the opening of the improved medical facility at Gettysburg named Camp Letterman, Goldsborough could have gone home, but she chose to stay in Gettysburg and work at the new hospital. There she was assigned to 100 men, split evenly with 50 Confederate and 50 Union soldiers, whom she treated as equals. She worked tirelessly, laboring day and night, only stopping when sleep was absolutely necessary. 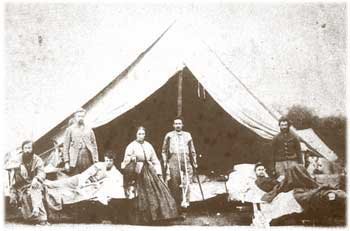 Image: Nurse and her patients
Camp Letterman at Gettysburg

Goldsborough’s work there culminated with the treatment of her favorite patient, Sam Watson of the 5th Confederate Regiment out of Texas whose right arm had been amputated. She described Watson as, “One of the most attractive boys I ever saw.” Watson’s condition seemed dire at first, but he improved, almost teasing her with a chance of recovering. Unfortunately, Watson succumbed to his injury and died September 13, 1863.

After countless hours spent caring for Watson and his subsequent death, Goldsborough was exhausted, and she returned Baltimore. At home, she wrote Watson’s parents a condolence letter, expressing the significant impact Watson had on her life. Her sister described her as “never the same joyous girl again.”

Along with painful memories, however, came endless gifts and words of gratitude from her patients. Her hospital books were filled with the signatures of patients she had treated, and soldiers often wrote messages and poems of gratitude next to their signatures. One soldier even carved her a beautiful wooden ring.

Goldsborough and her family continued their work with what was known as the Confederate Underground, by smuggling mail, clothing, medical supplies and food into the South and into Confederate prisons in the Baltimore area. Of everything she smuggled, mail was the most precious, especially for men in the Confederate army from Maryland, a Union state. They were completely isolated.

Arrest and Imprisonment
Goldsborough also helped prisoners of war escape and return to the South. Baltimore was under strict Union control, and officials soon became suspicious of Goldsborough’s activities and intercepted a letter that included her name and address. This led to her arrest by Union soldiers on the charge of aiding the escape of a Confederate prisoner in the middle of the night of November 23, 1863.

Euphemia Goldsborough, who claimed her crimes were “feeding the hungry and clothing the naked,” was found guilty of treason and was sentenced to banishment from the Union for the remainder of the war. If she returned North before the war was over, she would be considered a spy and shot on sight.

Under heavy guard, she was only allowed to carry two trunks and $225 in Federal money, and she was strip searched before her journey South, writing in her diary:

…before starting was stripped of all my clothing, minutely examined by two Yankee women, open doors with all around Yankee soldiers laughing and jesting at my expense. If I live for half a century I can never forget the humiliation…

Even under these dangerous conditions, she smuggled some dispatches with her to Richmond through a secret compartment in the lap desk she carried in one of her trunks, which were eventually forwarded to Confederate President Jefferson Davis. She was put on a steamboat bound for Virginia on December 4, 1863.

Exile in Virginia
Goldsborough was received warmly upon her arrival in Richmond, where she began organizing her diary. She remained in Richmond for the rest of the war, working at the Treasury Department in the mornings and in a hospital in the afternoons. Throughout her stay there she continued her struggle to provide needed supplies and medicine in addition to caring for the wounded in area hospitals. After the war, she returned to Baltimore.

Marriage and Family
In 1874 thirty-eight-year-old Euphemia Goldsborough married Charles Perry Willson, a native of Frederick County, Maryland and widower of one of her closest friends. They settled in Summit Point, West Virginia. She became stepmother to his five children, and gave birth to three more. Two sons died in childhood, but her daughter Ann grew to adulthood. Their descendants still live in Summit Point.

Euphemia Goldsborough died of cancer March 10, 1896. Her obituary accurately states that, “Into every Federal prison in the United States where Confederate soldiers were confined went articles of comfort, both of food and raiment, to the suffering prisoners, while she worked day and night to procure funds to further that purpose.”

Goldsborough was inducted in the Maryland Women’s Hall of Fame in 1995, the first Confederate woman to be so honored.