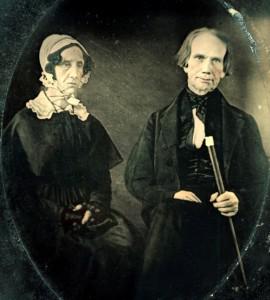 Lucretia Hart was born March 18, 1781 in Hagerstown, Maryland into a wealthy and socially prominent family. She moved to Kentucky with her parents in 1784. Henry Clay was born on April 12, 1777, in Hanover County, Virginia to a middle-class family. Clay studied for the bar with the eminent George Wythe [link], and at age 20, moved to Lexington, Kentucky, where he developed a thriving practice and met his future wife.

After a brief courtship, Lucretia Hart married Henry Clay April 11, 1799 at her family home in Lexington, Kentucky. Though Lucretia was not physically attractive, neither was Clay. Far more important were her family connections, which placed Clay among the best and most influential political circles in Kentucky. That he loved to drink and gamble was no drawback in an age that admired both vices.

Because of her husband’s frequent absences from home, Lucretia took over the management of their property, and she proved to be a competent businesswoman, selling milk, butter and cured hams to earn extra money when necessary.

By 1814, the Clays desperately needed someone who could help maintain order as well as educate their seven children. Lucretia offered private tutor Amos Kendall room, board, use of her husband’s extensive library, and $300 a year. He eagerly accepted the offer and began his duties on May 5.
Kendall gave them lessons every morning and tried to manage this high-spirited bunch. In his diary the tall, lanky teacher from New England paid tribute to the generosity and kindness of Mrs. Clay.

After Henry Clay’s return from Europe where he negotiated the Treaty of Ghent, three more children were added to the family group – Laura, James and John. Ten house servants, the children, visiting relatives and a constant round of guests made Ashland a lively home and a place of lively hospitality.

Political Partner
Henry Clay soon established a successful legal practice and gained a reputation for his legal skills and courtroom oratory. Some of his clients paid him with horses and land. His most famous client was Aaron Burr in 1806 when U.S. District Attorney Joseph Daviess indicted Burr for planning an expedition into Spanish Territory west of the Mississippi River. Clay successfully defended Burr, but Thomas Jefferson later convinced Clay that Daviess had been right. Clay was so upset by this that years later he refused to shake Burr’s hand.

The responsibilities Lucretia took upon herself in caring for their children and their properties made it possible for Clay to stay away for months at a time without concern for his family or possessions. While still in his 20s, Henry Clay was elected to the state legislature, in which he served for six years, until 1809.

As he served his state and his country, Henry Clay became one of the most popular and influential political leaders in American history. He established his great reputation in the United States House of Representatives, where he served intermittently from 1811 to 1825.

In his first term, Clay became one of the leading War Hawks – young men whose clamor for hostilities with England helped bring about the War of 1812 between the United States and the United Kingdom. He then helped negotiate the Treaty of Ghent, the peace treaty that ended the War of 1812, and signed it on December 24, 1814. In 1815, while still in Europe, he helped negotiate a commerce treaty with Great Britain.

In 1820-21 it was Clay above all who engineered the Missouri Compromise, quieting the harsh controversy that had erupted by maintaining an equal balance between free and slave states. Although he himself was a slave owner, Clay’s views on slavery were moderate. His genius in the art of compromise three times resolved bitter political conflicts that threatened to tear the nation apart, winning him the title The Great Pacificator.

In the presidential election of 1824, after his own candidacy had failed, Clay threw his support to John Quincy Adams, whom the House early in 1825 elected as the sixth president. When Adams named Clay secretary of state, his Jacksonian opponents charged “corrupt bargain!” The charge was unfair, but Clay was haunted by it throughout his subsequent career.

Although Clay was a practical politician of flexible rather than rigid beliefs, he did emerge as the great champion of the “American System.” He called for a protective tariff in support of home manufactures, internal improvements (federal aid to local road and canal projects), a strong national bank, and distribution of the proceeds of federal land sales to the states.

Elected to the U.S. Senate in 1831, Clay served in that body until 1842 and again from 1849 until his death. In 1833 he devised a compromise tariff that resolved the crisis brought on by South Carolina’s attempt to “nullify” the prevailing tariff set by Congress. In the same period he became a leader of the new Whig party that emerged to oppose Andrew Jackson‘s administration.

Perhaps the most heartbreaking event of Clay’s career was his close defeat in the presidential contest of 1844, when his reluctance to back the annexation of Texas cost him support in the South. Many believe that his greatest service to the nation came in 1850, when he helped win acceptance for a compromise that ended, at least temporarily, the threat of civil war over the issue of slavery in the new territories.

Clay was given much of the credit for the success of the Compromise of 1850. It quieted the controversy between Northerners and Southerners over the expansion of slavery, and delayed secession and civil war for another decade.

Ashland
In 1804, Henry Clay began to acquire land for a farm for his young family. He had lived in Lexington since 1799, but by 1804 Clay was ready to move from his town home on Mill Street to a more substantial residence on the outskirts of town. By 1809, the center block of their new home was complete and the family were residing on the farm Clay named Ashland, for the ash trees abundant on the property.

When completed, the brick mansion stood two and a half stories high, with two one-story wings. After the wings were added, the house measured 126 feet long by 57 feet wide. A serpentine carriage way, approximately 225 yards in length, snaked its way to the mansion through a grove of cypress, locust and cedar trees. The smokehouse, dairy house, carriage house and slave quarters were located a short distance away.

Purchased for approximately ten thousand dollars, the estate grew to a four hundred acre plantation. Lucretia Clay studied agriculture, and she supervised the overseer and became something of an oracle among farmers in the vicinity. She loved her home and all the domestic chores associated with running it. She hated the social whirl in Washington that so attracted her husband later on.” 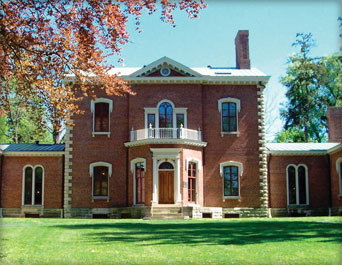 Lucretia was very much the woman of the house at Ashland, organizing the kitchen gardens and overseeing the entertainment of many famous visitors. It was a great event when Clay came home from Washington, often bringing important guests with him. Among those were James Monroe [link], Daniel Webster, Martin Van Buren, the Marquis de Lafayette, Vice President John C. Breckinridge, Abraham and Mary Todd Lincoln, among others.

By 1835 all six daughters had died of varying causes from whooping cough to yellow fever to complications of childbirth, and Henry Clay Jr. was killed at the Battle of Buena Vista during the Mexican-American War. Despite numerous family tragedies, the Clays had gay times at Ashland.

Henry Clay deeply loved Ashland, the farm and home he had built upon it. For him, it provided a place of refuge and sanctuary from a difficult and often disappointing outside world, a safe haven to which he might regularly escape from the burdens and hardships of public life. On April 15, 1849, Clay wrote:

I am in one respect better off than Moses. He died in sight of, without reaching, the Promised Land. I occupy as good a farm as any that he would have found, if he had reached it; and it has been acquired not by hereditary descent, but by my own labor.

Despite his fragile health at the time, Henry Clay returned to the nation’s capital in late 1851 to serve a final term as senator. Over the next few months his condition rapidly deteriorated.

Befitting Clay’s status as one of the most respected and influential political figures of his time, his body was placed in the Capitol rotunda, making him the first person in American history to lie in state in the United States Capitol. Impressive ceremonies were held in Washington, New York, and other cities as Clay’s body traveled for the last time back to Ashland.

Upon arriving home, Clay’s body remained overnight at Ashland while Lucretia kept watch. The next morning, after a memorial service on the front lawn, the funeral cortege left Ashland. Storefronts along the way were elaborately draped in black, all businesses in Lexington closed, all traffic was halted, and silence was ordered as the procession passed.

Clay’s body was then interred in Lexington Cemetery. Today, one of Lexington’s most recognized landmarks is the towering figure of Henry Clay standing high above the Cemetery looking over the city toward Ashland.

Late Years
Henry Clay’s will dictated that Lucretia would have a life estate in the property, but when she left or died, the property would be sold to settle the estate. A short time after Clay’s death, Lucretia moved to her son John’s home (called Ashland on Tates Creek) and Ashland was sold to her son James, who found the mansion in a state of serious disrepair. He arrived at the difficult conclusion that there was only one thing to be done: raze the house and rebuild.

James Clay carefully rebuilt Ashland as a memorial to his father. James had the house torn down, taking care to save all materials that could practically be salvaged. He then rebuilt the home on the existing foundation following his father’s original floor plan. He added certain Italianate, Greek Revival and Victorian details to bring the house into the more current style, but essentially recreated his father’s home.

Civil War at Ashland
On October 18, 1862, as Confederate troops were retreating from the Battle of Perryville, action took place on the grounds of Ashland. Approximately 1,800 Confederate troops under the command of General John Hunt Morgan engaged in a skirmish with 294 Union troops from the Third and Fourth Ohio, who were camped on farmland at Ashland. Morgan’s men captured a total of 290 Union soldiers, and four Union soldiers were killed.

By the time of her death on April 7, 1864 at the home of her youngest child, Lucretia Clay had buried all but four of her eleven children. She is buried beside her husband in the family vault in Lexington Cemetery.