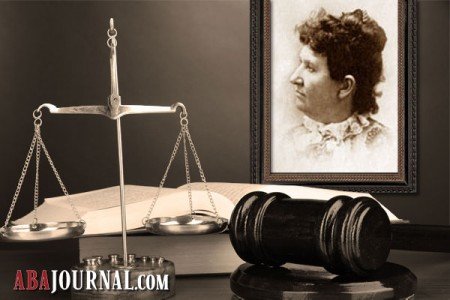 Ada Kepley was the first woman in the United States to graduate from law school (1870). When she applied for a license, she was told that Illinois law did not permit women to practice law. By the time the law was overturned, Kepley had diverted her energies to the support of social reforms, particularly the temperance movement.

Ada Harriet Miser was born February 11, 1847 to Henry and Ann Miser in Somerset, Ohio, where she spent most of her childhood. Her parents were . In 1860 her family moved to St. Louis, Missouri, where Ada completed two years of high school. The Misers then moved to Effingham, Illinois, a pioneer settlement, where her parents ran a hotel and her mother had a book store and circulating library. Ada lived there for the rest of her life there.

Marriage and Family
In 1867, Ada Miser married Henry B. Kepley, who had his own law practice in Effingham, Illinois. Henry trained her to be his legal assistant, but with her husband’s support and encouragement, she soon decided that she wanted a legal career of her own. Although it meant a separation of nearly 200 miles, Ada went to Chicago to study at the Union College of Law (now Northwestern School of Law) in 1869.

Legal Career
When she earned her Bachelor of Laws (LL.B.) degree in 1870, Ada Kepley became the first woman in the United States to graduate from law school. When Kepley applied for a license to practice law, she was informed that Illinois law did not permit women to enter the learned professions: law, medicine and theology.

Henry Kepley helped his wife challenge this ruling by drafting a bill forbidding sex discrimination in the learned professions. Although the bill was passed and became law in 1872, by then Ada’s efforts had been diverted to reform issues; most notably women’s suffrage and temperance. She did not apply for and receive her license to practice law until 1881, and while she occasionally appeared in court, she had no steady practice.

Temperance Movement
With no chance of winning, Ada Kepley also ran for Illinois State Attorney General as the Prohibition Party candidate in 1881, promoting temperance and a woman’s right to vote and hold public office. Of this election, she said, “There wasn’t a ghost of a show, but it was good agitation.” She continued to agitate for temperance and women’s suffrage.

Kepley briefly resigned from the Prohibition Party when the women’s suffrage plank was eliminated and did not return until it was replaced, stating:

I work as hard as a man. I earn money like a man; I bear the burdens of Community like a man. I am robbed as a woman! I have no voice in anything or in saying how my money, which I have earned, shall be spent. The men of Illinois and the United States run their hands into my pockets, take out my hard earned money, and say impertinently, “What are you going to do about it, you can’t help yourself.

While she strongly supported the women’s suffrage movement, temperance work was Kepley’s passion. She held offices in the Woman’s Christian Temperance Union (WCTU) at the local, county, state and national levels. In 1883 she wrote a seven-page pamphlet, The Ways to Teach Temperance.

Without children or her own, Kepley organized the local children into a temperance group she called the Band of Hope, which focused on educating the youth of the Effingham, Illinois area concerning the hazards of alcohol addiction. Her youthful squadron attended WCTU rallies and picketed in front of taverns as Kepley went inside and attempted to destroy the supply of liquor with her pickaxe.

In 1883 Kepley distributed a circular informing women of their existing voting rights and how to exercise them. At that time women could vote in elections for school directors and school trustees. The circulars, co-signed by Kepley on behalf of the Illinois WCTU, explained to readers that it was important to vote in these elections to prove to Illinois legislators that women did want to vote. She was twice elected to serve on the local school board and was the first woman School Director in Effingham County.

Kepley belonged to a number of women’s organizations, notably the Equity Club, a correspondence network which supported women pioneers in the legal profession. In 1883 she was a founding member of the High Cult Emerson Club, a women’s reading circle. She was president of the club for 13 years and represented it at the 1895 annual meeting of the Illinois Federation of Women’s Clubs.

From 1885 to 1896 Kepley published The Friend of Home, a monthly temperance paper in which she published the names of men who frequented saloons. In opposing the sale of alcohol, she was once beaten over the head by an angered saloonkeeper. In 1897 she was attacked by an intruder in her own home, who turned out to be the son of a liquor dealer. He attempted to shoot her, but missed and wounded her dog instead.

Through her association with women leaders like Frances Willard of the Woman’s Christian Temperance Union and Susan B. Anthony, co-founder of the National Woman’s Suffrage Association, Kepley gained national recognition in these organizations. Frances Willard attended a Temperance rally in Effingham at Kepley’s request.

A Free Thinker
An unusual woman for her times, Kepley was not interested in organized religion, and declared herself a free thinker:

Her husband introduced her to the Unitarian religion and she was ordained as a Unitarian minister by Jasper L. Douthit, at the First Congregational (Unitarian) Church in Shelbyville, Illinois in 1892. She never actually accepted a minister’s position but for twenty years she preached from the pulpit of The Temple, a former Southern Methodist church which her husband purchased, and which they dedicated to the temperance cause.

Kepley later wrote about The Temple:

Our Band of Hope rallies centered here, the Festivals of the year; opening, closing, New Years, Valentines Day, Easter were all held in its precincts. Our walls were hung with banners and pictures. We marched, we sang; young minds were shaped, men and women were lifted up and their feet set in a good way and out of that work the Churches were enlarged.

Kepley also promoted the social purity movement, which was first formed in opposition to the legalization and regulation of prostitution, and quickly spread to other sex-related issues such as sexually segregating prisons, eliminating abortion, opposing contraception and censoring pornography. After the local postmaster refused to remove a poster with a half-nude woman advertising a female minstrel show, Kepley tore the poster down herself. She was arrested and fined $20.

Late Years
After her husband’s death in 1906, Ada was devastated and her monetary resources were few. In an attempt to assuage her grief, she sold their home and moved to a farm near Mason, Illinois, but she was unable to make a living from farming. Within the next few years, she lost the farm and was forced to move to a small home in Effingham, where the townspeople looked upon her as an eccentric.

She began a writing career in an attempt to support herself, writing poetry and her autobiography, A Farm Philosopher: A Love Story (1912). During the First World War, she wrote a song, “My Sweetheart Over the Sea Who Fought for Liberty.” In 1916, and published The Effingham Town and Country Song Book: the First Town and Country Song Book in the World, but sales of these publications did not provide her with much income.

Most of the 520 acres that is now called Wildcat Hollow State Forest was part of the Ada Kepley farm. She wrote about this area:

My farm is in Mason township, Effingham County, Illinois. It has prairie, bottom and upland fields, and much pasture land. The little Wabash River and Fulfer Creek run through it. There is much timber on it, grand old trees, and trees coming on; lovely ravines with gray old rocks – and ferns and mosses and wild flowers and pools of water where the cattle and other stock drink, and things that minister to the sense and love of grandeur and beauty.

From my upper window I can see the gray old covered wagon bridge, a relic of the past, that crosses the Wabash River, and just beyond that are the great arches of the magnificent concrete Illinois Central Railroad bridge that stretches across the river like an old Roman Aqueduct – the old and new in sharp contrast.

Too proud to accept charity from friends, Ada Kepley died in poverty June 13, 1925 at age 78, a charity case in St. Anthony’s Memorial Hospital, and is buried in Oak Ridge Cemetery in Effingham, next to her husband Henry.