Pioneer Doctor and Educator of Women in the Medical Professions 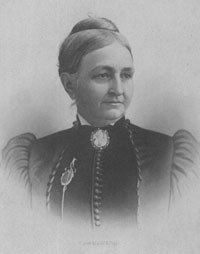 Dr. Mary Harris Thompson (1829–1895) was one of the first women to practice medicine in Chicago, and by some accounts the first female surgeon in the US. She was founder, head physician and surgeon of the Chicago Hospital for Women and Children, founder of the Women’s Medical College, the first medical school for women in the Midwest, and Chicago’s first nursing school.

Early Years
Mary Harris Thompson was born April 15, 1829 in Fort Ann, New York. She began her studies at a nearby school, then transferred to Fort Edward Institute in Fort Edward, New York, and then to West Poultney Academy in Vermont. While at West Poultney, she was encouraged to “prepare herself in some other institution and return to become instructor in physiology, anatomy and hygiene, a department which was desired should be added to the Poultney school.”

Upon graduating from the New England Female Medical College, Thompson moved to Chicago, where there was little competition for a woman physician. In July 1863 she began working for the Northwestern Sanitary Commission’s Chicago branch under Dr. William G. Dyas and Miranda Dyas, caring for women and children who had lost their husbands and fathers in the Civil War.

Chicago Hospital for Women and Children
Thompson was limited in her ability to care for the overwhelming numbers of women and children seeking medical help. Of the two existing hospitals in Chicago, one would not admit women as patients, and neither allowed women doctors to serve on their staff. Therefore, Dr. Thompson began to work toward establishing her own hospital.

The Chicago Hospital for Women and Children opened in May 1865 at the corner of Rush and Indiana streets with fourteen beds. Dr. Mary Harris Thompson served as its head physician and surgeon, and chief of staff – positions she kept the rest of her life. The Hospital provided medical care to indigent women and children and clinical training to women medical students, which was unavailable elsewhere in Chicago.

The hospital depended upon the aid of wealthy Chicago women who raised funds and managed all administrative duties. Several male doctors served as consulting physicians who aided Thompson in her medical and surgical practice, and provided the Hospital with support because of a widespread prejudice against women physicians. The first facility was small, with fourteen beds and a dispensary (pharmacy).

However, male students and faculty complained that women in the classroom inhibited discussion of indelicate subjects, and some clinical work and lecture material were omitted entirely. Although they agreed to be observed in teaching situations, some patients also felt uncomfortable in the presence of female students. As a result, the school asked the women to leave at the end of one session, and no more women were admitted there until 1926.

Thompson maintained her position at the hospital, becoming one of the best-known women surgeons in the nation. She specialized in pelvic and abdominal surgery and also sought to improve current surgical instruments by inventing her own. Because of her competence, some males in the field who had doubts about women’s capacity to practice medicine changed their views. She used her influence to aid women in pursuing careers as physicians.

The first student was Julia Cole, one of the three women who had been expelled from Chicago Medical College with Dr. Thompson. Cole passed exams for the first year and part of the second year, including dissection and clinical requirements. She completed her studies and graduated from Woman’s Hospital Medical College in 1871. It was noted that there were “17 matriculates, and the session was considered a real success.”

Traditionally initial medical education is divided between preclinical and clinical studies. The first two years of medical school – preclinical studies – are a mixture of classroom and lab time. Students take classes in basic sciences, such as anatomy, biochemistry, microbiology, pathology and pharmacology.

In the third and fourth years, medical students do rotations at hospitals and clinics, during which they assist residents in a particular specialty such as surgery, pediatrics, obstetrics and gynecology, internal medicine or psychiatry. Clinical training gives students a breadth of knowledge and helps the student consider potential career paths.

The Woman’s Hospital Medical College provided equal educational opportunities and clinical experience working with patients for female medical students in the Chicago area. Graduates of the school, who seldom received positions in male hospitals, became interns, residents and attending physicians in the Hospital.

The Great Chicago Fire of 1871 completely destroyed the buildings of the college, the hospital and the homes of most of the faculty members. Temporary accommodations were set up quickly to deal with the aftermath. Thompson moved her patients to the homes of friends, and she and her staff treated burn victims, male and female, in a private home on Adams street. The College held classes in an Adams Street residence a few blocks from the hospital.

Training School for Nurses
After receiving $25,000 from the Relief Aid Society of Chicago in 1872, a permanent building for the hospital was purchased at Adams and Paulina Streets, and the hospital and dispensary reopened that same year. In 1874, another building on the property became the new Training School for Nurses, allowing Dr. Thompson to realize her dream of training women to became nurses. In the hospital’s early years this was not possible because of the facility’s limited space. 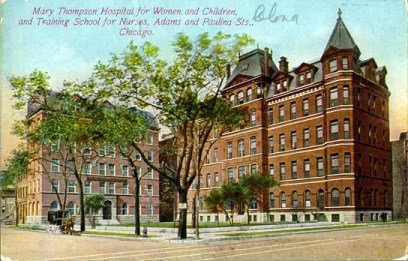 Women from the Chicago area were allowed to attend lectures at the new nursing school and to spend a certain number of morning hours in the wards daily. Each undergraduate nurse was required to serve in the several departments for two years. The nurses received training in various medical skills, such as securing and cleaning wounds, administering proper medications to patients, and numerous other duties.

The “First Nurses Training School in the Middle West” grew with the hospital, and allowed Dr. Thompson to set her own high standards in medical care. Her school also began training nurses in anesthesiology, which can be attributed to Thompson and her specialized nursing program. The nurses with this new training were sought after by hospitals all over the country.

A building was later purchased for the Woman’s Hospital Medical College at 337 South Lincoln Street which provided “two amphitheaters, a well equipped chemical laboratory and a convenient, well lighted dissecting room.” Despite of having a faculty consisting “of some of the most eminent professors in the city,” by 1876, dissatisfaction had grown among the students of the College.

A committee was organized to investigate the causes and found that students’ dissatisfaction resulted from “lack of clinical advantages…; the bad condition in which the dissecting room was kept last winter; … irregular attendance of one of the professors; … [and that the] college building is not proportionate in elegance and ornamentation to the dignity of this great institution.”

In 1877, the faculty determined that the College was in an “anemic debilitated condition” due to inadequate facilities, lack of teaching apparatus and material, and insufficient interest and involvement of the faculty.” In 1879, the Woman’s Hospital Medical College separated from the Hospital and the name was changed to Woman’s Medical College of Chicago.

Dr. Byford chaired the committee to reorganize the school. A new building was built, financed mostly by loans from the members of the new faculty. In 1879, the name was changed to the Woman’s Medical College of Chicago. Dr. Thompson joined the faculty as clinical professor of gynecology. During this time the school’s reputation and enrollment increased substantially. In 1885 a new building was erected for the school.

Notable professors joined the faculty of the Medical College, including Drs. William Heath Byford, Mary Harris Thompson, Marie J. Mergler, Bertha van Hoosen (1863-1952), and others. But Northwestern University failed to invest money in the school. As other medical schools in Chicago began accepting women, the school was abruptly closed in 1902.

The following comment made by one of the school’s trustees appeared in a Chicago newspaper, dated January 4, 1902, and illustrates the chauvinistic views of the time. Trustee James H. Raymond said of the abandonment of the college:

It is impossible to make a doctor of a woman. We have run the Women’s Medical School at a loss of £5,000 a year. Women cannot grasp the chemical and pharmaceutical laboratory work, the intricacies of surgery, or the minute work of dissecting. Fifteen years ago the graduating class of men and women signed a memorial saying that coeducation was a failure. Then we conducted the college exclusively for women, and it has been worse than a failure.

Dr. Thompson continued to work at the institutions she founded for as long as her health remained viable. By the time of her death, she had gained international recognition both as the first female surgeon in Illinois, and for opening up the healthcare profession to women.

Dr. Mary Harris Thompson established some important firsts for women in her lifetime: 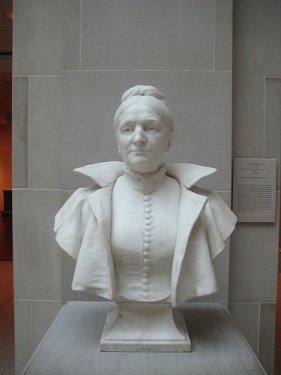 Shortly after her death, the board of the Hospital renamed the facility the Mary Thompson Hospital for Women and Children.