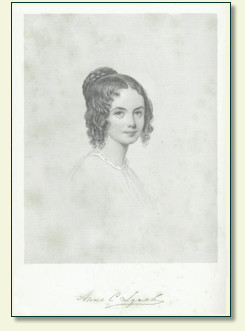 Anne Lynch Botta was a poet, sculptor and salon hostess in the mid-to-late nineteenth century. The most well-known writers, actors and artists of the era were among the creative people who attended the gatherings Botta held at her home in New York City. Edgar Allan Poe read his early drafts of ‘The Raven’ there, while Margaret Fuller and Ralph Waldo Emerson discussed transcendentalism.

Early life
She was born Anne Charlotte Lynch in Bennington, Vermont to Patrick Lynch and Charlotte Gray Lynch. Her father took part in the United Irishmen Rebellion of 1798 in Dublin, for which he was imprisoned and then banished from Ireland. He came to the United States at the age of 18, eventually making his way to Bennington where he set up a dry goods business.

There Patrick Lynch met his future wife; they married in 1812 and Anne was born November 11, 1815. Anne had an older brother Thomas Rawson Lynch (1813-1845). Patrick Lynch died when Anne was four years old, shipwrecked off the coast of Puerto Principe in the West Indies, while securing merchandise for his dry goods store. Charlotte Gray Lynch and her two small children moved to Hartford, Connecticut.

Literary Career
When she was sixteen Anne was sent to the Albany Female Academy in Albany, New York, where she graduated with high honors in 1834 and remained as a teacher for a few years. She then moved to Providence, Rhode Island with her mother in 1838, where she continued to teach and compiled an anthology, The Rhode Island Book (1841) – a selection of prose and poetry from the writers of that state, as well as several pieces of her own.

She then lived for a time in Philadelphia, where her poetry attracted much attention, and where she was part of a creative circle of friends that included actress Fanny Kemble – then at the height of her popularity – who introduced Lynch to other artists. Several of Lynch’s poems were contributed to the ‘Gift’ in 1845, along with a prose piece entitled ‘Leaves from the Diary of a Recluse.’

In 1843 Lynch began to invite these artists to her home for evening receptions, and it was said that “the very best literary society of Providence could be found in the parlor of Miss Lynch.” She continued to host these events after she and her mother moved to New York City in 1845. There she taught English composition at the Brooklyn Academy for Young Ladies and wrote for periodicals such as the New-York Mirror, The Gift, the Diadem, Home Journal and the Democratic Review.

In 1849, she published Poems, a volume of her poetry which was illustrated by distinguished artists. Edgar Allan Poe was a friendless author of Gothic tales living in New York City when Lynch met him and introduced him to her circle of literary friends. In 1846, Poe described her in ‘The Literati of New York City’ in Godey’s Lady’s Book magazine:

In person she is rather above the usual height, somewhat slender, with dark hair and eyes – the whole countenance at times full of intelligent expression… She is chivalric, self-sacrificing, equal to any fate, capable even of martyrdom, in whatever should seem to her a holy cause. She has a hobby, and this is the idea of duty.

Marriage
In 1853, Lynch met her future husband, Italian professor of philosophy Vincenzo Botta. He was on a mission to New York for the Sardinian government, and shortly after being introduced to Miss Lynch, decided to settle in New York. They were married in 1855. He became a professor of Italian language and literature at the University of the City of New York.

Literary Salons
Lynch and her new husband continued hosting intellectual gatherings every Saturday night at their home on West 37th Street, only now she had a companion, and an escort. While other salons had more to do with seeing and being seen than with providing a creative space in which artists could meet and collaborate, the Bottas’ receptions became known as a gathering place for great minds, and everyone left feeling stimulated and refreshed.

Botta’s salon played host to almost every major poet, painter, artist and musician of the 19th century and helped to launch the careers of many artists. Said a Boston writer:

It was not so much what Mrs. Botta did for literature with her own pen, as what she helped others to do, that will make her name a part of the literary history of the country.

Though by her own account her greatest skill was as a hostess, Botta continued to write poetry, newspaper travel letters and critical essays for several magazines. She published Poems (1849) and A Handbook of Universal Literature (1860), which which contained concise accounts of authors and their work and was widely used as a textbook in many educational institutions.

Late Years
Botta promoted the establishment of Barnard College, and founded the prize awarded every five years by the French Academy for the best essay on ‘The Condition of Women.’ She was also a sculptor of several portrait busts of famous people.

Editor Edmund Clarence Stedman wrote to Botta in 1883, asking her to write her autobiography, but she chose not to do so. By the time of her death, Botta had introduced numerous fledgling writers to the literary world, wrote numerous poems, reviews and magazine articles, and sculpted the likenesses of several businessmen, poets and politicians.

Anne Lynch Botta died of pneumonia on March 23, 1891 at age 75, and was buried at Woodlawn Cemetery in New York.

After her death, her husband had her poetry, correspondence and biographical information published as the Memoirs of Anne C. L. Botta: Written by Her Friends in 1893.

Since Botta refused to publish or write an autobiography of her life, this volume stands as a commentary from those close to her who fondly remember the woman who afforded her salon and heart to them. It is divided into four sections: ‘Recollections from Her Friends,’ ‘Selections from Her Letters,’ ‘Selections from Letters to Her’ and ‘Selections from Her Writings,’ in both prose and verse.
Among those who contributed to the volume were Andrew Carnegie, Mary Mapes Dodge, Charles Peabody and abolitionist Dr. H.W. Bellows.

An excerpt from ‘The Battle of Life’ by Anne Lynch Botta:

There are countless fields the green earth o’er,
Where the verdant turf has been dyed with gore;
Where hostile ranks in their grim array,
With the battle’s smoke have obscured the day;
Where hate has stamped on each rigid face.

As foe met foe in the death embrace;
Where the groans of the wounded and dying rose,
Till the heart of the listener with horror froze,
And the wide expanse of the crimsoned plain
Was piled with its heaps of uncounted slain: —
But a fiercer combat, a deadlier strife,
Is that which is waged in the Battle of Life.

The hero that wars on the tented field,
With his shining sword and his burnished shield,
Goes not alone with his faithful brand,
Friends and comrades around him stand;
The trumpets sound and the war-steeds neigh,
To join in the shock of the coming fray,

And he flies to the onset, he charges the foe,
Where the bayonets gleam and the red tides flow;
And he bears his part in the conflict dire,
With an arm all nerve, and a heart all fire.
What though he fall! at the battle’s close,
In the flush of victory won, he goes,
With martial music and waving plume,
From a field of fame to a laurelled tomb.

But the hero that wars in the Battle of Life,
Must stand alone in the fearful strife;
Alone in his weakness or strength must go,
Hero or craven to meet the foe;
He may not fly, — on that fated field,
He must win or lose, he must conquer or yield…