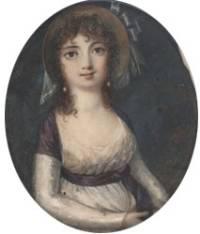 Elizabeth Arnold Poe (1787–1811) was an English-born American actress and the mother of the American author Edgar Allan Poe. She was noted for her beauty, her singing voice and her theatrical talent. Though he had no independent memory of his mother – she died a month before his third birthday – her untimely death greatly influenced Edgar Allan Poe’s writing.

Elizabeth Arnold was born to Henry and Elizabeth Arnold in London in the spring of 1787. Her mother was a stage actress in London from 1791 to 1795. Henry died in 1789, and in November 1795 mother and daughter sailed from England to the United States, arriving in Boston, Massachusetts on January 3, 1796. Young Elizabeth shared her mother’s talent and interest in the stage.

Career in the Theater
Elizabeth Arnold debuted on the Boston stage at the age of nine, only three months after her arrival in the United States. She played a character named Biddy Blair in a farce called Miss in Her Teens by
David Garrick and was praised in the Portland Herald: “Miss Arnold, in Miss Biddy, exceeded all praise.. Although a miss of only nine years old, her powers as an Actress will do credit to any of her sex of maturer age.”

Later in 1796, Elizabeth’s mother married musician Charles Tubbs, who had sailed with the Arnolds from England. The family traveled to Portland, Maine, hoping to establish a theater there. When that plan failed, they all joined with a manager named Mr. Edgar to form a theater troupe called the Charleston Comedians.

Young Elizabeth acted, recited at finale and danced. Singing, however, appears to be her most consistently-praised talent. Little is known about her mother but she disappears from theatrical records in 1798 and it is presumed she died shortly thereafter, leaving Elizabeth without parents at the age of eleven.

Elizabeth remained with the theater troupe, following the tradition at the time for actors to travel from city to city, where they performed for several months before moving on. One of the most impressive venues at which Elizabeth performed was the Chestnut Street Theater near Independence Hall in Philadelphia, which seated two thousand.

In December 1799 she participated in a monody performed in memory of George Washington, who had just died. The company included such illustrious theatrical talents as Mrs. Oldmixon (English comedienne and singer) and Thomas Cooper, who introduced the style of acting known as “grand declamation,” and Thomas Wignell, who built this company into unrivaled prominence in Philadelphia. By age 15 Elizabeth knew more than 70 roles.

Marriage and Family
In the summer of 1802, at age fifteen, Elizabeth married actor Charles Hopkins in Alexandria, Virginia, and played the Virginia circuit for three years known as Mrs. Hopkins. Hopkins died in Washington in October 1805, and at age 18 Elizabeth resumed her career in Richmond, Virginia.

According to legend, Baltimore-born David Poe, Jr. saw Elizabeth perform and joined her acting troupe, abandoning his family’s plans for him to study law. Elizabeth married Poe in 1806, only six months after her first husband’s death, thereafter appearing as “Mrs. Poe.”

The couple played throughout New England and the northeast before settling in Boston, where they stayed for three consecutive seasons of thirty weeks each in a theater that seated an audience of one thousand. Elizabeth was routinely praised for her acting talents while David’s performances were often harshly criticized, possibly due to his stage fright.

Over the course of her career, Elizabeth played some 300 parts, as well as choral and dancing roles, including Shakespeare characters, such as Ophelia in Hamlet and Juliet in Romeo and Juliet. Reviews at the time often remarked on her “interesting figure” and “sweetly melodious voice.” The Poes became close friends with a married couple, the Ushers, with whom they frequently acted.

Though times were difficult, the couple had two sons: William Henry Leonard, born in January 1807, and Edgar, born on January 19, 1809, at a boarding house near Boston Common. Elizabeth performed until 10 days before Edgar’s birth, and three weeks later she was seen on stage again. The economy of the Poes was strained by the birth of Edgar, and David went to Baltimore to his parents for financial help.

In the summer of 1809, the Poes traveled to New York and joined the Park Theatre Company for the 1809-10 season. Elizabeth was again pregnant. The company, in general, and the Poes, in particular, were not faring well. This excerpt from George C. Odell’s Annals of the New York Stage describes that climactic year:

…Poe, as Ireland says, soon sank into insignificance. As a matter of fact, he was withdrawn before the end of the season, but Mrs. Poe became a favourite…. As chief singing actress, she naturally enacted Ophelia to Cooper’s Hamlet…. Some of her specialties – Little Pickle and The Romp – were repeated often enough to warrant a belief in her popularity.

Though Elizabeth was now the “chief singing actress,” David Poe continued to receive lousy reviews and was ridiculed by the press. While still in New York, Poe, a hot-headed alcoholic, abandoned the stage and his family. In order to support her children Elizabeth, now 22, continued to act, sing and dance until the season ended on July 4, 1810.

Elizabeth left for Virginia shortly thereafter, appearing at the Richmond Theatre when the season opened in August 1810. She gave birth to a third child, a daughter she named Rosalie, in December 1810. Rosalie was later described as “backward” and she may have been mentally retarded. Elizabeth continued traveling as she performed.

The last year of Elizabeth’s life, as a member of Placide’s Company in Charleston, Norfolk and Richmond, was difficult. She struggled with the Company’s poor season, acting sixteen new parts, dancing in ballets and singing. The Norfolk Herald wrote on July 26, 1811: “…tho‚ grief may have stolen the roses from her cheeks, she still retains the same sweetness….

In August 1811, while staying at a Richmond boarding house, Elizabeth Poe began spitting up blood. Wrecked by overwork and emotional stress, it soon became apparent that she was suffering from tuberculosis. Her last performance came on October 11, 1811, as Countess Wintersen in a play called The Stranger.

By November Elizabeth had become a charity case and David Poe’s relatives were unwilling to help her. Friends and fellow actors the Ushers (the name may have inspired Edgar Allan Poe’s tale, “The Fall of the House of Usher”) took care of the children during Elizabeth’s illness.

Many in the Richmond area took an interest in her health. On November 29, the Richmond Theater announced a benefit performance on her behalf. A local publication, the Enquirer, reported her need for help: “On this night, Mrs. Poe, lingering on the bed of disease and surrounded by her children, asks your assistance and asks it perhaps for the last time.”

Elizabeth Arnold Poe died on December 8, 1811, at age 24, surrounded by her three small children: Henry, three; Edgar, two; and Rosalie, one. She is buried at St. John’s Episcopal Church in Richmond. News soon arrived that David Poe had also died of the same disease, within days of his estranged wife.

Died, on last Sunday morning Mrs.Poe, one of the Actresses of the Company at present playing on the Richmond Boards. By the death of this lady the Stage has been deprived of one of its chief ornaments. And to say the least of her, she was an interesting Actress, and never failed to catch the applause and command the admiration of the beholder.

The three Poe children were then split up. William was sent to his paternal grandparents in Baltimore. Rosalie was adopted by the Mackenzie family who ran a Richmond school. Edgar was taken in by John and Frances Allan, a well-to-do Richmond couple unable to have children of their own, and took the name Edgar Allan Poe.

Though he was young when she died, Edgar was greatly affected by Elizabeth Poe’s death and many of his works reflect her influence. The early loss of his mother and other women in his life, including his wife Virginia Clemm, may also have inspired Poe’s often-used literary theme of dying women. This theme is present in works like “The Raven.”

The effect on Edgar Allan Poe of never having reached the level of consciousness before his mother’s demise for him to know her affection is described in an 1835 letter to Beverley Tucker, who had mentioned to him in a previous letter that he had known Poe’s actress mother and that he recalled her outstanding beauty. Poe replied:

In speaking of my mother you have touched a string to which my heart fully responds. To have known her is to be the object of great interest in my eyes. I myself never knew her – and never knew the affection of a father. Both died… within a few weeks of each other. I have many occasional dealings with Adversity – but the want of parental affection has been the heaviest of my trials.