Author and One of the First Female Abolitionists 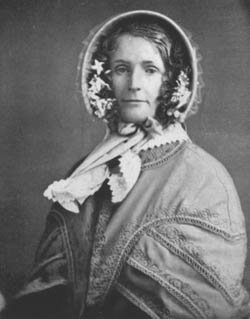 Maria Weston Chapman was a writer, editor, abolitionist, and right-hand woman of prominent abolitionist William Lloyd Garrison. She served as editor of the anti-slavery newspapers, the Non-Resistant and the National Anti-Slavery Standard. Although she shunned public speaking, Chapman organized bazaars and other fund-raising events for the movement, and was described by Lydia Maria Child as “one of the most remarkable women of the age.”

Early Years
Maria Weston was born on July 24, 1806 in Weymouth, Massachusetts, the eldest of eight children born to Warren and Anne Bates Weston, descendants of the Pilgrims. Maria’s birth was followed by those of Caroline in 1808, Anne in 1812, Deborah in 1814, Hervey in 1817, Richard in 1819, Lucia in 1822 and Emma in 1825. The children grew up on the family farm and went to local schools.

Though the Westons were not wealthy, they were well connected. Her uncle and prosperous London banker, Joshua Bates, invited Maria to England to complete her education. She spent several years of her youth living with his family. Upon her return to Boston in 1828, she became principal of a newly founded and socially progressive girls’ school, Ebenezer Bailey’s Young Ladies’ High School.

Marriage and Family
Two years later, on October 6, 1830, Maria married Henry Grafton Chapman, an affluent Boston merchant whose family was already well established as one of the city’s premier abolitionists. Over the course of their twelve-year marriage, Chapman gave birth to four children, one of whom died in early childhood.

By all accounts the Chapman marriage was a good one, free from ideological and financial strain. The Chapmans lived comfortably on West Street in the heart of Boston’s reform activity, near Elizabeth Peabody‘s bookstore where Margaret Fuller‘s Conversations convened and near Bronson Alcott‘s experimental school.

Maria was the only Weston sister to marry. Caroline and Anne were teachers in Boston. Deborah, though she preferred to stay in Weymouth, taught for a time in New Bedford. All four sisters were drawn into the antislavery movement. They were talented, articulate, witty, energetic and good-looking, outstanding individually and formidable as a group.

Social Reform
The Chapmans became central figures in the Boston Clique, which primarily consisted of wealthy and socially prominent supporters of William Lloyd Garrison. When the impeccably gowned and coiffed Maria first appeared at anti-slavery meetings, other women workers suspected her of being a spy. It seemed impossible that this socialite could be sympathetic with the slaves. They soon learned that nothing stood in the way of her dedication.

Both Maria and Henry believed in an immediate and uncompromising end to slavery, brought about by moral suasion – using informal pressure to convince the American people that slavery was wrong. They rejected all political and institutional coercion – including churches, political parties and the federal government – as agencies for ending slavery.

Though Maria came to the anti-slavery cause through her husband’s family, she quickly became dedicated to the movement, enduring pro-slavery mobs, social ridicule and public attacks on her character. Three of her five younger sisters also played vital roles, though Maria is generally considered to be the most outspoken and active. They founded an organization, circulated petitions, raised money, wrote and edited numerous publications, and left behind a remarkable correspondence.

As Chapman began to make her opinions known, it became clear to her that her message might have an even more forceful effect if she documented in writing the events taking place in Boston at the time. Chapman became chief assistant to Garrison, helping him to run the Massachusetts Anti-Slavery Society and to edit The Liberator, a widely-circulated abolitionist publication.

A famous incident related to the Boston Female Anti-Slavery Society was described by Deborah Weston as “the day when 5,000 men mobbed 45 women.” English abolitionist George Thompson had been touring New England, arousing the anger of those whose livelihood depended upon the cotton industry. Though he was not present, Thompson was thought to be attending an October 1835 meeting of the BFASS.

Local anti-abolitionists seeking to lynch Thompson crowded the streets of Boston and an angry mob converged on the building. Despite the uproar outside, the women calmly began their meeting with scripture reading and prayer. Chapman uttered a statement that was thereafter frequently quoted by abolitionists: “If this is the last bulwark of freedom, we may as well die here as anywhere.”

Chapman protested the lack of police protection and organized the frightened women to walk calmly, two by two, through the mob. The women continued their meeting at the Chapman house nearby. A few days after the mob scene, Maria and Deborah were hissed at by three men as they stood on the Chapman doorstep. It became impossible for Maria to walk down the street alone without hearing “odious epithets” shouted after her by shop clerks.

Primary among Chapman’s ideals was the belief that liberty is an inherent human right. When five clergymen of Boston accused “the most prominent abolitionists, of an unkind, improper and unchristian course” for allowing women to speak publicly against slavery, Chapman embraced women’s rights, too. Her steadfastness to the greater concept of human rights extended the scope of her efforts and incited her enemies to fear and despise her.

In 1835, Chapman assumed the leadership of the Anti-Slavery Fair, or Boston Bazaar, which had been founded the previous year by Lydia Maria Child and Louisa Loring. The Bazaar raised money for the work of the BFASS. Maria and her sister Anne were chief organizers of the fairs, which were popular Boston social events and raised thousands of dollars a year by selling various items.

In 1836 Maria Weston Chapman joined the editorial staff of The Liberator, the abolitionist paper published by William Lloyd Garrison. Her greatest talents lay in her writing abilities and her acerbic critique of those whom she believed to compromise the abolitionist cause.

Chapman was a prolific writer in her own right, publishing Songs of the Free and Hymns of Christian Freedom (1836), probably the first U.S. antislavery song book. How Can I Help to Abolish Slavery? (1855) was a recruiting pamphlet, citing reasons for joining the abolitionist cause. Aside from these works, she published poems and essays in abolitionist periodicals.

Her lively BFASS reports, Right and Wrong in Boston, appeared from 1836-1844 expressing a view of events not always shared by other members. When “an apparently irreconcilable difference of opinion” arose, Maria stated her intention not to suppress her own views. “I shall never submit to any creation of any society that interferes with my righteous freedom.”

The Anti-Slavery Convention of American Women of 1838 was held at Pennsylvania Hall in Philadelphia. This was the only occasion on which Maria Weston Chapman spoke in public. While she was introducing the next speaker, Angelina Grimke, a loud mob gathered outside, pelting the building and breaking windows with bricks and stones.

The following day, the numbers outside growing and becoming more threatening, the women – whites and blacks – had to link arms and force their way through the crowd to leave the Hall. The mayor of Philadelphia locked the doors and announced to the crowd that the remaining meetings had been cancelled. Soon after the crowd set fire to the building and burned it to the ground.

Editorial Duties
Beginning in 1839 The Liberty Bell, modeled after the popular gift books of the time, was sold at the Boston Bazaar. As editor, Maria wrote much of the content (essays, short fiction and poetry), but also solicited contributions from New England authors such as Wendell Phillips, Henry Wadsworth Longfellow, James Russell Lowell, Harriet Martineau and Ralph Waldo Emerson. Publication continued every year until 1846, and intermittently until the 1859 edition.

The New England Non-Resistance Society was founded at a special peace convention organized by William Lloyd Garrison, in Boston in September 1838. Leading up to the convention, conservative members of the American Anti-Slavery Society and the American Peace Society expressed discomfort with Garrison’s philosophy of “non-resistance” and the inclusion of women in public political activities.

In 1839 Chapman, Lucretia Mott and Lydia Maria Child were elected to the executive committee of the all-male Anti-Slavery Society. Some members were extremely upset by this decision, while leaders such as Garrison, Theodore Weld, Wendell Phillips and Frederick Douglass were as committed to women’s rights as they were to the abolition of slavery.

In 1840 divisions between Garrisonians and the more political wing of the anti-slavery movement split the AAS and the BFASS into two opposing factions. Maria – nicknamed Captain Chapman and the great goddess by her opponents and Lady Macbeth even by her friends – outmaneuvered the opposition to take control of a resurrected BFASS, which from then on mainly focused on organizing the Boston Bazaar.

Family Woes
Throughout their public lives, the Weston sisters continued their teaching careers, and Maria managed a family and household which became a center of activity in the anti-slavery movement. The Chapmans frequently entertained the abolitionist circle, including “coloured” guests, and housed out-of-town delegates to meetings.

Three daughters and a son were born to the Chapmans between 1831 and 1840. The youngest daughter died of tuberculosis, which also afflicted her father. A trip to the West Indies failed to restore his health. Henry Grafton Chapman died in 1842, and Wendell Phillips became guardian of the Chapman children. The abolitionist movement became the consuming work of Maria’s life.

In 1848 Maria Chapman took her children out of the emotional and political hotbed of Boston to complete their education in Europe. In the fall, her son Henry was settled at school in Heidelberg and his sisters in Paris, where Maria and her sister Caroline made their home an outpost of the American anti-slavery movement.

Despite the turmoil of the revolution overthrowing Louis Napoleon, Chapman quickly found sympathizers for her cause and recruited many contributors to the Liberty Bell from elite members of British and European society. She and Caroline shopped for items to ship to Anne in Boston for the Boston Bazaars.

During visits to England Chapman renewed her friendship with British writer Harriet Martineau, whom she had met in Boston in 1835. Struck by Maria’s “rare intellectual accomplishment,” Martineau made Chapman editor of her memoirs, published in 1877 as The Autobiography of Harriet Martineau with Memorials by Maria Weston Chapman.

By the time Henry had completed his education, his sister Elizabeth had married a French abolitionist, and the other Weston sisters had joined the Paris group. In spite of her prolonged absences, Chapman still figured prominently in the Boston movement.

Late Years
Back in the United States in 1855, Chapman returned to Weymouth, where she lived for the rest of her life. She made extended visits to her son in New York City and worked in his brokerage office. Her grandson, John Jay Chapman, long remembered the creative games she invented for her grandchildren. When the Civil War began, her sisters joined her in Weymouth.

Bloody Kansas – a series of violent political confrontations between abolitionist and pro-slavery elements between 1854 and 1861 – had brought the issue of slavery to the center of national debate. During this period Chapman began to deviate from Garrisonian ideology, by endorsing the Republican party and later by supporting both the war and Abraham Lincoln and his proposal for gradual, compensated emancipation of American slaves in 1862.

Unlike many Garrisonians – and Garrison himself – Chapman gave no indication of being conflicted between the principle of non-coercion and the Civil War’s objective of abolishing slavery through violent force. When emancipation came in 1863, she agreed with Garrison that it was time to close down the anti-slavery organizations.

Characteristically, Chapman was as resolute and unapologetic in her new beliefs as she had been in her old. In 1863, Chapman retired from public life and for the next two decades she “savored the perceived success of her cause and, equally, her own role in the victory.”

Maria Weston Chapman died of heart disease in Weymouth on July 12, 1885, at age 78. By 1890 all the sisters were buried in the Weymouth family plot.