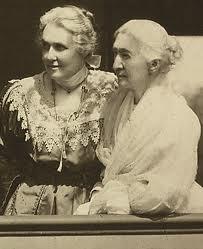 Elizabeth Smith was born September 20, 1822 in Peterboro, New York, the only daughter of antislavery philanthropist Gerrit Smith and abolitionist Ann Carroll Fitzhugh Smith to survive infancy. Gerrit Smith’s father Peter was a partner of John Jacob Astor, a major financier, and the town of Peterboro was founded by and named for Peter Smith.

Elizabeth was educated mainly by her father and governesses, except for a period in 1835-6, when she attended a ‘manual labor school’ in Clinton, New York, and in 1839, when she went to Friends School in Philadelphia. She enjoyed a financially secure life except for a short time during the Panic of 1837, when her family moved from their mansion to a cottage and Smith and her mother worked as clerks in her father’s land office.

Except for that brief period, Smith lived her life in large houses that were known as centers of hospitality and philosophical discussion. Her childhood was spent in Peterboro, New York, where her cousin, Elizabeth Cady Stanton, later a prominent suffragist, loved to visit. Stanton wrote:

Here one was sure to meet scholars, philosophers, philanthropists, judges, bishops, clergymen and statesmen…. There never was such an atmosphere of love and peace, of freedom and good cheer, in any other home I visited.

Stanton remembered that during her girlhood she “spent weeks every year” in Peterboro, engaging in “discussions on every possible phase of political, religious, and social life….” She notes that the “rousing arguments at Peterboro made social life seem tame and profitless elsewhere….”

What was not widely known at the time was that the Smith home in Peterboro was also a station on the Underground Railroad. Outbuildings on the Smith estate were used as refuges for escaped slaves. Elizabeth’s mother Ann Fitzhugh Smith frequently traveled the area in a closed carriage. On these trips she was often ‘replaced’ by a veiled fugitive slave on her way to Canada.

In 1837, Elizabeth and others were introduced to the fugitive slave Harriet Powell and allowed to speak to her for hours about her experiences. Powell had been rescued by local abolitionists from the Syracuse hotel where she was staying with her owners from Mississippi. She was taken to the Gerrit Smith house; from there she went by Underground Railroad to Oswego and crossed into Canada by boat.

In 1843, Elizabeth Smith married lawyer Charles Dudley Miller, and lived for a time in Cazenovia, New York. The Millers later occupied the ‘Cottage Across the Brook,’ on her father’s estate at Peterboro. The couple had four children born between 1845 and 1856: Gerrit Smith, Charles Dudley, William Fitzhugh and Anne Fitzhugh.

Dress Reform
By the mid-19th century, the health risks to women from wearing tight corsets and the desire for clothing that allowed more freedom of movement led to attempts to reform women’s dress. Not only were steel and whalebone corsets uncomfortable, but the many layers of petticoats which most women wore could weigh up to twelve pounds.

Elizabeth Smith Miller is best known for being the first to wear Turkish pantaloons under a knee length skirt. Shortly after designing the dress, she showed it to Elizabeth Stanton, who also began wearing it. After Stanton’s friend Amelia Bloomer described the new costume in her women’s rights paper The Lily, the new garment became known as bloomers.

This excerpt was taken from the Elizabeth Smith Miller collection at the New York Public Library:

In the spring of 1851, while spending many hours at work in the garden, I became so thoroughly disgusted with the long skirt, that the dissatisfaction… suddenly ripened into the decision that this shackle should no longer be endured. The resolution was at once put into practice. Turkish trousers to the ankle with a skirt reaching some four inches below the knee, were substituted for the heavy, untidy and exasperating old garment.

Soon after making this change, I went to Seneca Falls to visit my cousin Mrs. [Elizabeth Cady] Stanton… and she at once joined me in wearing the new costume. Mrs. [Amelia] Bloomer, a friend and neighbor of Mrs. Stanton, then adopted the dress, and as she was editing a paper [The Lily] in which she advocated it, the dress was christened with her name [bloomers]. Mrs. Stanton and I… endured, in various places, much gaping curiosity and the harmless jeering of street boys.

In the winter of 1852 and 1853, when my father was in congress, I was also in the cosmopolitan city of Washington, where I found my peculiar costume much less conspicuous. My street dress was a dark brown corded silk, short skirt and straight trousers, a short but graceful and richly trimmed French cloak of black velvet with drooping sleeves… and a low-crowned beaver hat with a long plume.

I wore the short dress and trousers for many years, my husband, being at all times and in all places, my staunch supporter… The dress looked tolerably well in standing and walking, but in sitting, a more awkward, uncouth effect, could hardly be imagined…

So, by degrees… I lost sight of the great advantages of my dress – its lightness and cleanliness on the streets, its allowing me to carry my babies up and down stairs with perfect ease and safety, and its beautiful harmony with sanitary laws, consequently the skirt was lengthened several inches and the trousers abandoned.

As months passed, I proceeded in this retrograde movement, until, after a period of some seven years, I quite “fell from grace” and found myself again in the bonds of the old swaddling clothes – a victim to my love of beauty…

All hail to the day when we shall have a reasonable and beautiful dress that shall encourage exercises on the road and in the field – that shall leave us the free use of our limbs – that shall help and not hinder, our perfect development.

Many women’s rights advocates took to wearing the Bloomer costume, but they too were so ridiculed that after a few years they abandoned it.

Elizabeth Smith Miller’s reform activities, including her advocacy for women’s rights, lasted throughout her life. Though she did not sign the original Declaration of Sentiments in 1848, she and her husband Charles signed the Call for the first National Women’s Rights Convention in Worcester, Massachusetts in 1850. They supported the women’s rights movement financially for the next 60 years.

In 1868, Miller was part of a group of women who sent a letter to the National Republican Convention in Chicago, asking them to include woman suffrage in their platform. She was with Stanton and Susan B. Anthony, Lucretia Mott and Matilda Joslyn Gage in the founding of the National Woman Suffrage Association in 1869.

Charles and Elizabeth Smith Miller and their children moved to Lochland, a lakefront estate in Geneva, New York in 1869. In 1878, she acted as an Ontario County delegate to Rochester’s thirtieth anniversary celebration of the first women’s rights convention, sponsored by the National Woman Suffrage Association.

Following Gerrit Smith’s death in 1874, Elizabeth worked with biographer Octavius Brooks Frothingham on the story of her father’s life. When Frothingham went so far as to allege that Gerrit Smith had prior knowledge of John Brown’s raid on Harper’s Ferry, Elizabeth ordered the publisher to recall the books, break their bindings, and remove the information. A second edition was prepared under her supervision.

Elizabeth Smith Miller was well known for her hospitality, efficient household management and culinary skills. Keeping the tradition established by her father and mother in Peterboro, she provided a welcoming environment for the movers and shakers of the women’s movement, and often opened her home to raise money for the women’s suffrage campaign.

In 1875 Miller wrote a popular cookbook called In the Kitchen, which also contains tips for running a household and information about entertaining. Some of the recipes include Peterboro Cake, Morrisville Candy, Geneva Kisses and her famous Peach Marmalade.

In 1897, a year after her husband’s death, Miller and her daughter were instrumental in arranging for Geneva to be the site of the annual convention of the New York State Woman Suffrage Association (NYSWSA). During this event she entertained speakers and many of the delegates in her home.

Shortly after this convention, her daughter Anne Fitzhugh Miller founded the Geneva Political Equality Club, and Elizabeth Miller served as its honorary president for the rest of her life. Because of their many acquaintances, the Millers were able to ensure that the Club had its share of famous speakers, including Charlotte Perkins Gilman, Lucy Stone, Carrie Chapman Catt, Anna Howard Shaw and Susan B. Anthony.

In 1907, when the NYSWSA again met in Geneva, delegates were once again invited to Lochland, where Miller hosted a memorial service for Mary Anthony, sister of Susan B. Anthony. Miller also hosted a “Piazza Party” for regional suffragists every year, and she was often gratefully acknowledged for her financial support to the suffrage cause.

Miller’s financial generosity also extended to the cause of education. Her money helped to establish schools for African Americans, and she gave substantial sums toward the establishment of William Smith College in her hometown of Geneva, where the Miller House was named in her honor.

In addition to entertaining suffragists and speakers who came to Geneva for their meetings, Miller’s home was a place of refuge for her cousin Elizabeth Cady Stanton throughout her life. Stanton often spent weeks on end at Lochland. Towards the end of their lives, both Stanton and Susan B. Anthony often spent summers at the estate.

Miller’s home was always open to all, no matter their color, sex, religion or political background. She spent her whole life fighting for human equality, teaching her daughter to do the same.

Between 1897 and 1911 Elizabeth Smith Miller and her daughter Anne Fitzhugh Miller filled seven large scrapbooks with memorabilia related to their work with women’s suffrage. These scrapbooks document the activities of the Geneva Political Equality Club, as well as efforts at the state, national and international levels to win the vote for women. They offer a unique look at the political and social atmosphere of the time and the efforts of two women who were major participants in the suffrage movement.