Businesswoman and Feminist in the Civil War Era 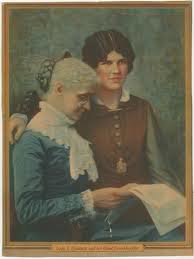 In an age when women were second-class citizens, Lydia Pinkham not only succeeded in a man’s world, she was one of the most successful American businesswomen of the 19th century. In the field of marketing, she is considered a pioneer and an innovater.

Lydia Estes was born February 9, 1819 in Lynn, Massachusetts, the tenth of the twelve children of William and Rebecca Estes, radical Quakers. William Estes was a shoemaker, but realized enough profit from a saltworks during the War of 1812 that by the time Lydia was born he had made a fortune in real estate.

The Esteses encouraged their children to be freethinkers. Mrs. Estes introduced the family to the teachings of Emanuel Swedenborg, a Swedish scientist and theologian who claimed to have had contact with the spiritual world. Followers of Swedenborg were abolitionists (opposed to slavery), vegetarians and abstained from drinking alcoholic beverages.

The fugitive slave and abolitionist leader Frederick Douglas was a neighbor and family friend. The Estes household was a gathering place for local and visiting abolitionist leaders such as William Lloyd Garrison. The Estes family broke from the Quakers over the slavery issue in the 1830s.

Lydia was educated at Lynn Academy and as a young woman, she worked as a midwife, nurse and schoolteacher. She joined the Lynn Female Anti-slavery Society when she was sixteen. In the controversies which divided the abolitionist movement during the 1840s, Lydia would support the feminist and moral positions of Nathaniel P. Rogers – temperance, women’s rights and the abolition of slavery. Her children would continue in the anti-slavery tradition.

In September 1843 Lydia married Isaac Pinkham, a 29-year-old shoe manufacturer, who would try various businesses without much success. Lydia gave birth to four surviving children: Charles Hacker Pinkham in 1844, Daniel Rogers Pinkham in 1848, William Pinkham in 1852 and daughter Aroline Chase Pinkham in 1857. (All the Pinkham children would eventually be involved in the Pinkham medicine business.)

A shoe manufacturer, Isaac soon was pursuing one speculative venture after another in hopes of attaining his father-in-law’s success. Consequently, his fortunes rose and fell as he tried various occupations and moved his growing family about.

Career in Business
Lydia Pinkham suffered from painful menstruation, and in her kitchen she devised an herbal concoction that lessened her monthly pains. Beginning in about 1865, she brewed large batches of a brown, bitter-tasting mixture of roots, herbs and 18% alcohol. The ingredients were generally consistent with the herbal knowledge available to her through such sources as John King’s American Dispensary which she is known to have owned and used.

Pinkham initially made the remedy on her stove and gave it away to any woman who requested it, and virtually all these ladies raved about its medicinal properties. It claimed to bring relief to women during the menstrual cycle by alleviating menstrual cramps, and also during menopause by counteracting depression, hot flashes and other symptoms. All ingredients in the compound had been official or semi-official in the U.S. Pharmacopeia or the U.S. Dispensatory for various female ills.

It is no mystery why many preferred to trust unlicensed “root and herb” practitioners and women who were willing to share their domestic remedies. During the last half of the 19th century, the reputation of the medical profession was low. Medical fees were too high for most Americans except in emergencies, and the drugs prescribed were more likely to kill than cure.

The timing of Pinkham’s business venture could not have been better. The family had attained some security during the Civil War years, but the financial Panic in 1873 resulted in banks in Lynn beginning foreclosure on mortgages. Isaac was sued and threatened with arrest for not paying his debts. Though the suit was eventually dropped, he was left a broken man no longer able to work.

All the Pinkham children secured jobs to support the household. Soon Lydia, with son William’s help, was brewing Pinkham’s Vegetable Compound in the cellar and writing advertising copy, and Daniel was peddling it. Children Charles and Aroline helped buy herbs and alcohol with their wages. And Isaac sat in his rocker and folded the four-page Guide for Women pamphlet that was included with each bottle.

Drawing on her pre-marriage experience as a political activist and pamphleteer for the abolition of slavery and for women’s rights, she wrote numerous pamphlets as effective sales pitches for the product. Her ads promised that the compound would cure “all those painful Complaints and Weaknesses so common to our best female population,” including everything from flatulence to “all ovarian troubles,” but it was most widely advised for menstrual pain and menopause.

Mass marketed from then on, Pinkham’s remedy became one of the best known patent medicines of the 19th century. Her strong suit was in marketing her product directly to women. When the Lydia E. Pinkham Medicine Company was officially organized in 1876, William was named proprietor (he had no debts). Pinkham also patented her recipe as Lydia Pinkham’s Vegetable Compound, which ensured family control over the herbal remedy for the next 50 years.

The Compound may have been a safe alternative to dangerous gynecology, but at first it was just one more cure-all in a sea of proprietary medicines. Daniel did his best to sell Pinkham’s mixture by circulating pamphlets and contacting druggists, yet sales were low.

It was an impulsive action by William that catapulted Pinkham’s compound ahead of all the other patent medicines. He stopped by the Boston Herald and asked how much it would cost to print the four-page Pinkham pamphlet on the front page. William spent 60 of the 84 dollars he had just collected from a drug wholesaler for the space. Within days new orders were coming in.

For years the company would spend a large percentage of its annual sales on advertising, but it paid off handsomely. The brewing operation moved out of the cellar and into a building down the street from the Pinkham home in 1878; the building then had to be enlarged.

Unsolicited testimonials poured in, and upwards of 150 letters a day came in asking Pinkham’s advice; these she answered personally in strict confidence. Pinkham urged customers to write to her with their medical concerns, and in a time when physicians were generally unknowledgeable about “women’s ailments” and women were discouraged from asking such questions, Pinkham’s replies were generally sound and helpful. Her daughter-in-law oversaw answering correspondence after her death.

In addition, the company published these letters from customers in Pinkham Pamphlets, which published Pinkham’s answers to women’s medical queries. These pamphlets were a means of distributing important medical advice to women in an era when the standard treatment for vaginal cramps was the removal of the ovaries – a dangerous procedure in the 19th century with a mortality rate of 40 percent.

In 1879 Daniel Pinkham had a brainstorm that would make his mother a cultural icon when he hit upon the idea of using his sixty-year-old mother’s picture as the company symbol. Pinkham posed for her portrait dressed in her best black silk dress with a bit of ruching at the neck and her hair swept up in a bun. Her composed countenance exuded caring and competence.

Pinkham’s smile began appearing in the press at a time when female faces were still rare enough in American dailies to seize a reader’s attention. Her likeness was put on product labels, newspaper advertising, lithographs, trade cards, souvenir plates and gift items. Business doubled as a result. It was estimated in the 1940s that some $40 million had been spent publishing Pinkham’s picture.

The American Medical Association criticized the compound’s effectiveness, and in her lifetime Pinkham was often condemned as a “snake-oil peddler.” Of course, most of her harshest opponents were men, and as Pinkham herself wrote in one of her pamphlets, “Only a woman can understand a woman’s ills.” The product – somewhat reformulated – is still available at most drug stores.

Of the alcohol content, Pinkham – herself and her children members of the temperance society – said it was necessary for the therapeutic effect and as a preservative. She claimed that consumption of the cure-all as directed would not conflict with temperance. However, because it was thought alcohol might aggravate menstrual disorders, by 1881 the company was also manufacturing the compound in pill and lozenge form.

Lydia Pinkham was without a doubt the dominant woman of her times. Oliver Wendell Holmes, William Lloyd Garrison, Susan B. Anthony, and many others were not strangers to the Pinkham household. Her name, picture and medicine became world famous and they allowed her siblings, children and grandchildren to successfully market her vegetable compound via a 14 1/2 oz. bottle well into the 20th century.

Distraught over the deaths of sons Daniel and William in 1881 from tuberculosis, Pinkham held frequent seances hoping to communicate with them. Late in 1882, she suffered a paralyzing stroke.

Lydia Pinkham died of a stroke on May 17, 1883 in Lynn Massachusetts at age 64 and was buried next to her sons.

At the time of her death, the business was already grossing about $300,000 per year. Labels and pamphlets were published in English, French and Spanish, and the product’s popularity continued to grow after her death, becoming a multi-million dollar business and one of the most popular patent medicines of the early 20th century.

Under the helm of son Charles, and with an enormous advertising budget, the business thrived and expanded into foreign markets. Sales gradually declined after peaking at $3 million in 1925. In 1968 the family-owned business sold out to Cooper Laboratories, which moved bottling operations to Puerto Rico.

The Pure Food and Drug Act of 1906 forced the company to reveal that the alcohol content of the compound. For the first time, users of the compound – many of whom were adamant non-drinkers – discovered that the Pinkham’s contained up to 20% alcohol. The new law also forced them to scale back the claim for cures on the labels.

Although Lydia Pinkham’s motives were partly self-serving, many modern-day feminists admire her for distributing information on menstruation and menopause, and consider her to be a crusader for women’s health issues in a day when women were poorly served by the medical establishment. In the process, she changed the lives of thousands of American women by drawing attention to serious female medical issues.

Pinkham’s company became a true multi-national corporation with production centers in Canada, Mexico and the United States. In 1922, Lydia’s daughter Aroline Pinkham Chase Gove founded the Lydia E. Pinkham Memorial Clinic in Salem, Massachusetts to provide health services to young mothers and their children. The clinic is in operation as of 2012, and it is designated Site 9 of the Salem Women’s Heritage Trail.