One of the First Lowell Mill Girls 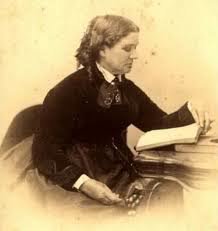 Lucy Larcom (1824–1893) was an American poet and one of the Lowell Mill girls. Although Larcom was a well-published poet in her lifetime, she is best known today for writing A New England Girlhood (1889). This autobiography is a classic book about the age of industrialization and her role in it as a textile mill worker in Lowell, Massachusetts – beginning at age eleven.

Lucy Larcom was born on March 5, 1824 in the coastal village of Beverly, Massachusetts, the ninth of ten children born to Benjamin and Lois Barrett Larcom. Lucy’s life was greatly affected when her father, a retired sea captain, died when she was eight. The fate of widows with large families was often uncertain, and from then on, Lois Larcom struggled financially.

The Lowell Mills
New England was being transformed from agriculture-based to an industrial economy, as Americans learned from English factories how to run water powered looms that spun and wove fabric – a task that women had previously done at home on spinning wheels and foot-peddled weaving looms. In Lowell, Massachusetts a series of textile mills were built along the Merrimack River, beginning in the 1820s.

The owners of the new factories needed a workforce that could follow complex instructions but accept relatively low wages. These were, however, the highest wages paid to women anywhere in America – from $1.85 to $3.00 a week. Thousands of girls decided to try mill work, many of them recruited from surrounding farms where female labor was not particularly valued.

Textile mills soon became the new nation’s largest employer of women. Most mill hands took their first job in their late teens and stayed an average of four years. By 1840, Lowell’s factories employed almost 8,000 workers between the ages of 16 and 35, and about 90 percent of those were female, the first women to have bank accounts in their own names.

Conditions in the Lowell mills were severe. Employees worked from 5:00 am until 7:00 pm, for an average 70 hours per week. Each room in the factory usually had 80 women working at machines, with two male overseers. Although the rooms were hot, windows were often kept closed during the summer so that conditions for thread work remained optimal, and the air was always filled with particles of thread and cloth.

Those who wrote about life in the mills always mentioned that the noise in the factories was shocking. It was described by one worker as “something frightful and infernal,” and many millworkers became deaf at an early age. The machinery was also dangerous, and more than one girl was accidentally scalped when her long hair got caught in the mechanism.

The mill girls, as they were called, were expected to abide by strict rules and live in a tightly controlled environment. They lived in boarding houses built by the hundreds near the mills, where textile workers lived year-round. A curfew of 10:00 pm was common, and church attendance was mandatory. About 25 women lived in each boarding house, with up to six sharing a bedroom.

Since there was no electricity for lights, working days were shorter in winter. When the mills closed for the night, many young women used their free time for self-improvement. They hired professors and studied literature, music and science by candlelight. Lucy studied history and botany.

The Larcoms at Lowell
Instead of taking the usual path of finding a stepfather for her eight children, Lois Larcom moved her family to Lowell, Massachusetts in 1835. The older Larcom girls worked in the textile mills, while Lois managed one of the boarding houses for mill workers. At first she attended school, but with the family struggling to get by, at the age 11 Lucy took a job at the mills.

Young girls usually started by sweeping up scrap cloth and broken thread, and then moved on to delivering supplies for loom operators. In their early teens, most learned to run the spinning machines that made thread. Weaving at power looms usually was the employment pinnacle – but Lucy Larcom rose to become a bookkeeper in the cloth room, a much healthier environment.

The Lowell Offering was a monthly periodical which featured essays, poetry and fiction written by the mill girls. It began in 1840 and as its popularity grew, workers contributed poems, ballads, essays and fiction. Lucy Larcom wrote many poems and short stories describing life at the mills which were published in the Lowell Offering.

The fact that it was published by factory workers drew national and international attention, and the editors were eager to show that industrial labor need not be degrading to women. However, they were also aware of the toll mill work took on women’s health.

In 1843 Larcom’s idealistic poetry caught the attention of John Greenleaf Whittier, a nationally known Quaker poet and abolitionist. Whittier encouraged her literary efforts, and they became life-long friends. She also became friends with Harriet Hanson Robinson, a fellow millworker who also became a poet and author, and years later a leader in the women’s suffrage movement.

Career in Education
In 1846, at age 22, after more than a decade in the mills, Lucy Larcom left Lowell to accompany her sister Emeline and Emeline’s new husband west to the Looking Glass Prairie area of Illinois. Larcom continued to write poetry, and in 1849 her work was included in Female Poets of America.

Although she had little formal education, Larcom had learned enough from her mother and older sisters that she was hired as a teacher in nearby Illinois. There she taught school for three years before finally realizing her dream of completing her own education.

By 1849, she had saved enough from her teaching salary to enroll at Monticello Female Seminary in Godfrey, Illinois – the mid-nineteenth-century equivalent of a women’s college. She graduated in 1852, after earning her teaching credentials, then returned to Massachusetts.

Needing a steady income, Larcom took a position at Wheaton Female Seminary in Norton, Masssachusetts, where she taught English literature, composition and other subjects from 1854 to 1863, and from 1865 to 1867, followed by many years as a visiting lecturer. Her teaching style was revolutionary and influential at Wheaton: she taught by lecture, reading and discussion, rather than by memorization and recitation.

Literary Career
Returning to Massachusetts in 1852, Larcom entered Boston’s literary world, publishing her first book Similitudes, from the Ocean and Prairie in 1853. When she won a major poetry contest in 1855, John Greenleaf Whittier introduced her to his publishing contacts. Soon her poetry appeared in numerous national magazines, including The Atlantic Monthly, Harper’s New Monthly Magazine and The New England Magazine. She also anonymously edited three volumes of Whittier’s work.

Like Whittier, Larcom was an ardent abolitionist and rejoiced when Abraham Lincoln was elected president. This excerpt from a letter she wrote to Whittier sums up her feelings:

I know you do not believe in war: neither do I, it is barbarous, it is hateful; and yet forced upon us as this is, there is an instinct of resistance to wrong within us all, the trumpet-call of Nature itself that drowns at once all previous beliefs and theories. If ever there was a cause for fighting, there is now; and I am not sure but that a bloody struggle would be most humane…

She became more conservative as she aged, however, and did not support Massachusetts’ Lucy Stone or other women’s rights leaders. Her chief ambition throughout her life was maintaining middle-class respectability, while also asserting women’s right to economic independence through education. The fact that she never married shows how fragile such freedom was at that time: a woman surrendered virtually all of her legal rights when she married; even the wages of her work belonged to her husband.

After leaving Norton because of failing health in 1862, Larcom spent the next 30 years of her life pursuing a literary career, publishing eight books of poetry. From 1865 to 1873, she was the editor of Our Young Folks, later renamed St. Nicholas Magazine. By the time of her death, she had written countless poems, magazine articles and children’s stories.

In 1889, at age 65, Larcom published her most famous work, which is still in print today. A New England Girlhood details not only her life as a Lowell mill girl but the story of an industrial experiment that completely transformed the economic and physical landscape of southern New England. It emphasizes the positive side of life in the early textile mills, yet is a valuable record of this unusual time in American history, when factories recruited teenage girls and paid them relatively well.

Although in some ways she was an atypical mill girl – coming to Lowell with her family rather than as a single young woman – in other ways, her experiences were representative of those who made up the original workforce in the Lowell mills.

Larcom’s independent lifestyle was not always easy; she was never wealthy, and although she would never admit to having a career, her ability to support herself through writing was still unusual for an unmarried woman of her era. Throughout her life she struggled with loneliness and self-doubt, overcoming them through work and faith.

Beginning in 1891, Larcom suffered increasingly frequent bouts of illness. In November 1892, she sorted her papers, destroying everything that seemed too private, including her journals from the 1860s and 1870s with their references to Frank Spaulding, whom she had been involved with romantically.

Lucy Larcom died in Boston on April 17, 1893 at age 69, and was buried in her hometown of Beverly, Massachusetts.

Larcom’s legacy is honored in Lowell, Massachusetts at Lucy Larcom Park, which honors her works of literature that recounted her life at the mills. Excerpts of her writings can be found on monuments, statues and other works of art throughout the park.