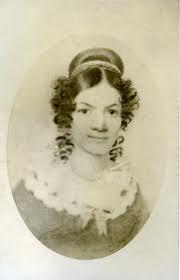 Childhood and Early Years
Jane Johnston Schoolcraft was born on January 31, 1800 in Sault Ste. Marie in the upper peninsula of what is now the state of Michigan. Her Ojibwe name was Bamewawagezhikaquay, which translates as Woman of the Sound that Stars Make Rushing through the Sky. One writer describes Schoolcraft as having been “intelligent, gentle, gracious and deeply religious,” and, physically, “fairly tall and slender, with dark eyes and hair, which she wore in ringlets.”

Jane was part Ojibwe and part Irish. Her mother Susan, or Ozhaguscodawayquay (Woman of the Green Valley), was said to be “the surest eye and fleetest foot among the women of the tribe.” Susan was also a storyteller, like her father, Waubojeeg, a revered Ojibwe chief of the North Shore of Lake Huron and both shores of Lake Superior. At the time of its initial contact with European settlers, the Ojibwe were the largest and most powerful of the Great Lakes tribes.

Jane’s father John Johnston was a white fur trader who had left Belfast, Ireland in 1790. After their marriage, Ozhaguscodaywayquay and John Johnston settled in Sault Ste. Marie, where together they built a prosperous fur trading business and raised eight children, while also playing leading roles in the surrounding Ojibwe and Euro-American communities.

Though it is unclear how much formal schooling Jane received, she learned English, reading, writing and the Bible from her father. She also learned about written literature from her father and his large library, and came to share his love for history and poetry.

Her father also took her abroad to study in Ireland in 1809. After spending time in Dublin, the two traveled to England together. Jane spent the winter of 1809-1810 with her uncle and aunt, John Moore and Jane Johnston Moore in Wexford, while her father attended to the affairs of his Irish estate, Criagballynoe.

Marriage and Family
Henry Rowe Schoolcraft was an Anglo-American explorer and ethnologist, who was one of the earliest writers on American Indian culture and history. Schoolcraft first came in contact with Native Americans while working as a geologist in Lewis Cass’ unsuccessful expedition to find the source of the Mississippi River in 1820.

After learning that the Indian tribes had oral stories, Henry Schoolcraft saw a practical value in translating the stories into written texts to present as literature to the American reading public. He wrote about Indian history, language, mythology, maxims, characteristics, and the role of the federal government toward the Indian. In 1822, Secretary of War John C. Calhoun appointed Schoolcraft as an Indian agent at Sault Ste. Marie, where he met and befriended the Johnston family in 1822.

On October 12, 1823, Jane Johnston married Schoolcraft, and he became extremely active in the community of Sault Ste. Marie. He was a founding member of the Historical Society of Michigan in 1828, a member of the legislative council for the Michigan Territory from 1828 to 1832, and superintendent for Indian Affairs from 1836 to 1841.

In 1824, Jane gave birth to their first child, William Henry or Panaysee (Little Bird). In November of 1825, Jane had a stillborn daughter, and Panaysee died in 1827. Afterwards, the couple had two more children – a son and a daughter who lived to adulthood. Jane’s marriage to Henry eventually became an unhappy one, and she separated from him in late 1830.

Literary Career
During the winter of 1826-1827, Jane and Henry Schoolcraft worked together to produce and publish The Literary Voyager or Muzzenyegun, a magazine that wholly focused on the Ojibwe. The Literary Voyager ran fourteen issues altogether and circulated in Sault Ste. Marie, Detroit and New York. It contained original works and retellings of traditional Ojibwe tales, written by Jane under the pen names Rosa and Leelinau.

However, Henry received the vast majority of credit for the publication. Until recently, critics have rarely, if ever, mentioned the writing and editing that Jane contributed to the magazine. Now, critics speculate about the extent to which Jane also contributed to Henry’s other writings. Of Algic Researches, one critic says that Jane’s “contribution to the final text can hardly be overestimated.” However, Henry only acknowledges her work in a perfunctory note in the text.

Ojibwe oral tradition – which Schoolcraft learned from her mother – is important in recounting the origin of the tribe and in conveying its moral and ethical values. Ojibwe ideas about truth, rationality, logic and causality, and the tribe’s ways of knowing are reflected in her writing. As a woman of Ojibwe decent, she was forced to deal with the political turmoil that the Ojibwe faced during the time of her writing.

Because Schoolcraft spoke both English and Ojibwe, she was able to record and retell the oral stories of her tribe. She also developed considerable literary skills that helped her to act as a scribe for the Ojibwe people. In essence, her education in the English language allowed her to capture the voice of her mother, a woman who never learned to speak English.

Schoolcraft wrote many of her stories “to preserve them for future generations as well as build bridges of understanding between Indian and white cultures.” Her retelling of Ojibwe mythology has allowed subsequent generations to learn about the Ojibwe system of beliefs. Had she not written them down, these stories may have been lost forever.

During the 1840s and 50s, the Ojibwe head chief Shingwaukonse used a compromising approach in his relations with whites to keep his culture thriving. He tried to keep relations open and to trade equally and peacefully with whites, which may be why Schoolcraft’s writings center on keeping the oral traditions alive. Her preservation of Ojibwe stories became particularly important as interaction with whites increased.

Schoolcraft was also heavily influenced by Euro-American literary conventions, as evidenced in her poem “Lines Written under Severe Pain and Sickness.” One of her main values as a writer was her ability to use her considerable literary skills in English to depict with accuracy and empathy the traditional lore of the Ojibwe. Romantic tones, which paralleled those of Anglo-American and British writers, are popular in her work. Her writing, however, does have a style of its own.

Family is an important aspect of the Ojibwe tales that Schoolcraft retold. Because most of its history is oral, stories were a way to pass on ideas important to the Ojibwe. Two of her most well-known tales, “Mishosha, or the Magician and his Daughters” and “The Forsaken Brother,” show what happens when a family stays together, and the consequences that arise when it does not.

Schoolcraft constructed “Mishosha” as a legend that questions the relationship between man and landscape while utilizing ties to the Great Spirit. “The Forsaken Brother” exemplifies a combination of what Jane learned from her mother and father. First printed in The Literary Voyager on February 13, 1827, it is a classic tale of respecting one’s family.

Schoolcraft had suffered consistent illnesses after the births of her children, and her health grew worse as the years went by. She eventually moved to live with her sister in Dundas, Ontario. By the time of her death, she had produced a large body of literary and other writings.

Jane Johnston Schoolcraft died suddenly on May 22, 1842 in Ontario at the young age of 42. It has been said that her death was caused by, in addition to illness, a combination of her distaste for white society overtaking her culture and an addiction to laudanum, a powerful opiate used to soothe her pain.

Subsequently, Henry Schoolcraft lost his job as Indian agent and moved back to the East, where he continued to write and publish works on American Indians. In 1847, Henry was married to a white woman from the South, Mary Howard. Jane’s surviving children were so upset by their father’s second marriage that they alienated themselves from him and their stepmother.

Jane Schoolcraft’s stories became a key source for Henry Wadsworth Longfellow‘s sensational bestseller The Song of Hiawatha (1855). The line “by the shores of Gitchee Goomee” refers to Lake Superior near Sault Sainte Marie, where Jane spent most of her life.

Her written accounts of Ojibwe stories have been published in several anthologies, including The Women’s Great Lakes Reader (2000), Native American Women’s Writing: c. 1800-1924, An Anthology, (2000) and The Heath Anthology of American Literature, Volume I (1994).

Published in 2007 by the University of Pennsylvania Press and edited by Robert Dale Parker, The Sound the Stars Make Rushing Through the Sky offers an edited and annotated collection of Schoolcraft’s writings for the first time, together with a cultural history, biography and literary critical introduction.

It was a fine summer evening; the sun was scarcely an hour high – its departing rays beamed through the foliage of the tall, stately elms that skirted the little green knoll, on which a solitary Indian lodge stood. The deep silence that reigned in this sequestered and romantic spot seemed to most of the inmates of that lonely hut like the long sleep of death that was now evidently fast sealing the eyes of the head of this poor family.

The door of the lodge was thrown open to admit the refreshing breeze of the lake, on the banks of which it stood; and as the cool air fanned the head of the poor man, he felt a momentary return of strength, and raising himself a little, he thus addressed his weeping family.

“I leave you – thou, who hast been my partner in life, but you will not stay long to suffer in this world. But oh! my children, my poor children! you have just commenced life, and mark me, unkindness and ingratitude, and every wickedness is in the scene before you. I left my kindred and my tribe, because I found what I have just warned you of: I have contented myself with the company of your mother and yourselves, for many years, and you will find my motives for separating from the haunts of men were solicitude and anxiety to preserve you from the bad examples you would inevitably have followed.”

Jane Johnston Schoolcraft was inducted into the Michigan Women’s Hall of Fame in October 2008.