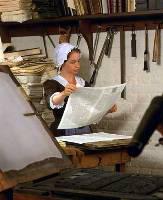 Hannah Bunce married Ebenezer Watson, second publisher of the Connecticut Courant, which soon became a vehement advocate of the patriot cause and the most important pro-revolutionary voice in the colonies. The newspaper supplied battle descriptions from all of the colonies, analyses of significant events, and news of British events and criticisms of Parliament, while also calling for support and economic sacrifice from the colonists.

In December 1777 the young owner/publisher Ebenezer Watson took ill and died unexpectedly of smallpox. His widow Hannah, already burdened with the care of five children under the age of seven and an estate to settle, was 27 years old and had little or no training in publishing.

Nevertheless, Hannah Watson took over operation of the newspaper, making her one of the earliest female publishers in the United States. In desperation, she took on a partner George Goodwin – who at age 20 was already a twelve-year veteran of the Courant. Watson kept the paper on its regular publishing schedule for 16 months during the Revolutionary War.

Within a month disaster struck: Tory supporters (American colonists loyal to England) set fire to the mill that provided printing paper to the Courant and writing paper to the state of Connecticut. The paper mill had been co-owned by Ebenezer Watson and Sarah Ledyard, widow of Ebenezer’s old partner, but until her husband’s estate was settled, Hannah could do nothing.

Hannah Watson announced the imminent demise of the Courant, its last issue to be printed on February 3, 1778. Then in a last-ditch effort, Watson and Ledyard petitioned the Connecticut Assembly for financial assistance in rebuilding the mill. Within hours, the Assembly authorized the establishment of a state-wide lottery to rescue the paper. The lottery was a success and the mill was rebuilt.

The Connecticut Courant never missed an issue, and under Watson’s leadership the newspaper (it became a daily paper in 1837 and was renamed the Hartford Courant) was financially successful and maintained a patriotic editorial policy.

On February 11, 1779, Hannah Watson married her next-door neighbor, successful businessman Barzillai Hudson. Eventually Hannah turned over her publishing duties to her new husband and retired to private life to raise her children.

Hannah Watson died on September 27, 1807, and was buried in the Old South Burying Ground in Hartford.

Hannah and her husband are buried beside each other in the Old South Burying Ground in Hartford, and Hannah has a sandstone monument with an ornamental cameo urn and willow carving that is typical of the period and the only one remaining in the cemetery today.