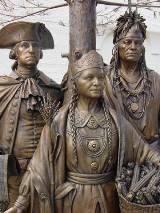 Polly Cooper was an Oneida woman who took part in an expedition to aid the Continental Army during the American Revolution at Valley Forge, Pennsylvania during the bitterly cold winter of 1777-78. Cooper has long been held up as an example of the courage, generosity and indomitable spirit of the Oneida people.

Image: George Washington, Polly Cooper and Chief Skenandoah at the National Museum of the American Indian in Washington, DC

When the Revolution began, the Oneidas decided to fight side by side with the Americans, thus becoming the young country’s first ally. In the summer of 1777, a pary of Oneidas fought at the Battle of Oriskany, a significant engagement in the Saratoga campaign. The Oneidas help General Nicholas Herkimer and his 800 Tryon County militiamen stop the British forces, preventing them from entering the Mohawk Valley and marching east along the valley to Albany.

Valley Forge
Though several locations were proposed, General George Washington selected Valley Forge, Pennsylvania to quarter his troops for the winter. It was 25 miles northwest of Philadelphia and close enough to the British to keep their raiding and foraging parties out of the interior of Pennsylvania, yet far enough away to halt the threat of British surprise attacks. The high ground of Mount Joy and the adjoining elevated ground of Mount Misery, combined with the Schuylkill River to the north, made the area easily defensible.

On December 19, 1777 Washington’s poorly fed, ill-equipped army, weary from long marches, staggered into Valley Forge. Winds blew fiercely as the 12,000 Continentals prepared for winter’s fury. Only about one-third of them had shoes, evidenced by bloody footprints along the march.

Undernourished and poorly clothed, living in crowded, damp quarters, the army was ravaged by sickness and disease. Typhoid, jaundice, dysentery and pheumonia killed 2,500 men that winter. Although Washington repeatedly petitioned for relief, the Continental Congress was unable to provide it, and the soldiers continued to suffer.

To see the men without clothes to cover their nakedness, without blankets to lie upon, without shoes… without a house or hut to cover them until those could be built, and submitting without a murmur, is a proof of patience and obedience which, in my opinion, can scarcely be paralleled.”

The Oneida Nation received word of Washington and his starving soldiers at Valley Forge. The Oneidas had experienced a very bountiful harvest and had an excess of corn and other foods they could share. Oneida Chief Skenandoah (aka Oskanondohna) sent an expedition of 40 warriors and one woman to accompany them. Her name was Polly Cooper.

The expedition traveled hundreds of miles from central New York through the cold and snow to deliver 600 baskets of corn to the starving army. The corn they brought was white corn and quite different from the yellow version that can be prepared simply. The variety of white corn grown by the Oneida people requires extended preparation before it can be eaten.

But the American soldiers were desperate for food when Polly Cooper and her fellow Oneidas arrived, and they tried to eat the corn uncooked. The Oneidas stopped the soldiers, knowing that if they ate the raw corn it would swell up in their stomachs and kill them. Polly Cooper taught the soldiers the preparation process and the lengthy cooking time the corn needed to be ready for human consumption.

Upon seeing the many needs of the army, Polly decided not to accompany the warriors when they departed for their homeland. She remained to help nurse the sick and to pass on her knowledge of medicinal plants and foods. Most importantly, she showed the soldiers and their wives how to make soup from hulled corn that was very nutritous, and an essential part of the Oneida diet.

Polly Cooper’s Shawl
For all these services she refused any pay. According to legend, the army wives went to town to shop one day, and took Polly with them. She admired the clothing but bought nothing. The wives noticed her particular interest in a beautiful black shawl. With the help of their husbands, the women bought the shawl and presented it to a surprised and grateful Polly.

That shawl has been handed down and cared for by successive descendants of Polly Cooper. Today, that shawl is considered a relic by the Oneidas – a treasure to be cherished as a symbol of the friendship between the Oneidas and the Americans that has endured for more than 200 years. Occasionally, it is displayed by the Oneida Indian Nation to remind everyone who views it about the courage of a group of Oneidas and a woman named Polly Cooper.

In 2005, the Oneida County Historical Society formally recognized Polly Cooper’s contribution to the American cause during the Revolutionary War by inducting her into its Hall of Fame. She joined Oneida Chief Skenandoah, who was inducted in 2002. The recognition of Skenandoah and Polly Cooper stands as a tribute to the Oneida Nation and its people, and as a reminder of the contributions the Oneidas provided during our country’s fight against tyranny and injustice in their quest for freedom.