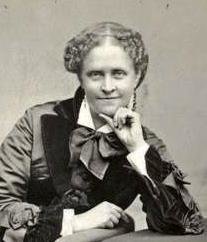 Helen Hunt Jackson (1830–1885) was a poet, novelist and essayist who became an advocate for Native American rights, fighting for improved treatment of Natives by the US government. She detailed the adverse effects of previous actions taken against Indian tribes in her history A Century of Dishonor (1881). Her novel Ramona dramatized the in Southern California and attracted considerable attention to her cause.

Helen Maria Fiske was born October 18, 1830 in Amherst, Massachusetts, the daughter of Nathan Welby Fiske and Deborah Vinal Fiske, a writer. Nathan Fiske was professor of Language and Philosophy at Amherst College. Helen had a sister Anne and two brothers, both of whom died soon after birth.
Deborah Fiske died of tuberculosis in 1844 when Helen was fourteen. Nathan Fiske died in 1847 in Jerusalem while on a trip to the Holy Land, but he had provided for her education and had arranged for an aunt to care for her.

Helen attended the highly regarded Ipswich Female Seminary and the Abbott Institute, a boarding school run by Reverend J.S.C. Abbott in New York City, receiving an excellent education for the times. At Abbott, Helen was a classmate of one of America’s most distinguished poets Emily Dickinson, also from Amherst. The two remained close and corresponded for the rest of their lives, but few of their letters have survived.

Family
In 1852 at age 22, Helen married Edward Bissell Hunt, a captain in the U.S. Corps of Engineers. For the next 11 years, she and her husband followed the typically mobile life of a career military family. They had two sons, one of whom, Murray Hunt, died as an infant in 1854 of a brain disease.

The Civil War years were not kind to Helen and her family. In 1863 her husband was killed in an accident while experimenting with a one-man submarine he had invented. Her only surviving son, Horsford “Rennie” Hunt, died of diphtheria in 1865 at age nine.

In the winter of 1873-1874 on her doctor’s advice Helen visited Colorado Springs, Colorado in search of a cure for a respiratory ailment when she met a wealthy local banker and railroad executive William Sharpless Jackson. She married Jackson on October 22, 1875 and made Colorado her home. They had no children.

Literary Career
After losing all her family members, Helen took up residence in Newport, Rhode Island, where she and her husband had previously been stationed. After meeting Thomas Wentworth Higginson, a soldier, social reformer and author, Jackson decided to seriously pursue a writing career. With Higginson’s support, her initial literary efforts were devoted to children’s stories, travel sketches, poetry and essays under the pseudonyms “H.H.”

Helen Hunt Jackson became perhaps the most prolific woman writer of her era in the country. Many of her pieces appeared in the New York Independent, Nation, Atlantic and other periodicals. Her early work also included a volume of poetry, Verses (1870). Ralph Waldo Emerson admired her poetry and used several of her poems in his public readings. He included five of them in his anthology Parnassus.

From 1875 to 1877, Jackson published three novels, including Hetty’s Strange History and Mercy Philbrick’s Choice, in which Emily Dickinson was part-model for the heroine. In time, Jackson would produce more than 30 books and hundreds of articles. She most likely would have become better known without the pseudonyms, but popular convention of the time dictated that female writers conceal their true identity.

On a trip back east in 1879 Jackson attended a lecture in Boston by the Ponca Chief Standing Bear, who described the forcible removal of the Ponca Indians from their Nebraska reservation and transfer to the Quapaw Reservation in Indian Territory, where they suffered from disease, climate and poor supplies. This piqued her interest.

Jackson promised to help raise funds for the Ponca People so they could return to their homeland. She wrote a friend, “I have done now, I believe, the last of the things I have said I would never do. I have become what I have said a thousand times was the most odious thing in the world – a woman with a cause.”

Social Reform
Although Jackson continued her other writing, the Native Americans became her primary concern. Upset about the mistreatment of American Indians by government agents, Jackson started investigating and publicizing government misconduct, circulating petitions, raising money for lawsuits and writing letters to the New York Times, attempting to arouse public opinion on behalf of the Indians’ deteriorating condition.

She engaged in heated exchanges with federal officials over the injustices committed against American Indians. Among her special targets was US Secretary of Interior Carl Schurz, whom she once called “the most adroit liar I ever knew.” She exposed the government’s violation of treaties with the Indian tribes and documented the corruption of US Indian agents, military officers and settlers who encroached on and stole Indian lands. The book caused a national sensation.

Jackson’s political activism won the support of several newspaper editors who published her reports about broken treaties, dishonest deals and unfulfilled promises. Among them were William Hayes Ward of the New York Independent, Richard Watson Guilder of the Century Magazine and publisher Whitelaw Reid of the New York Daily Tribune.

In 1881 she wrote what she considered her most important book, A Century of Dishonor. She sent a copy of the book to each member of Congress with a quote from Benjamin Franklin printed in red on the cover: “Look upon your hands: they are stained with the blood of your relations.” The book condemned state and federal Indian policy, detailed the history of broken treaties and called for significant reform in government policy toward Native Americans.

The New York Times later wrote that she:

soon made enemies at Washington by her often unmeasured attacks, and while on general lines she did some good, her case was weakened by her inability, in some cases, to substantiate the charges she had made; hence many who were at first sympathetic fell away.

Jackson went to southern California for rest. Having been interested in the area’s mission and the Mission Indians on an earlier visit, she began an in-depth study. Under its original land grants, the Mexican government provided for resident Indians to continue to occupy the mission lands. After taking control of the territory in 1848, US policies led to their removal from mission lands.

In 1882 President Chester A. Arthur appointed Jackson, along with translator Abbott Kinney, Special Commissioner of Indian Affairs in 1882 – the first woman to hold that position. Her assignment was to visit the Mission Indians in Southern California, ascertain the location and condition of various bands, and determine what lands should be purchased for their use.

In 1883 Jackson and Kinney published their 56-page report, which recommended extensive government relief for the Mission Indians, including the purchase of new lands for reservations and the establishment of more Indian schools. Jackson’s call for “some atonement” for past neglect and injustice was not acted upon by government authorities.

I am going to write a novel, in which will be set forth some Indian experiences in a way to move people’s hearts. People will read a novel when they will not read serious books. If I could write a story that would do for the Indian one-hundredth part what Uncle Tom’s Cabin did for the Negro, I would be thankful the rest of my life.

Although Jackson started an outline in California, she began writing the novel in December 1883 in a New York hotel room, and completed it in about three months. Originally titled In The Name of the Law, she published it as Ramona (1884). The story features Ramona, an orphan girl who was half Indian and half Scots and her Indian husband Alessandro, and their struggles for land of their own.

Ramona dramatized the mistreatment of Indians in Southern California, although its popularity was based on its romantic and picturesque qualities rather than its political content. The characters were based on people known by Jackson and incidents which she had encountered. The book achieved rapid success among a wide audience and was popular for generations; it was estimated to have been reprinted 300 times.

A fall at her Colorado Springs home in June 1884 left Jackson with a severely fractured leg. However, she returned to California to visit friends and continue writing. While there, she was diagnosed with cancer, and never returned to Colorado.

Her last letter was written to President Grover Cleveland:

From my death bed I send you a message of heartfelt thanks for what you have already done for the Indians. I ask you to read my Century of Dishonor. I am dying happier for the belief I have that it is your hand that is destined to strike the first steady blow toward lifting this burden of infamy from our country and righting the wrongs of the Indian race.

Helen Hunt Jackson died of stomach cancer on August 12, 1885 in San Francisco, California. Her husband arranged for her burial on a one-acre plot on a high plateau overlooking Colorado Springs, Colorado. Her grave was later moved to Evergreen Cemetery in Colorado Springs. Her estate was valued at $12,642.

One year after her death the North American Review called Ramona “unquestionably the best novel yet produced by an American woman” and named it, along with Uncle Tom’s Cabin, one of two most ethical novels of the 19th century. Sixty years after its publication, 600,000 copies had been sold. There have been over 300 reissues to date and the book has never been out of print.

Helen was described as “the most brilliant, impetuous and thoroughly individual woman in her time.” She rose above personal tragedy and became one of the most successful writers of her day. She included as her friends, Ralph Waldo Emerson and Oliver Wendell Holmes. Through her dedication to Indian reform during the last five years of her life, she wrote herself into American history.

A portion of Jackson’s Colorado home has been reconstructed in the Colorado Springs Pioneers Museum and furnished with her possessions.

There are within the limits of the United States between two hundred and fifty and three hundred thousand Indians, exclusive of those in Alaska. The names of the different tribes and bands, as entered in the statistical table so the Indian Office Reports, number nearly three hundred.

One of the most careful estimates which have been made of their numbers and localities gives them as follows: In Minnesota and States east of the Mississippi, about 32,500; in Nebraska, Kansas, and the Indian Territory, 70,650; in the Territories of Dakota, Montana, Wyoming, and Idaho, 65,000; in Nevada and the Territories of Colorado, New Mexico, Utah, and Arizona, 84,000; and on the Pacific slope, 48,000.

Of these, 130,000 are self-supporting on their own reservations, receiving nothing from the Government except interest on their own moneys, or annuities granted them in consideration of the cession of their lands to the United States. …Of the remainder, 84,000 are partially supported by the Government – the interest money due them and their annuities, as provided by treaty, being inadequate to their subsistence on the reservations where they are confined….

There are about 55,000 who never visit an agency, over whom the Government does not pretend to have either control or care. These 55,000 subsist by hunting, fishing, on roots, nuts, berries, etc., and by begging and stealing; and this also seems to dispose of the accusation that the Indian will not “work for a living.” There remains a small portion, about 31,000, that are entirely subsisted by the Government.