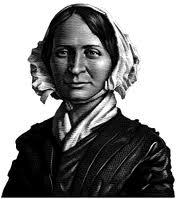 Mary Lyon (1797-1849) taught and managed schools in Massachusetts and New Hampshire before establishing Mount Holyoke Female Seminary (now Mount Holyoke College) in 1837, the first college for women in the United States. Within two years, she raised $15,000 to establish the school that became the model for institutions of higher education for women. Lyon firmly believed that women must be well educated to contribute significantly to society’s greater good, and endeavored to make her school affordable for students of modest means.

Childhood and Early Years
Mary Lyon was born February 28, 1797 on a farm near Buckland, Massachusetts. Her father Aaron Lyon, a veteran of the Revolutionary War, died when Mary was five, leaving her mother Jemina to raise seven children and manage a 100-acre farm on her own. At her mother’s side Mary learned the skills and crafts necessary for a New England farm girl.

In the early 19th century, most people felt that girls did not need to be educated to become wives, mothers and caretakers of the house. Mary began her education at the village school, about a mile from her home. When the school was moved farther away three years later, she left her family and lived for the school term with relatives and local families. She did chores to pay for her room and board.

Mary was thirteen when her mother remarried and moved into her new husband’s home, leaving Mary behind. Mary left school to keep the house for her brother Aaron, who took over the family farm. He paid his sister a weekly wage of one silver dollar. Mary had already received more schooling than most girls of her time.

In 1814, townspeople offered seventeen-year-old Mary Lyon her first teaching job at a summer school in nearby Shelburne Falls. At the time teachers needed no formal training, and her reputation as an excellent student years earlier was enough of a qualification. Female teachers were especially in demand because many men were moving west. The job paid 75 cents a week, far less than the $10 to $12 a month a male teacher received.

Mary’s modest beginnings fostered her life-long commitment to establishing educational opportunities for girls from middling and poor backgrounds. Although private female academies, often called seminaries, were springing up in New England, women of modest means could not afford the tuition. Moreover, they often taught only drawing and needlework, while male students studied geometry, science and Latin.

Despite the financial burden and a busy teaching schedule, Mary Lyon was determined to further her own education. She alternated time in the classroom and at lectures, sometimes traveling three days by carriage to enroll at a school. Against the advice of her family, Lyon paid for her education by cashing in a small inheritance from her father.

At age 20 Lyon began studying in earnest at Sanderson Academy in Ashfield, Massachusetts. There she studied mathematics, logic, speech, grammar and geography. She learned etiquette in the home of attorney Thomas White where she boarded. White’s daughter Amanda became Lyon’s lifelong friend, and in 1821 they went off to the Byfield Massachusetts Female Seminary together. By this time, having alternated between teaching and attending school at both Sanderson and Amherst Academy, Lyon was ready to devote herself to full-time study.

The experience at Byfield was intellectually rewarding. She forged close ties with Zilpah Grant, a faculty member who would later invite Lyon to become a teacher at the Ipswich Female Seminary where Grant would serve as principal. Lyon also underwent a religious conversion and joined the Congregational Church; religion, together with learning and family, thereafter played an important role in her life.

In 1824, Lyon established her own school, the Buckland Female Seminary. Lyon’s reputation as a gifted teacher spread, and over the next 20 years she taught at schools in Massachusetts and New Hampshire. During this time Lyon developed her educational philosophy and gained experience in managing a school. She worked to expand academic opportunities and to prepare young women to become teachers, one of the few professions open to them.

In 1833, Lyon embarked upon what was then considered a long journey, traveling to Philadelphia, Detroit, and western New York, where she was reunited with a brother she had not seen in many years. During her travels, Lyon stopped at various schools, including Emma Willard’s famous Troy Female Seminary. When she returned to Massachusetts, she was determined to open a new school.

Now 36, Lyon possessed an impressive resume. Though her Buckland Female Seminary had closed after her departure for Zilpah Grant’s Ipswich Academy, she continued her education by studying part-time at Amherst College. Both her education and teaching career were interrupted by typhoid fever in 1828 but, once recovered, she helped Zilpah Grant raise funds for the Ipswich Female Seminary.

In 1834 Lyon left her job as assistant principal at Ipswich Female Seminary to focus on establishing an institution of higher education for women. For the next three years, she crusaded tirelessly for funds and support. Even some of her staunchest supporters criticized her for traveling on her fundraising campaigns unaccompanied.

Mount Holyoke Female Seminary
During these years, Lyon developed her vision for Mount Holyoke Female Seminary, supervised the construction of the building, hired teachers and developed a curriculum equivalent to those at men’s colleges. She was especially influenced by Reverend Joseph Emerson (brother of Ralph Waldo Emerson) whose ‘Discourse on Female Education’ (1822) advocated that women should be trained to be teachers rather than “to please the other sex.” At the time, there were 120 colleges for men in the United States, but none for women.

Named for a mountain near South Hadley, Massachusetts, where the school was located, Mount Holyoke opened in 1837. Lyon strove to maintain high academic standards: she set rigorous entrance exams in English grammar, mathematics, U.S. history and geography, and admitted no students under the age of 16. In keeping with her social vision, she limited the tuition to $60/year, about one-third the tuition at Ipswich Female Seminary.

Due primarily to the financial panic of 1837, initially only 80 students enrolled, but a few months later there were over 100 girls, age 17 and above, in attendance. For students and teachers, the school day lasted more than 16 hours. To keep costs low, Lyon required students to perform domestic tasks – an early version of work study. She also paid her teachers relatively poorly. Though her policies were sometimes controversial, the seminary quickly attracted its target student body of 200.

Lyon anticipated a change in the role of women and equipped her pupils with an education that was comprehensive, rigorous and innovative, with particular emphasis on the sciences. She introduced women to learning science by performing laboratory experiments themselves. She required seven courses in the sciences and mathematics for graduation, a requirement unheard of at other female seminaries.

She invited distinguished scientists to give lectures, and inspired women to pursue careers in the sciences as college teachers and researchers. Mary Lyon herself taught chemistry. Her interest in the sciences and high expectations for women sparked a tradition of leadership in science education that continues to this day at Mount Holyoke College.

Mary Lyon was principal of the school she founded until her death 12 years later. Striving to give students an intellectual experience comparable to that of men’s colleges, Lyon included natural science, philosophy and economics in a constantly evolving curriculum. She urged early graduates to “Go where no one else will go. Do what no one else will do.”

Some of her students became missionaries, a calling Lyon praised in her book, A Missionary Offering, published in 1843. Two of her favorite nieces went off to the Far East as missionaries; their departure from South Hadley saddened Lyon, who had also lost her mother in 1840.

Poet Emily Dickinson entered Mount Holyoke in 1847, a decade after its founding. Writing her friend Abiah Root, Dickinson observed that the atmosphere at the seminary was congenial. “One thing is certain,” she wrote, “& that is, that Miss Lyon & all the teachers, seem to consult our comfort & happiness in everything they do & you know that is pleasant.”

Lyon lost a nephew to suicide in 1849. At the time of her nephew’s death, Lyon herself was ill with erysipelas, an infectious skin disease resulting in fever, chills and inflammation.

Mary Lyon died of erysipelas (possibly contracted from an ill student in her care) on March 5, 1849 at the age of 52. Her gravesite is on the college grounds, and her legacy is celebrated at her graveside during the annual Mount Holyoke College commencement ceremony and every year on her birthday.

Lyon’s passing saw the termination of a brilliant career and the end of the first phase of Mount Holyoke’s development. But, in accordance with her original plan, the school continued to prosper, for unlike earlier institutions with which she had been associated, Mount Holyoke was not dependent upon any one individual. It was a nonprofit corporation with a board of trustees who could ensure a smooth transition from one administration to the next.

Lyon was a person of uncommon talents. An extraordinarily effective teacher, she was warm, encouraging, and readily accessible to her students and the many visitors to Mount Holyoke; she was also a first-rate administrator who created the illusion that the operation of the seminary was effortless. In reality, careful planning and strenuous efforts characterized her undertakings, setting a supreme example for those who followed her at Mount Holyoke.

Mary Lyon proved that women were as intellectually capable as men, and that an institution for women offering a college curriculum could survive financially. Her impact on education was felt across the United States and in distant corners of the world. Graduates of Mount Holyoke Female Seminary carried Mary Lyon’s ideals and teaching methods to schools throught the United States and the world.

Mount Holyoke provided the inspiration, the model and often the leadership, for the many women’s colleges that followed. The school originally offered a three-year course of study. In 1861, it became a four-year institution and received a college charter from the Massachusetts State Legislature in 1888. Today, Mount Holyoke College remains at the forefront of higher education for women.