Indian Captive Taken as a Child in Texas 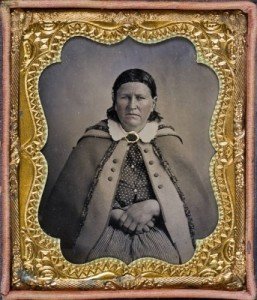 Cynthia Ann Parker (circa 1825-1870) was kidnapped and adopted by the Comanche at the age of nine, and lived with them for 24 years. She married chief Peta Nocona and had three children with him, including Quanah Parker. She was “rescued” at age 34, and spent the remaining years of her life refusing to adjust to life in white society.

Image: Cynthia Ann Parker after being
returned to the Parker family

Childhood
Cynthia Ann Parker was born circa 1825 to Lucy (Duty) and Silas Parker in Crawford County, Illinois. When she was nine years old, her paternal grandfather John Parker was recruited to settle his family in north-central Texas; he was to establish a fortified settlement against Comanche raids which had been devastating to the colonization of Texas and northern Mexico for generations.

As protection from the Native Americans of the area, the new settlers built a log fort with 12 foot walls around their community on the headwaters of the Navasota River. It was completed in March 1834, and became known as Fort Parker. Blockhouses were placed on two corners, and six cabins were attached to the inside walls. Most of the residents of the fort were part of the extended family of John and Sarah Parker.

On May 19, 1836, Fort Parker was attacked by several hundred Comanche, Caddo and Kiowa warriors, who killed men, women and children caught in the open and on the roads. The Indians attacked the fort and quickly overpowered the outnumbered defenders. Cynthia watched as the women were raped and killed, the babies smashed onto rocks, the adolescent boys murdered and the men tortured and killed.

During the raid the Comanches seized five captives, including Cynthia Ann Parker. Texans quickly mounted a rescue force. During their pursuit of the Indians one of the captives escaped. Within six years, the other captives had been returned to their white families, but Cynthia Ann remained with the Comanches for twenty-four years.

Although she was beaten and abused at first, she was soon integrated into the tribe. She was given to a Tenowish Comanche couple who raised her like their own daughter, and was totally devoted to her adopted parents. She was trained in Comanche ways, took the name Naduah (she carries herself with grace), and became fully integrated into Comanche society.

Marriage and Family
Cynthia Ann married Peta Nocona, a young chief who gained fame for his many violent raids on white settlements in the territory. While it was customary for prominent Comanche warriors to take several wives, Peta took no wife except Cynthia Ann – a mark of extraordinary devotion and honor. They had three children: sons Quanah and Pecos and daughter Topsannah.

Cynthia Ann Parker became the most famous white captive in the history of the Western frontier. Sightings of her over the years tantalized the public and kept alive relatives’ hopes she might one day be rescued. Indian agent Leonard Williams saw Cynthia Ann in 1846 and offered 12 mules and two mule loads of merchandise for her but stated the Indians “say they will die rather than give her up.”

Indian commissioners Pierce M. Butler and M.G. Lewis reported that either “from the influence of her husband or from her own inclination, she is unwilling to leave the people with whom she associates,” and that “she would run off and hide herself to avoid those who went to ransom her.”

But while Cynthia Ann may have been contented with her new life and family, the very thought she could happily exist as a Comanche “squaw” rankled white settlers on the Texas frontier. The fact the Indians could take a white woman and force her into “a fate worse than death,” and that she would not care to return to white society was incredible to them.

On November 27, 1860 Cynthia Ann, Chief Peta Nocona and his warriors entered Parker County, Texas, which was named after Cynthia Ann’s family. Almost everyone in Comanche society, including women and children, participated in the accompanying ceremonial dances. Women also helped manage the camps and carry away spoils.

Chief Nocona and his warriors carried out several raids on local white settlements, but it is not clear if Cynthia Ann knew the land belonged to her relatives. They attacked three ranches, stole over 300 horses and violated several women. When they were finished, Nocona and his band hid in a bluff near the Pease River.

Captain Lawrence Sullivan Ross of the Texas Rangers organized a posse of over 140 volunteers seeking revenge. On December 18, 1860, they tracked the natives to their hideout, surprised them and dominated them in the ensuing fight. There were few warriors left in the camp, and Cynthia Ann’s two sons escaped unharmed.

Cynthia Ann was trying to escape on horseback with her daughter Topsannah, but Ross captured her. It was a shock to discover that the woman dressed in deerskin and moccasins had blue eyes. The Rangers took their two captives to Camp Cooper, where Cynthia Ann tried to communicate with her captors using Comanche and some English.

This gave credence to the theory that she could be the Silas Parker’s daughter who had been kidnapped more than two decades ago. Captain Ross sent for her uncle, Isaac Parker, to see if he could identify her. When Cynthia overheard her name being used in the conversation, she patted herself on the chest and said, “Me Cincee Ann.” That admission clinched her fate.

For Cynthia Ann it was not a triumphal return. She pleaded to be allowed to return to her Comanche family, but her Uncle Isaac wanted to take her to live with his family at Birdsville. She agreed to go with her uncle on the condition that military interpreter Horace Jones would send along her sons if they were found.

While traveling through Fort Worth Cynthia Ann was photographed with her daughter Topsannah (Prairie Flower). In the picture Cynthia Ann’s hair was cut short – the Comanche sign of mourning. She thought that her husband Peta Nocona was dead and feared that she would never see her two sons again.

Cynthia Ann became a celebrity, but the fuss and ceremony only frightened her, and she had difficulty understanding the iconic status the nation had thrust upon her. There were many newspaper accounts of her return, all of which were obsessed with the idea that a white girl from a devout Baptist family had been transformed into a pagan savage.

A sympathetic Texas Legislature tried to compensate for her loss with a pension of $100 a year for five years and a league (about seven square miles) of land, but nothing could appease the grief she felt for leaving her husband and sons behind. She had been kidnapped and forced to live among people not of her choosing for the second time in her life.

Late Years
Cynthia Ann’s brother took responsibility for his sister and niece, moving them into his house, where Cynthia Ann eventually had to be locked up to prevent her from escaping. They stayed there until the Civil War began and he left to join the Confederate Army.

They then went to live with her sister, where Cynthia Ann led a productive life, learning to weave, spin wool and sew. Neighbors brought hides for her to tan, and she created home remedies from local plants and herbs. She learned to speak English again and was beginning to become literate.

However, Cynthia Ann was never fully reconciled to living in white society and never saw her Comanche family again. The time and place of Chief Peta Nocona’s death is in dispute, but she never saw her husband again. In 1863, she received word that her son Pecos had died of small pox. One year later, Topsannah died of pneumonia.

Cynthia Ann became desperate to be reunited with her son Quanah, but the Parker family refused to allow it. At least once she escaped, but was caught and brought back to Texas. This seemed to be the final blow for Cynthia Ann. She fell into a deep depression. Her despondency isolated her and she often refused to eat.

Cynthia Ann Parker Nocona died in 1870, never knowing that her oldest son, who called himself Quanah Parker, had become a chief of the Comanche tribe. Unusually tall and athletic for the usually diminutive Comanche, Quanah earned his reputation in a number of daring raids. His greatest victory came in 1871 when he outwitted a government force of 600 soldiers, successfully attacking their camp at night while leading an entire village to safety. 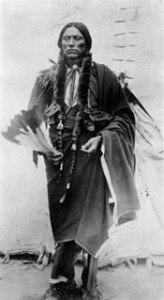 But by the mid-1870s life was becoming impossible for the nomadic Comanche, and in 1875 Quanah Parker, the last free roaming Comanche chief, surrendered at Fort Sill and was told that his mother had died five years earlier.

In his remaining years he enjoyed a certain celebrity and became a successful cattle rancher as the remains of the once proud Comanche empire collapsed around him.

In 1910 Quanah Parker moved his mother’s body to the Post Oak Cemetery near Cache, Oklahoma. When he died in 1911 he was buried next to his mother. Cynthia Ann and Quanah Parker’s remains were moved in 1957 to the Fort Sill Post Cemetery at Fort Sill, Oklahoma.