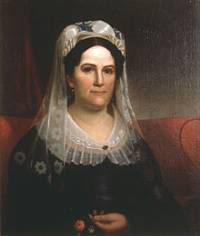 Rachel Donelson Jackson was the wife of Andrew Jackson, 7th President of the United States. As a child, Rachel was brought to the homes of Thomas Jefferson, Patrick Henry and Richard Henry Lee, all of whom were colleagues of her father in the House of Burgesses. Although she died before President Jackson took office, Rachel Jackson is considered an American First Lady.

Rachel Donelson was a child of the frontier. Born near present-day Chatham, Virginia in June 1767, she journeyed to the Tennessee wilderness with her parents when only 12. Her father Colonel John Donelson was a Revolutionary War soldier, member of the Virginia Assembly and co-founder of the new settlement of Fort Nashborough, later to be named Nashville, Tennessee.

They removed first to nearby Mansker’s Station, and then to Harrodsburg, Kentucky because of serious threats of attacks on white settlers by Cherokee and Chickasaw native peoples in the region. Her father was murdered in 1786 while returning from Virginia to Tennessee.

At age 17, while living in Kentucky, Rachel married Lewis Robards of Harrodsburg on March 1, 1785. His irrational fits of jealous rage made him difficult to live with. Rachel and Robards broke up and attempted reconciliation several times.

Andrew Jackson was born on March 15, 1767. His parents were Scots-Irish colonists Andrew and Elizabeth Hutchinson Jackson, who had emigrated from Ireland two years earlier.

In 1788 newly certified attorney Andrew Jackson traveled more than 300-miles from Salisbury, North Carolina, to a blockhouse recommended by friends in Fort Nashborough, where he lived as a boarder. The blockhouse was owned by the widow Donelson, Rachel’s mother.

In 1790 Rachel and Robards separated, after he accused her of having an affair with Andrew Jackson. This time Rachel returned to her mother’s home. Now living in the same compound, Rachel and Andrew became friends. Rachel later heard that Robards was filing for divorce.

The Donelsons and the Jacksons claimed that Robards had physically abused Rachel and that she ran first to her mother’s home and then – when word came that Robards was coming to take her back to Kentucky – fled to Natchez, Mississippi with friends, guided and protected by Jackson.

Believing that Robards had divorced her, Rachel married Andrew Jackson in 1791. However, the divorce had never been completed, making Rachel’s marriage to Jackson legally bigamous and therefore invalid. Later research shows that a friend of Lewis Robards had planted a fake article in his own newspaper, telling that the divorce had been finalized.

After two happy years Rachel learned that Robards had not obtained a divorce, only permission to file for one. Now Robards brought suit on grounds of adultery. After the divorce was granted (the first in Kentucky history), the Jacksons remarried on January 7, 1794. On the frontier it was not uncommon on the frontier for relationships to be formed and dissolved unofficially, as long as they were recognized by the community.

The Hermitage
Much of Rachel’s focus remained on the estate that would become part of her husband’s legend, the Hermitage. From a cotton farm with a log house near Nashville he bought in 1804, Andrew Jackson’s famous plantation evolved; from its earliest stages Rachel had a direct role in designing and then managing it.

The acreage, outbuildings, and main house, along with the slaves bought to maintain it, grew over the next two decades. By 1821, the Jackson home was an eight-room two-story brick mansion, which continued to grow, especially after Jackson became President. Thus, Rachel never knew the famous white-columned southern plantation that was to become the familiar vision of the Hermitage.

Through her husband’s public career in the military, business and politics, Rachel largely remained at the plantation, supervising the large number of slave families that carried out the household tasks, farming and maintenance of the vast acreage.

Andrew Jackson was a lawyer, circuit judge, land speculator, farmer and businessman. He later moved into politics, was a soldier of national renown, especially for his victory over the British at the Battle of New Orleans in 1815.

Rachel Jackson resented his frequent absences and their lengthy separations. In 1813, she wrote:

Do not, my beloved husband, let the love of country, fame and honor make you forget that you have me. Without you I would think them all empty shadows. You will say this is not the language of a patriot, but it is the language of a faithful wife, one I know you esteem and love.”

The scandal of her bigamy caused Rachel Jackson to withdraw from society’s glare. However, she joined her husband during his most important political endeavors in Pensacola, Florida; New Orleans, Louisiana and Washington, DC. She was in the capital for the House vote in the contested 1824 election and despite her smoking a long-stem clay pipe, she was befriended by the urbane First Lady Elizabeth Monroe.

Early in the 1828 presidential race, the story of Rachel Jackson’s former status as an adulterer, bigamist and divorcee was used against her husband by the press supporting his rival for the presidency, John Quincy Adams. One editorial asked, “Ought a convicted adulteress and her paramour husband to be placed in the highest offices of this free and Christian land?”

The controversy surrounding their marriage remained a sore point for Jackson, who deeply resented attacks on his wife’s honor. With his anger over attacks about Rachel, and his participation in violent confrontations, Jackson gained a reputation as a quarrelsome and vengeful man.

Such widespread exposure of Rachel’s personal life at a time when women considered such matters to be exclusively private created enormous shame for her; one historian recounted that she spent much of the campaign crying and depressed, which only further stressed a heart condition that had first manifested itself in 1825.

Rachel intended to attend the inauguration and had purchased a gown and white slippers for the traditional ball. Despite this, her physical and mental health had so drastically deteriorated that by the fall she had a near fatal heart attack.

Rachel Jackson seemed to recover but died suddenly on December 22, 1828 – two weeks after her husband’s victory in the election and two months before he took office as President. Andrew Jackson was inconsolable. He refused to believe she was actually dead and insisted that blankets be laid on her body in case she woke up and needed warmth.

Wearing the white dress she had purchased for her husband’s inaugural ceremonies, Rachel Donelson Jackson was buried in the garden at the Hermitage on Christmas Eve, 1828. Church bells tolled from one to two o’clock, the hour of her burial. According to newspaper accounts, some 10,000 people filled the city, not only from the area but also Jackson political supporters from around the country.

Jackson built a temple made of limestone resembling a Greek styled gazebo over her grave. According to his granddaughter, he visited Rachel’s grave every night at sunset. He hung her portrait at the foot of his bed so she would be the first thing he saw in the morning and the last thing he saw at night, and he once said, “Heaven will be no heaven for me if she is not there.”
Later he build a permanent .

Here lie the remains of Mrs. Rachel Jackson, wife of President Jackson, who died December 22nd 1828, aged 61. Her face was fair, her person pleasing, her temper amiable, and her heart kind. She delighted in relieving the wants of her fellow-creatures, and cultivated that divine pleasure by the most liberal and unpretending methods… A being so gentle and so virtuous, slander might wound but could not dishonor. Even death, when he tore her from the arms of her husband, could but transplant her to the bosom of her God.

The death of Rachel Jackson also became the headline subject of many national newspapers, used as a political news story rather than a private one. It attracted more attention than any obituaries of more famous presidential wives like Martha Washington, Abigail Adams or Dolley Madison had.

Although she died before President Jackson took office, Rachel Jackson is considered an American First Lady, and her memory had great political consequences during her husband’s two terms as U.S. president. At her funeral, Jackson had stated that he hoped he would have the “grace to enable me to forget or forgive my enemy who has ever maligned that blessed one…” He was unable to do so. He forever blamed John Quincy Adams and his supporters for her death.

Although the Jacksons had no children of their own, they had gladly opened their home to the children of Rachel’s many relatives. In 1809 they adopted a nephew and named him Andrew Jackson, Jr. Lyncoya was a Creek Indian orphan adopted by the Jacksons after the Creek War. Lyncoya died of tuberculosis in 1828, at the age of sixteen. They also acted as guardians for eight other children.

Another adopted nephew, Andrew Jackson Donelson, was the son of Rachel’s brother Samuel, who died in 1804. ‘A.J.’ later married his cousin Emily, one of Rachel’s favorite nieces. When Jackson was elected President, he planned to have young Andrew Donelson as his private secretary, and Emily as a companion for Rachel. 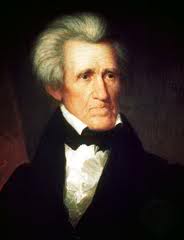 After losing his beloved wife President Jackson asked Emily Donelson to serve as his hostess. Though only 21 when she entered the White House, she skillfully cared for her uncle, her husband, four children (three born at the mansion), many visiting relatives and official guests.

Praised by contemporaries for her wonderful tact, she had the courage to differ with the President on issues of principle. Frail throughout her lifetime, Emily died of tuberculosis in 1836. During the last months of the administration, Sarah Yorke Jackson, wife of Andrew Jackson, Jr. presided at the White House in her stead.

Jackson was one of the more sickly presidents, suffering from chronic headaches, abdominal pains, and a hacking cough caused by a musket ball in his lung that was never removed, often causing him to cough up blood and sometimes made his whole body shake.

After serving two presidential terms, Andrew Jackson returned to the Hermitage, where he enjoyed eight years of retirement. He continued to be influential in politics, and remained a firm advocate of the federal union of the states, rejecting any talk of secession. “I will die with the Union,” he always insisted.

He never recovered from the loss of his beloved wife, and always carried a miniature of her and at night placed it on his bedside table.

Andrew Jackson died June 8, 1845 at the age of 78, of chronic tuberculosis, dropsy and heart failure. He was buried beside Rachel in the garden at the Hermitage.