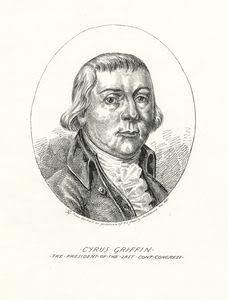 Cyrus Griffin (1749 – 1810) was a lawyer and judge who served as the last President of the Continental Congress, holding office from January 22, 1788, to November 2, 1788. After the ratification of the new United States Constitution rendered the old Congress obsolete, he became a Federal judge.

Lady Christina Stuart was born in 1751 in Peebleshire, Scotland. Cyrus Griffin was born July 16, 1748 in Farnham, Virginia, the son of Leroy and Mary Ann Bertrand Griffin. Griffin studied law at the Temple in London and the University of Edinburgh in Scotland, where he became close friends with Charles Stuart, Lord Linton, first son and heir of the Earl of Traquair. During the Christmas holiday, Charles invited him to his family’s estate.

John Stuart, the sixth Earl of Traquair had three daughters, Lady Christina, Lady Mary and Lady Louisa. The Earl of Traquair was a formal man, whose family had a line of nobility stretching back before Columbus discovered America, and he was determined to wed Lady Christina to a a nobleman of fame and fortune who would enhance his social standing.

Lady Christina was strikingly beautiful and her personality so magnetic that Griffin could not resist her, and during the holidays, the couple secretly courted. Lady Christina also knew that if their courtship was discovered, Griffin would be asked to leave Traquair.

None of this dissuaded the young Virginian from falling in love. After he won Christina’s heart, Griffin believed that the Stuart family would accept his own noble lineage once he expressed to them how deeply in love he was with their daughter. However, the Earl was furious at the news and admonished his son for allowing this Virginian to enter Traquair’s gates.

The Earl reportedly raved and ranted at the rest of his family, for not uncovering this sooner because such a scandal threatened the social standing of his noble house. Griffin was immediately escorted off the estate and the Earl forbade Christina to ever see Griffin again, doing everything in his power to end the love affair.

The courtship, however, did not end but became an elopement months later through the forests and hills of Scotland in a wild flight from Traquair on a spring day in 1770. In the escape, Lady Christina fell and broke her ankle. Family legend has it that Cyrus, determined not to let the event spoil their plans, carried his lover through the countryside to a parson. Despite their disheveled appearance and her swollen ankle, Lady Christina married Griffin on April 29, 1770.

The Griffin marriage blossomed and one year later Lady Christina bore her first child, John on April 20, 1771. Due to her estrangement from her family and Griffin’s meager allowance the young couple struggled through the rest of Griffin’s legal education in London. Soon after the birth of their first son John they came to America, and Lady Christina never revisited her native land.

Children of Judge Griffin and Lady Christina were: John who became a judge of the Indiana Superior Court; Mary who married her cousin, Thomas Griffin of Yorktown; Louisa who married Hugh Mercer; Cyrus died ca. 1787; and Samuel who married Sally Lewis of Gloucester County.

In September of 1779 Cyrus Griffin handled financial matters concerning his late father-in-law, John Stuart, through Benjamin Franklin. Stuart had reconciled with his daughter in America via correspondence shortly before his death.

Griffin served as President of Congress from January to November 1788, a mostly ceremonial position with no real authority. He was the fourth of the fourteen Presidents of the Continental Congress – along with Henry Laurens, John Jay and Elias Boudinot – who could trace their heritage to the French Huguenots who fled the Protestant persecution that culminated in King Louis XIV’s revocation of the Edict of Nantes in 1685.

In Philadelphia and New York while he served in the Congress, Judge Griffin and Lady Christina attended assembly balls and entertained at weekly dinner parties for twenty or more guests. Griffin was president of the Supreme Court of the Admiralty from its creation until its abolition, and was commissioner to the Creek Nation in 1789.

In addition to his congressional and executive duties, Cyrus devoted much of his public career to the law. In 1780, he was selected by his colleagues to serve on the Court of Appeals in Cases of Capture, the nation’s first independent judiciary. In 1790, he was appointed by President George Washington as the first Federal Judge for the District of Virginia, where he served until his death. In that capacity, he joined Chief Justice John Marshall in presiding over the treason trial of Vice President Aaron Burr.

Judge Griffin and Lady Christina lived in Williamsburg, Virginia, from 1794 until their deaths.

Cyrus Griffin died at Yorktown, Virginia, on December 14, 1810. He is buried next to his wife in the churchyard at Bruton Parish Church.

The following obituary notice appeared after his death:

Died, on Friday 14th December, at York, the Hon. Cyrus Griffin, Judge of the United States Court for the District of Virginia. He was a gentleman highly respected for his eminent virtues, his integrity and independence. He has filled many public appointments, and always with honor to himself, and with advantage to the country.

Griffin was noted for devotion to his family and for steadfastness in friendship. In his Republican Court, Rufus W. Griswold speaks of Griffin as being ” conspicuous for his devotion to American liberty; and few men from Virginia shared more largely the respect and confidence of Washington.”

Cyrus Griffin remains unacknowledged in Bruton Parish Churchyard in Williamsburg beside the Table Tomb he so lovingly commissioned for his dear wife. There, in an unmarked grave, buried “at the smallest expense possible in every respect,” according to the dictate of his will, Cyrus Griffin’s remains have been interred in obscurity for two centuries. Of all the Founding Fathers, he is surely the most forgotten.