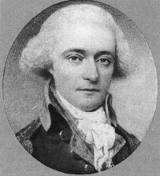 Mary Middleton was born in 1750, the daughter of Thomas Middleton, South Carolina planter and slave importer. Mary’s uncle Arthur Middleton was a signer of the Declaration of Independence. Mary’s grandmother Mary Brandford Bull willed her holdings, including Toogoodoo Plantation, to her four granddaughters. Three of the granddaughters died soon after receiving their inheritance and Bull’s vast fortune was all transferred to Mary.

Pierce Butler was born in Ireland on July 11, 1744, and came to America in 1768 as an officer in the British Army. He was a major in the 29th Regiment, which was sent to Boston in 1768 in an effort to suppress the growing colonial resistance against Britain. A detachment from his unit fired the shots during the Boston Massacre on March 5, 1770, in which British redcoats killed five civilian men, thereby intensifying the confrontation between the colonies and England.

On January 10, 1771, Mary Middleton married Pierce Butler, and they had eight children, three of whom died young. Butler inherited Mary’s plantations and slaves – women were not allowed to own property at that time – and began a new life as a southern planter in South Carolina.

When the 29th Regiment received orders to return to Great Britain in 1773, Butler sold his army commission and purchased a plantation in the coastal region of South Carolina, adapting to the lifestyle of a southern planter, eventually owning more than 10,000 acres. He also began to accumulate a small fleet of coastal vessels to support his expanding business ventures.

Pierce Butler began his public service in 1776 when he was elected to the South Carolina legislature, a post he held for 13 years. When the Revolutionary War began in 1775, he joined several other former British officers (including future generals Horatio Gates, Charles Lee and Richard Montgomery) in supporting the American cause. The success of his business interests as well as the important role played by the Middleton family in the Patriot movement in South Carolina clearly influenced his decision.

By 1778 the King and his ministers found that their forces in the northern and middle states had reached a stalemate with General George Washington‘s continentals, now more adequately supplied and better trained after Valley Forge. In response, they adopted a “southern strategy,” assuming that the many Loyalists in the southern states would rally to the Crown if supported by regular troops.

Although he did not assume an active combat role, he offered his military talents to his state, and in early 1779 Governor John Rutledge turned to the former Redcoat to help reorganize South Carolina’s defenses. Butler assumed the post of the state’s adjutant general, a position that carried the rank of brigadier general, although he continued to prefer to be addressed as major, his highest combat rank.

In 1780 the British captured Charleston, and with it most of South Carolina’s civil government and military forces. During the next two years Butler employed his military talents in developing a counterstrategy to defeat the enemy’s southern operations. He and his fellow South Carolinians, along with their neighbors in occupied portions of Georgia and North Carolina, refused to submit to Britain’s demand that they surrender.

Instead, they organized a resistance movement. Butler, as adjutant general, worked with former members of the militia and Continental Army veterans such as General Francis Marion and General Thomas Sumter to integrate their various partisan efforts into a unified campaign, in conjunction with the operations of the Southern Army under the command of Horatio Gates and later General Nathanael Greene.

These partisan tactics involved considerable expense and personal risk for Butler who, as a former Royal officer, remained a target for the British occupation forces. Several times he barely avoided capture. Once, he escaped by sneaking from his home dressed only in his nightshirt. Throughout the closing phases of the southern campaign Butler personally contributed cash and supplies to help sustain the American forces.

Butler lost his estates and fortune during the British occupation of South Carolina in the early 1780s. Military operations in the latter months of the Revolution left Butler a poor man. Many of his plantations and ships were destroyed, and the international trade on which the majority of his income depended was in shambles. When the war ended he traveled to Europe in an effort to secure loans and establish new markets.

In 1787 South Carolina sent four delegates to the Constitutional Convention in Philadelphia: John Rutledge, Charles Pinckney, Charles Cotesworth Pinckney and Pierce Butler. The delegates decided to form a new government that had three branches – legislative, judicial, and executive – based on the so-called Virginia Plan written by James Madison.

At the Convention he attracted attention in his powdered wig and his coat trimmed in gold lace – and his readiness to remind the gathering of his noble birth. The nationalists welcomed him, however, as he was a fervent supporter of strong government and a key figure in the nationalist caucus.

Butler was a vocal spokesman for Southern slaveholders, and objected to any point in which he thought the representatives of the northern states were trying to get the best of their Southern colleagues. He urged that the number of representatives a state had in Congress should be based on wealth, claiming that “money is power.” He also proposed the wording in the Constitution that slaves escaping to another state would be returned to their owners.

Butler’s experiences as a soldier and planter influenced his forceful support for a strong union of the states at the Convention. As a military leader during the campaigns in the south he had come to appreciate the need for a national approach to defense. As a merchant, he understood that economic growth depended upon a strong central government. At the same time, he energetically supported the special interests of his region.

This dual emphasis on national and state concerns puzzled his fellow delegates, just as other apparent inconsistencies would bother associates throughout the rest of his political career. Always an advocate of the rights of the common man during the debate over the Constitution, Butler was also a large planter and among the political and social elite of the Southern colonies.

After signing the Constitution, Butler was elected as one of South Carolina’s first United States Senators. Butler suggested that there should be an increase in pay for Senators, because “a member of the Senate should not only have a handsome income, but should spend it all.”

Following his wife’s death, Butler sold off the last of their South Carolina properties and moved only the young strong slaves to the Sea Islands of Georgia. He had purchased 1,700 acres on the northern end of St. Simons Island in 1774. With the interruption of the Revolution, he did not begin to settle the properties until 1793.

By 1793 Pierce Butler was the absentee master of a personal empire that enabled him to purchase two homes near his daughter in Philadelphia, and live in palatial comfort for the rest of his life. He owned 500 enslaved African Americans, who worked on his 300 acre rice plantation at Butler Island and 800 acre cotton plantation at St. Simons Island; he also owned property at Woodville on the mainland.

Butler later established an estate he named Hampton Plantation on St. Simons Island, where he grew hundreds of acres of Sea Island cotton. After several years, the complex included the main house with kitchen, an overseer’s house, a smokehouse, a hospital, a stable, duplex slave cabins and numerous other outbuildings. By 1813 the main house had ten rooms on the ground floor with seven chimneys and possibly a second floor. This house, Butler’s only home in Georgia, was destroyed by a hurricane in 1824.

He is said to have run his plantations like a military institution. He did not permit them to associate with slaves from other plantations, nor did he allow them to attend church services for the island slaves on Sunday afternoon. The slaves at Hampton would eventually number almost a thousand, and the plantation would be recognized as one of the largest in the South.

As an absentee landlord, Butler had to depend heavily on his overseers, but the capable men he chose, together with his acute business sense, made Hampton an extremely profitable cotton plantation. The profits were as high as $50,000 per year – far above the norm. Butler attempted to sell his Georgia holdings beginning in 1809, but found no buyers who would meet his price.

Although an infrequent visitor himself, Butler often extended the hospitality of Hampton to his friends. One of his most famous guests was Vice President Aaron Burr, who after killing Alexander Hamilton in a duel, sought refuge in the South where dueling was understood, if not tolerated. Burr had served with Butler in the Senate and took advantage of his friend’s invitation, staying at Hampton for a month in 1804.

Butler served three terms in the United States Senate, but his service was marked by several abrupt changes in political party. Beginning as a Federalist, he switched to the Jeffersonian party in 1795, only to become an independent in 1804. These changes confused the voters of his state, who rejected his subsequent bids for high public office, although they did elect him three more times to the state legislature as an easterner who spoke on behalf of the west.

Butler retired from politics in 1805 and spent much of his time at his summer home in Philadelphia. He continued his business ventures, becoming one of the wealthiest men in America, with huge land holdings in several states. Like other Founding Fathers from his region, Butler also continued to support the institution of slavery. But unlike George Washington or Thomas Jefferson, Butler never acknowledged the inconsistency of defending the rights of the poor while supporting slavery.

In his later years, Butler lived to Philadelphia near his daughter Sarah Butler Mease, who had married a local physician. He was described as “a handsome widower… maintaining an elegant establishment in Philadelphia who affected to be a democrat and carefully selected his associates from the aristocracy; a South Carolinian with a reverence for wealth.”

Pierce Butler died February 15, 1822, in Philadelphia, at the age of 77 and was buried at Christ Churchyard there.

Butler’s will cut some children out altogether. He left Hampton Plantation to his daughter Sarah, to be divided among her three sons with the stipulation they change their surnames to Butler – two did, Pierce and John. In 1838 they inherited Hampton, including 730 slaves, making them two of the richest men in America.