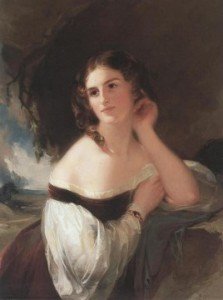 Fanny Kemble (1809-1893) was a famous British actress prior to her marriage to slaveholder Pierce Mease Butler, grandson of Founding Father Pierce Butler. She was an independent and highly intelligent woman who set out on a two-year theatrical tour in America in 1832. Kemble had no idea how much her life would be affected by the institution of slavery.

Frances Anne Kemble was born on November 27, 1809, in London, England. From one of England’s most prominent family of actors, her aunt was noted actress Sarah Siddons and her father, Charles Kemble, the renowned Shakespearean actor. Due to the financial trouble of her father’s Covent Garden Theatre in London, Fanny began acting to support her family, making her theatrical debut as Juliet at age 19. Her attractive personality made her a great favorite, enabling her father to recoup his losses as a manager.

Though a brilliant actress, Fanny’s first love was writing. Throughout her life she would be a prolific and accomplished writer of plays, journals, poetry, letters and memoirs. She also spoke French fluently, read widely, was an accomplished musician, and had a passion for vigorous exercise, especially horseback riding.

In 1832, Fanny set out on a two-year theatrical tour in America, where she was received with great enthusiasm up and down the East Coast. She was so popular that men followed her from city to city. The most devoted of these was Pierce Mease Butler, grandson of Founding Father and Revolutionary War veteran Major Pierce Butler.

Pierce Butler joined the Kemble family on their vacation and showered Fanny with lavish gifts, his perseverance paid off when Fanny finally accepted his proposal. They were married in 1834 in Philadelphia. By marrying Butler, Fanny escaped the life of the theater and her family’s precarious finances and embarked on a life of wealth.

The Butler marriage began to deteriorate during the first year due to a variety of reasons, one of them Butler’s infidelities. He had numerous affairs with many different women, and was said to be living with a slave woman while visiting his Georgia plantations without Fanny. The couple also had differing views on woman’s place in society – Butler believed in submission while Fanny supported equal rights for women.

When the couple married, he was not a slaveholder, but by the time their daughters Sarah (1835) and Frances (1838) were born, Butler had inherited his grandfather’s mansion in Philadelphia and a nearby country home and two Sea Island plantations in Georgia: a cotton plantation on St. Simons Island and a rice plantation on nearby Butler Island and the 638 slaves who worked them. A rift soon developed between Butler, the slave owner, and Fanny, the abolitionist.

Butler decided to take his wife to visit his Georgia plantations, thinking he could convince Fanny of the benefits of slavery. Fanny agreed to go with her husband, hoping she could persuade him to emancipate his slaves. They were both sadly mistaken. In December 1838 Fanny accompanied her husband and their two young daughters to Georgia.

Her first encounter with her husband’s slaves is captured in her journal:

We now approached the low, reedy banks of Butler Island, and passed the rice miff and buildings surrounding it, all of which, it being Sunday, were closed. As we neared the bank, the steersman took up a huge conch, and in the barbaric fashion of early times in the Highlands, sounded out our approach. A pretty schooner, which carries the produce of the estate to Charleston and Savannah, lay alongside the wharf, which began to be crowded with Negroes, jumping, dancing, shouting, laughing and clapping their hands (a usual expression of delight with savages and children), and using the most extravagant and ludicrous gesticulations to express their ecstasy at our arrival.

On our landing from the boat, the crowd thronged about us like a swarm of bees; we were seized, pulled, pushed, carried, dragged, and all but lifted in the air by the clamorous multitude. I was afraid my children would be smothered. Fortunately Mr. O–, the overseer, and the captain of the little craft above-mentioned, came to our assistance, and by their good offices the babies and nurse were protected through the crowd.

They seized our clothes, kissed them – then our hands, and almost wrung them off. One tall, gaunt Negress flew to us, parting the throng on either side, and embraced us in her arms. I believe I was almost frightened; and it was not until we were safely housed, and the door shut upon our riotous escort, that we indulged in a fit of laughing, quite as full, on my part, of nervousness as of amusement.

Fanny spent four months on Butler and St. Simons Islands, and her diary became an impassioned eyewitness account of the wrongs of slavery. The slaves were fascinated by her and often came in groups to watch her write. During this period, Fanny threatened to leave Butler if their livelihood continued to be based on slavery. In retaliation, Butler wrote to many of her friends claiming that her mental illness was frightening him.

By the time the Butlers returned to Philadelphia, their marriage was in turmoil. Pierce prevented Fanny from resuming her writing and acting careers, and used their children as weapons in his marital battles with Fanny. He hired a governess named Miss Hall, and gave her complete control over the children.

Fanny compiled her diary and the letters she had written to friends about slavery into a book entitled Journal of a Residence on a Georgian Plantation, but received a great deal of pressure from the Butler family not to publish the journal. Butler himself tried to edit her journal, then went so far as to offer her publisher $2,500 not to publish the book.

In 1845, after a series of separations, Fanny gave up her attempts at reconciliation and left her husband and children. She spent the next two years attempting to reestablish her stage career in England. Her efforts at acting failed miserably, but she achieved great success by performing dramatic readings of Shakespeare’s works.

In 1848, Pierce filed for divorce claiming that Fanny had “willfully, maliciously, and without due cause deserted him” in 1845. Fanny at first denied the desertion, then stated that if desertion had occurred, that it was justified by Butler’s insulting treatment.

After a long and painful court proceeding, the divorce was finally granted in September 1849, but Butler insisted on maintaining custody of their two daughters until they turned 21. Fanny was granted the mortgage to Butler Place (the country home near Philadelphia), $1500 a year in alimony and two months every summer with her daughters. Fanny took back her maiden name and returned to England.

The Weeping Time
After the divorce, Butler fell into economic ruin as he squandered away his vast fortune in gambling and stock market speculation – a rumored loss of $700,000. By 1856 his situation had become so severe that the management of his finances was handed over to three trustees. To satisfy his enormous debt, they began by selling the once-grand, now-neglected Philadelphia mansion for $30,000 and liquidating other properties. But that was not enough to satisfy creditors, much less to ensure that Butler would continue to live in luxury.

In February 1859, the trustees traveled to Georgia to appraise Pierce Butler’s slaves. Each person was examined and his or her value assessed. Some 436 African American men, women and children were boarded onto railway cars and steamboats and brought to a racetrack in Savannah, Georgia. The event was the largest sale of human beings in the history in the United States, and became known as The Weeping Time.

Mortimer Thomson, a popular newsman of the day, wrote an article about the auction for the New York Tribune entitled What Became of the Slaves on a Georgia Plantation:

On the faces of all was an expression of heavy grief; some appeared to be resigned to the hard stroke of Fortune that had torn them from their homes, and were sadly trying to make the best of it; some sat brooding moodily over their sorrows, their chins resting on their hands, their eyes staring vacantly, and their bodies rocking to and fro, with a restless motion that was never stilled…

The two-day sale netted $303,850. Champagne bottles popped in celebration. And Pierce Butler, once again wealthy, made a trip to southern Europe before returning home to Philadephia.

After her daughters were married, Fanny lived periodically with each of them. Frances married the Reverend James Wentworth Leigh, a British pro-slavery sympathizer. Daughter Sarah married Dr. Owen Jones Wister of Germantown, an avowed abolitionist. Their son Owen Wister, born in 1860, wrote the first novel set in the Wild West, The Virginian (1902).

By the time the Civil War erupted in 1861, Fanny had been reunited with her daughters. However, family beliefs were once again divided: Fanny and daughter Sarah were pro-Union; Pierce and Frances were pro-South. In early 1861 Pierce and daughter Frances went to Georgia. When they returned to Philadelphia in August, Pierce was arrested by U.S. Marshals under suspicion of gunrunning for the Confederacy. He was released in September, but did not return to the South until after the war.

Fanny continued to give dramatic Shakespearean readings to support herself in both the United States and England, and published a number of memoirs as well as some poetry. She lived for a time in Lenox, Massachusetts, in a cottage next to her good friends Elizabeth and Charles Sedgwick before returning to England in 1863.

Fanny’s decision to finally publish Journal of a Residence on a Georgian Plantation was triggered by England’s hostility toward the North and Abraham Lincoln‘s Emancipation Proclamation. The journal was published in England in May 1863, 22 years after her visit to Butler and St. Simons Islands, and makes a correlation between the gender-based oppression of slave women and her own subjugation in the legal and social systems of the 19th century United States.

An American version was published in July of the same year. White Southerners vilified the book; some continued to discredit her account of plantation for more than a hundred years afterward. Despite this campaign, the journal has become a classic and a reliable source for scholars investigating plantation life and the appalling conditions in which slaves lived.

Following the war, Pierce Butler returned to Butler Island with his daughter Frances. He found numbers of former slaves living there, and arranged for them to work for him as share-croppers. Management of the plantation was difficult, however, and Frances returned to Philadelphia.

After Pierce’s death, Fanny moved at Butler Place, but her daughter Frances was determined to continue her father’s Georgia plantation, and returned to Butler Island to continue organizing the business. Frances published her own memoir of the region in 1883, Ten Years on a Georgia Plantation, which was intended as a direct refutation of many of her mother’s claims about race relations.

Fanny made her final return to England in 1877, where she lived using her maiden name till her death. Even in her seventies she wrote a comedy and a historical novel and enjoyed the admiring friendship of Robert Browning, Edward Fitz-Gerald, and Henry James. She wrote several autobiographical works, including Record of a Childhood (1878) and Records of Later Life (1882).

Not everyone was convinced of Fanny Kemble’s integrity. Historian Margaret Davis Cate maintained that Kemble had deliberately introduced deceptive content in her journal to heighten its dramatic appeal to her readers. In Fanny Kemble: A Performed Life, Deirdre David states that Kemble really thought of slaves as “untrained savages” prone to laziness and stupidity with “coarse woolly hair,” and described one of the black boatmen as “a large quadruped of the ape species.”

Today the Georgia plantations Kemble wrote about reflect the diversity of the region: the former estate on Butler Island has been turned into a state wildlife preserve; another patrimonial home on St. Simons has been obliterated by development, absorbed on the grounds of a marina; and Little St. Simons Island remains in the hands of the family that bought the land from Fanny Kemble’s daughters and is now a luxury resort.