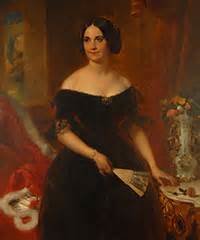 Anna Maria Calhoun Clemson (1817-1875) was the daughter of the prominent U.S. Senator from South Carolina, John C. Calhoun. She was very well educated and worked with her father in Washington, DC, where she met and later married Thomas Green Clemson. The land Anna Maria inherited after her mother’s death included Calhoun’s Fort Hill mansion, which is now at the center of Clemson University in Clemson, South Carolina.

Early Years
Anna Maria Calhoun was born February 13, 1817, at Bath Plantation in Willington, South Carolina. She was the daughter of John C. Calhoun, noted U.S. Senator and seventh U.S. Vice President, and Floride Bonneau Colhoun Calhoun. Anna acquired her mother’s grace and style and her father’s interest in politics. She was well educated at a women’s academy in Columbia, South Carolina.

Working for three years with her father in Washington, DC, copying some of his correspondence, Anna had stated that she would never marry. The close companionship she and her father shared could well have continued, but she fell in love with Thomas Green Clemson, a well-educated confirmed bachelor from Philadelphia.

Their courtship began in the spring of 1838, and brought together a most unlikely couple. Although a confirmed bachelor, thirty-year-old Clemson was apparently quite smitten by Anna, age 21. Sometime between their meeting in May of 1838 and her departure for her family’s Fort Hill Plantation with her father in mid-July, she accepted his proposal.

John C. Calhoun gave his favorite child away at the wedding in the parlor at Fort Hill on November 13, 1838, though the multi-talented Clemson had many attributes characteristic of his illustrious father-in-law. At first the couple lived in Philadelphia, where an infant daughter died in 1839, but returned to Fort Hill in 1840. Two of their children – Calhoun Clemson (1841) and Floride Clemson (1842) – were born there.

Calhoun offered his son-in-law not only a roof over his head, but also inspired Clemson’s lifelong interest in farming. Calhoun was a progressive farmer experimenting with various crops, breeds and techniques such as terracing and deep plowing. Clemson’s introduction to agriculture was an important outgrowth of his marriage into the Calhoun family. In 1843 Clemson bought a 1000-acre plantation called Cane Brake in the Edgefield District of South Carolina.

Calhoun, who was then Secretary of State for President John Tyler, knew of his son-in-law’s desire to return to Europe and suggested the appointment of Clemson as the highest-ranking ambassador to Belgium. Anna was not as excited about the trip as Thomas.

The Clemsons moved to Belgium in October 1844. The separation from her family was particularly painful for Anna; her father died in 1850 while they were still abroad. She was also concerned about their Cane Brake plantation. However, she supported Clemson by assuming secretarial duties for the American legation and by accepting social invitations for evening affairs.

After more than six years, Anna gladly returned to the United States with Clemson and their children, Calhoun and Floride, in April of 1851. Following a summer at Fort Hill, Clemson sold Cane Brake, and Anna moved about with her family for another two years to various locations in the North. In June 1853, the Clemsons bought a small farm in Bladensburg, Maryland, near Washington, DC. Grateful to have her own place, Anna named the farm simply The Home.

During the following years Clemson’s increasing bad temper and angry outbursts made life difficult for those around him, particularly Anna. The condition from which Clemson apparently suffered caused a chronic depression, with symptoms such as irritability or excessive anger, poor appetite and feelings of hopelessness. Unfortunately, the seriousness of his misunderstood condition worsened. With the drugs and therapy available today, he might have improved.

The Clemson’s fourth child, Cornelia ‘Nina,’ was born October 3, 1855. Anna wrote to her daughter Floride away at boarding school in Philadelphia in September of 1856 that her father ate little but complained much. With young Calhoun Clemson’s return home in November 1856, Anna and Clemson concluded that the teenager’s health must take precedence in their lives for the next few years.

Thomas Clemson continued the water cure treatment that Calhoun had undergone in Massachusetts, rousing the household at five o’clock in the morning with his preparations for the hated regimen that Calhoun called the “water tortures.”

Fourteen-year-old Floride’s summer stay at The Home turned out to be a stressful one. There had been a chance for another diplomatic position for Clemson, but the failure to receive the appointment could well have resulted in a depressive spiral characterized by an irritability that contributed to hostility between father and daughter.

Little Nina died unexpectedly from scarlet fever on December 20, 1858, which provoked such despondency in Clemson that Anna did all in her power to prevent her husband from committing suicide. Anna wrote to Floride that her “father is uncommonly amiable, as he always is when we are alone, both because he is dependent on me and when you children are not here, many reasons why I must interfere with him do not exist, and I can let him do as he chooses.”

In January 1860 Clemson accepted a position as head of the Patent Office’s Agricultural Department. He was in excellent spirits when he assumed the duties of his position in February, though the $2,000 salary was much less than he had anticipated. Anna wrote to Floride that her father got on famously in his new office, but did not mention that she was pregnant with her fifth child. In early March 1860, at age forty-three, Anna suffered a miscarriage.

The Civil War
Clemson resigned his government position on March 9, 1861. Fifty-four-year-old Thomas Clemson and twenty-year-old Calhoun Clemson left Maryland in June and enlisted in the Confederate Army. Clemson was assigned to the Trans-Mississippi Department; Calhoun spent two years in a Union prison camp on Johnson’s Island in Lake Erie, Ohio. Anna eventually rented out the farm and moved temporarily to a five-room place near Baltimore in June 1864.

After a harrowing journey south in the summer of 1865, Anna and Floride lived with Anna’s mother at her home ‘Mi Casa’ in Pendleton, South Carolina, where they were reunited with Calhoun and Clemson. Once prosperous, Pendleton was now a place of misery and need, and those who had lived the good life there were reduced to varying stages of abject poverty. The citizens of Pendleton fought for the right to control their community’s affairs and restore its order and harmony.

Anna participated in every good endeavor and distinguished herself among her neighbors. In the role of community leader, she contacted some of her wealthy northern friends and asked for money to provide relief for the pitiful plight of her neighbors.

She encouraged her husband’s interest in scientific agriculture in the South by making their home a focus of life in Pendleton and providing hospitality to those who shared his vision of an animated system of agriculture as the main remedy to the distress the region was suffering.

However, her primary concern in the summer of 1866 was the care of her mother, whose yearlong ordeal with cancer mercifully came to an end on July 25. According to the terms of Mrs. Calhoun’s will, Anna was her mother’s principal heir. She was the recipient of three-fourths of the bond and mortgage claim on Fort Hil, along with most of the personal property and furniture, silver and jewels. Anna could do with the Calhoun home as she saw fit.

In 1869, Floride married Gideon Lee, Jr. of New York and was happy in her new life at ‘Leeside,’ their home in Carmel, New York. The birth of a baby girl, Floride Isabella, on May 15, 1870, not only brought much joy to the family, but also made more meaningful than ever the relationship Anna shared with her daughter.

Late Years
Unfortunately, the untimely death of twenty-eight-year-old Floride Clemson Lee (probably from tuberculosis peritonitis) on July 23, 1871, left a grief-stricken family. Still stunned by the loss of their daughter, the Clemsons were devastated by the sudden loss of their thirty-year-old son Calhoun, who was killed instantly in a train wreck on August 10, only seventeen days later.

Anna, now alone with her husband, faced a man who became old and bitter. Disheartened by his failed efforts to establish a school for the scientific study of agriculture in South Carolina and now despondent at the death of his children, Clemson depended upon Anna more than ever. The school he had envisioned now became increasingly important to Anna who began to think of it as a monument to her father and her son.

Litigation involving Anna and her brother’s family was finally settled by an auction of the Fort Hill property on January 21, 1872. Anna received 814 acres, including the mansion, and young Floride Isabella Lee would inherit 288 acres. The Clemsons retired to Fort Hill in 1872 and lived there for the remainder of their lives.

On August 9, 1874, Anna selected a committee to issue a circular calling for statewide support of a plan to build on land at Fort Hill a scientific agricultural college. Anna complained little about her health problems, but she was much overweight and suffered from the genetic heart condition that had suddenly taken the life of her brother Andrew in 1865.

Anna Maria Calhoun Clemson died at Fort Hill from a sudden heart attack on September 22, 1875, at age fifty-eight. There was little comfort for Clemson who buried his wife beside their son in the St. Paul’s churchyard.

When Thomas Clemson died on April 6, 1888, he left the Fort Hill estate and $80,000 cash to establish a new college that would teach scientific agriculture and the mechanical arts. Clemson Agricultural College of South Carolina (with military training required) opened its doors in 1893 to 446 cadets. Today, Clemson University occupies Fort Hill, and the mansion is at the center of the campus.