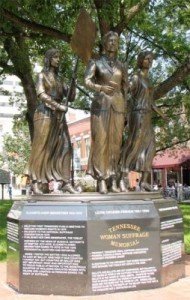 Elizabeth Avery Meriwether (1824–1916) was a Tennessee author and publisher. Because of her vocal opposition to the Union Army, General William Tecumseh Sherman ordered her to leave Memphis in December 1862. Meriwether was also a prominent activist in the women’s suffrage movement, and is depicted in a life-size bronze statue in the Women’s Suffrage Memorial in Knoxville, Tennessee.

Elizabeth Avery was born in Bolivar, Tennessee, on January 19, 1824. Financial problems led the family to move to Memphis around 1835. In her autobiography, Elizabeth reveals little about her childhood other than to note that her family moved to Memphis when she was eleven. It is obvious, however, that she was well educated.

Elizabeth’s father Nathan Avery was a physician and farmer who died early in 1847. Her mother Rebecca Rivers Avery, the daughter of a Virginia planter, died in 1848, leaving the siblings in a financial crisis. Elizabeth’s brother Tom sought outside employment to support his four sisters, and Elizabeth operated a school for some 25 students in the family’s dining room.

In 1852 Elizabeth married Minor Meriwether, a railroad civil engineer and a descendant of Meriwether Lewis, the explorer. Carrying out the wishes of Minor’s late father, the couple sold part of Minor’s inherited land to free his slaves and repatriate them to Liberia. Both Meriwethers spoke of their marriage as strong and happy. Elizabeth bore three sons: Avery in 1857, Rivers in 1859 and Lee (named for General Robert E. Lee) in 1862.

When the Civil War began, Minor Meriwether joined the Confederate army in October 1861, serving as an engineer constructing defenses and railroads, leaving Elizabeth in Memphis.

Tennessee spent most of the war under Union occupation. Large federal armies were stationed in or near the cities of Nashville, Knoxville, Chattanooga and Memphis, and General William Tecumseh Sherman was placed in command of Memphis in 1862. Anyone who disagreed with Union policies was subject to arrest. Union officials also conducted random searches of homes looking for evidence of Confederate support.

Elizabeth Avery Meriwether was defiant during the Union occupation of Memphis and very vocal in her advocacy of the Confederate cause, bitterly resenting the presence of Union soldiers in her town. In December 1862, after several unpleasant encounters, General Sherman banished Elizabeth from Memphis. At that time, she had two sons ages three and five and was pregnant with a third.

I seemed all of a sudden to realize the desolateness of my position, alone in the world with two children, driven from pillar to post, my husband off in the army, I knew not where – surely it was a pitiable situation. I became filled with self-pity and cried as if my heart would break.

Forced on the road as a refugee, at first she attempted to follow her husband’s unit, and delivered her third child in a stranger’s house on Christmas night in 1862. She resorted to stealing corn for food for her children, selling clothing and even sneaking back into Memphis on a dangerous mission to pay taxes so her property would not be sold at auction. She eventually ended up in Tuscaloosa, Alabama.

While in Tuscaloosa, Meriwether resumed her childhood pastime of writing. She won a competition sponsored by the Selma Daily Mississippian offering $500 for the best story dealing with the war. Her short story The Refugee is based partly on her own experiences traveling through Alabama and Tennessee. Encouraged by this success, Meriwether wrote The Yankee Spy, which a newspaper planned to publish as a book, but when the Confederacy fell, the project was abandoned.

After the war Minor Meriwether purchased a modest Memphis home for his family on the current site of the Peabody Hotel. Since Memphis did not suffer the destruction of a land battle, all buildings were basically intact and Memphis was poised for growth at the end of the war. Nathan Bedford Forrest and Jefferson Davis lived in Memphis after the war. Minor Meriwether assisted Nathan Forrest in forming the Ku Klux Klan. One of the early organizational meetings was held in Elizabeth’s kitchen.

Elizabeth Meriwether petitioned occupation forces under Union General Stephen A. Hurlburt in an effort to regain title to her girlhood home which had been confiscated by the Union during the war, and was finally successful. Thus recognized as a property owner and tax payer, she obtained a voter registration in 1872. In 1876 she went to the polls and attempted to vote in the presidential election of that year, and rented a theater and held a meeting to explain her beliefs.

During the 1870s Meriwether combined her writing with her interest in social reform. She was one of the first women in the state to publically push for women’s suffrage in the early 1870s. She wrote letters to newspapers and published a pamphlet about women’s rights. For a year, she published a small newspaper, The Tablet, which showcased her views on women’s issues, divorce law and equal pay for women teachers.

In 1876 she made one of the first public suffragist speeches in Memphis. She was active in the Women’s Christian Temperance Union and belonged to the National Woman Suffrage Association, and presented unsuccessful women’s suffrage petitions at both the Democratic and Republican national conventions in 1880.

In 1881 Meriwther joined Elizabeth Cady Stanton and Susan B. Anthony on a speaking tour in New England. In her book of recollections, she quoted a newspaper that said her “keen sarcasm, wit and humor caused frequent bursts of laughter and applause.” Meriwether was once stopped at a train station by a young man who knelt beside her and began praying for her. She told him he was probably suffering from dyspepsia (indigestion), and to get up.

Her sister-in-law, Lide A. Meriwether formed the first suffrage league in Memphis in 1889, also the first in the state. Other leagues were formed in Maryville in 1893 and in Nashville in 1894. During the Tennessee Centennial Exposition in 1897, suffragists met in the Woman’s Building and formed a statewide association.

Elizabeth Meriwether’s published writing includes two novels, The Master of Red Leaf (1872) (a description of life on a southern plantation before the Civil War and a justification of secession) and Black and White (1883), and a play, The Ku Klux Klan, or The Carpetbagger in New Orleans (1877).

Her non-fiction works include Facts and Falsehoods about the War on the South, published under the pseudonym George Edmonds in 1904, and The Sowing of the Swords, or The Soul of the Sixties in 1910. Her last written work was a memoir entitled Recollections of 92 Years, which was serialized in many Tennessee newspapers in 1916. Her son Lee, also a writer, published his mother’s memoir as a book in 1958.

Not only do most of her works deal with the antebellum South, but unlike other postwar southern authors, Meriwether refused to acknowledge that slavery had been a moral or social evil. Her writing always idealized the Confederate cause and the traditional race ideology of the Old South. Her fiction is replete with stereotyped black characters – happy, carefree, childlike, and unable to govern themselves without the discipline of slavery.

Minor and Elizabeth Avery Meriwether built the Meriwether Mansion in the late 1800s in what was then the most fashionable neighborhood in the city of Saint Louis, Missouri, after they moving there from Memphis.

Elizabeth Avery Meriwether died in St. Louis on November 4, 1916, at the age of 92. She was buried at Bellefontaine Cemetery in St. Louis.