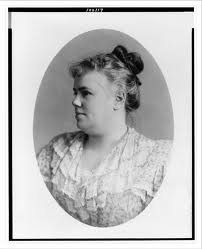 Fanny Holmes was the wife of U.S. Supreme Court Justice Oliver Wendell Holmes, Jr. Fanny suffered a severe attack of rheumatic fever in July 1872, just a month after their wedding. She eventually recovered, but another bout of that illness in the mid-1890s caused her hair to turn gray almost overnight. They had no children, and except for her relationship with her husband, she was virtually a recluse.

Fanny Bowditch Dixwell was born in December 1840. Oliver Wendell Holmes, Jr. was born in Boston, Massachusetts, on March 8, 1841, to prominent writer and physician, Oliver Wendell Holmes, Sr. and noted abolitionist Amelia Jackson Holmes. During the late 1840s, John Quincy Adams, President from 1825 to 1829, was a frequent visitor to the Holmes household and was a mentor to young ‘Wendell.’

Holmes – tall, thin, lantern‐jawed – resembled his mother more than his father, and he was deeply affected by her. He was her favorite, and he acquired a secure self‐confidence as a result. He also received from his mother a powerful sense of duty and a talent for strong friendships. He supported the abolitionist movement that was close to his mother’s heart, and entered Harvard College in 1857.

Holmes in the Civil War
The Civil War broke out just before his graduation, and Holmes enlisted in the 20th Massachusetts Infantry Regiment. He rose to the rank of first lieutenant, and saw much action. He was wounded three times during the war, most seriously in October 1861 at the Battle of Ball’s Bluff (in the chest). He was also wounded in the battle at Antietam Creek in September 1862, and suffered an injury to his heel at Chancellorsville (May 1863), and apparently hoped his foot would be amputated, so he could leave the military.

His experiences in the Civil War greatly affected his view of life and the law. Though he would later glorify his wartime service, he did not reenlist when it expired. Holmes apparently felt that he had done more than his duty, and had survived one battle too many to continue tempting fate. He had started the war an idealist and ardent abolitionist; by the end he was disillusioned and dispirited.

For all his fame and accomplishments as a jurist and legal scholar, Holmes took the most pride from his service with the Harvard Regiment. Using his immense talents as a writer, he paid homage throughout his long life to his fellow Harvard men of the 20th Massachusetts. One of the most quoted Memorial Day speeches ever given was a brilliant 1884 Holmes’ address containing the phrase: “In our youth our hearts were touched with fire.” This speech also contains touching tributes to fallen 20th Mass comrades.

Holmes and the Law
Oliver Wendell Holmes, Jr. entered Harvard Law School in 1864. Though at first uncertain that law would be his profession, he soon became immersed in study and decided that the law would be his life’s work. He graduated in 1866 and was admitted to the bar in 1867 and practiced law in Boston for several firms over the next 15 years without great distinction.

During his early years as a lawyer, Holmes often visited London during the social season of spring and summer. He formed his closest friendships with men and women there, and became one of the founders of what was soon called the ‘sociological’ school of jurisprudence in Great Britain, which would be followed a generation later by the school of ‘legal realism’ in America. 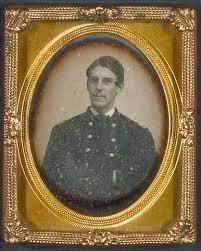 Holmes believed a man had to earn his reputation before he turned 40, or he would not make it at all. In 1880, shortly before his 40th birthday, he was invited to give a series of twelve lectures on common law at the Lowell Institute in Boston. From those lectures he compiled a book, The Common Law (1881), which brought him the international recognition he had long desired.

In the book he articulated his signature judicial philosophy: the law and its interpretation shift with the changing demands of history and adjust to what the majority of people believe is necessary and fair. This novel theory challenged prevailing beliefs that law was a set of rules applied by formal logic.

Holmes set forth his view that the only source of law is a judicial decision. Judges decide cases on the facts, and then write opinions afterward presenting a rationale for their decision. A judge is obliged to choose between contending legal theories, and the true basis of his decision is necessarily drawn from outside the law. These views endeared Holmes to the later advocates of legal realism.

Legal realism is a family of theories about the nature of law. The U.S. legal realism movement began in 1881 after Holmes published The Common Law, which was an attack on the orthodox view of law. The essential tenet is that all law is made by human beings and is therefore subject to human foibles, frailties and imperfections. The movement flourished during the 1920s and 1930s.

In the fall of 1882, Holmes became a professor at Harvard Law School, but in the middle of his first term there, he accepted an appointment to the Massachusetts Supreme Court. He took the oath of office on December 15, 1882, and resigned his position at Harvard. On August 2, 1899, Holmes became Chief Justice of that court.

During his service on the Massachusetts court, Holmes continued to develop and apply his views of the common law, carefully developing the principles of free expression as a common-law doctrine. He recognized workers’ right to organize trade unions as long as no violence or coercion was involved, stating that fundamental fairness required that workers be allowed to combine to compete on an equal footing with employers.

Wendell and Fanny
Holmes and Fanny met in 1851 when he entered her father’s Private Latin School at age ten. They were close friends from at least 1858 on, and corresponded while he was serving in the Union Army during the Civil War and while he concentrated on establishing his career.

On March 13, 1872, in a letter to a friend, Dr. Holmes referred to his son’s relationship with Fanny as “a very long and faithful one – both of them dating almost from childhood.” He indicated that the couple “did not see their way to marriage and consequently have not called themselves engaged until quite recently, though it was plain enough that they were entirely devoted to each other.” He also stated that “Wendell has found the reward of his fidelity to a young lady of most remarkable gifts and qualities.”

Holmes married Fanny Bowditch Dixwell on June 17, 1872, apparently happily for both parties. She was a somewhat reclusive woman who declined to accompany Holmes on all but one or two of his European excursions. They had no children, possibly because Fanny was 32 when they married and suffered from poor health. They did, however, adopt and raise an orphaned cousin named Dorothy Upham.

Holmes still lived at home with his parents when he married Fanny and they continued to live there; they had no honeymoon. Some say that the marriage was arranged by their families, but the two were close companions. Holmes said that Fanny was almost a recluse. “I have my work and a fair number of people whom I like to see… and there was no one but me with whom she was very intimate.”

Part of the reason may have been the severe attack of rheumatic fever Fanny suffered in July 1872, just a month after their wedding. At that time such illnesses were simply allowed to run their course. Fanny was still bedridden the following October, but eventually recovered. Fanny experienced a recurring bout of that illness in the mid-1890s, and her hair turned gray almost overnight.

Fanny made beautiful embroideries which she displayed in museums in the early 1880s, but for whatever reason, destroyed most of them when she and Holmes moved to Washington, DC, in 1902. That was the only time she shared Holmes’ interest in political affairs – just after his appointment to the Supreme Court.

Fanny Bowditch Holmes died on April 30, 1929, at age 88. She was buried at Arlington National Cemetery in Arlington, Virginia.

Holmes on the U.S. Supreme Court
The opportunity for ultimate professional advancement came in 1902, when Holmes was appointed by President Theodore Roosevelt to the United States Supreme Court. His appointment came about because Roosevelt and Holmes were both friends with Massachusetts Senator, Henry Cabot Lodge, who persuaded Roosevelt that Holmes would be favorable towards Roosevelt’s progressive policies. 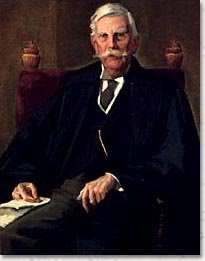 Formally nominated on December 2, 1902, Holmes was unanimously confirmed by the U.S. Senate on December 4, receiving his commission the same day. According to some accounts, Holmes assured Roosevelt that he would vote to sustain the administration’s position. The president would later regret the appointment, after Holmes participated in striking down some of Roosevelt’s initiatives, saying, “Out of a banana I could carve a firmer backbone.”

He loved the work and found it easy – the legal research and the ‘writing up’ of cases – and could see immediately to the heart of an issue. Holmes was never accused of modesty, especially concerning his superiority to his fellow judges. Though he was happy on the Supreme Judicial Court, he desired greater fame and challenge.

Holmes was known for his pithy, short, and frequently quoted opinions. In his years on the bench, he ruled on cases spanning the whole range of federal law. He is remembered for his opinions on copyright law, the law of contempt, the antitrust status of professional baseball, and the oath required for citizenship.

By the time Holmes was 80, he had dissented in so many opinions that he became known as ‘The Great Dissenter.’ He was often at odds with his fellow justices and was capable of eloquently expressing his opinions.

Oliver Wendell Holmes, Jr. finally retired on January 12, 1932, after his fellow justices on the court suggested that it was time for him to step down. At 90 years of age, he was the oldest justice to serve in the court’s history, and had served on the Supreme Court for thirty years, longer than any other person.

Holmes often seemed lonely in his final years, though he was continually attended by a parade of visitors from Harvard and Washington, including President Franklin Roosevelt. Holmes was also attended by a law clerk, a young Harvard law graduate, even after he had ceased to serve on the court. The hiring of Supreme Court law clerks, usually law school graduates eager for this most prestigious of post-graduate work, was another of his innovations.

Holmes’ work on the court began to fall off in his last judicial term or two, perhaps because of a slight stroke. He was prevailed upon to retire in 1932, though he remained perfectly lucid for most purposes until his death.

Justice Oliver Wendell Holmes, Jr. died of pneumonia in Washington, DC, on March 6, 1935, two days short of his 94th birthday, and is buried beside Fanny in Arlington National Cemetery. The very top of his gravestone lists what this legal icon considered his greatest honor in life: ‘Captain and Brevet Colonel, 20th Mass. Volunteer Infantry.’

In his will, Holmes expressed his love and devotion to his country by leaving his estate to the U.S. government. His personal effects included his Civil War Officer’s uniform still stained with his blood and ‘torn with shot’ as well as the carefully wrapped Minie balls that had wounded him three times in separate battles.

We are all tattooed in our cradles with the beliefs of our tribe; the record may seem superficial, but it is indelible.