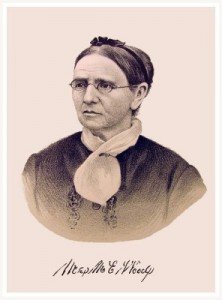 During the Civil War, Mehitable Ellis Woods worked for the Ladies’ Aid Society of Fairfield, Iowa, delivering supplies to hospitals and the front lines, and nursing the sick and wounded wherever she was needed. In 1863 this brave lady made her first trip down the Mississippi into the heart of the Confederacy and returned many times. She was twice under fire, but escaped uninjured and lived for many years after the war.

Mehitable Owen was born on the banks of Lake Champlain in Chittendon County, Vermont, on September 28, 1813, the youngest of five children born to Julius and Hettie Cassel Owen. Her father was a native of Salisbury, Connecticut, and an uncle of Ethan Allen of Revolutionary fame. Her family was of Welsh origin and descended from one of two brothers who came to America during colonial days and took an active part in the War for Independence.

Owen received a very limited education. Her mother died when she was quite small and her father married again. At the age of twelve she went to live in the home of a Mr. Mears, a Deacon in the Congregational Church. Later she moved to the home of a sister, with whom she moved to New York.

In 1835 Mehitable joined another sister in Harvard, Illinois, where she met and married G. M. Fox, a carpenter by trade. In 1839 they started for Fairfield, Iowa, where Mr. Fox purchased a lot and built a house, which was then known as the ‘big house.’ He was a first-class builder and erected many dwellings for the early settlers, besides assisting in the erection of the first courthouse.

Mr. Fox died in 1844 and three years later Mehitable wed Parish Ellis; he lived but four years. In 1857 she married Joel Woods. Though a tailor by trade he was a man of splendid natural endowments and a well-trained mind. In 1858 he went to Colorado and engaged in mining, and so won the esteem of his fellow miners that he was elected to the Legislature. He was shot and killed in a hunting accident in Arizona.

The Civil War
Though left alone in the world, Woods found a useful purpose for her activities. The Civil War began and the Ladies’ Aid Society of Fairfield, Iowa, (population 2000) was organized in October 1861. During 1861 the Society hardly got into working condition. On April 3, 1862, Woods took a quantity of sanitary supplies to distribute at the hospital at Keokuk, where she remained during the greater part of the summer to care for the troops.

Seeing that her work at Keokuk was done, Mrs. Woods offered to carry the Society’s supplies to the field, where they were more needed, and assist in nursing the sick and wounded, if they could secure her a pass. The Society received the necessary papers from the Secretary of War Edwin M. Stanton, and Woods obtained her own commissary wagon, and acted as the Society’s agent in field and hospital for the balance of the war.

Mrs. Woods personally delivered supplies to the front lines – unaccompanied – and often served as physician, nurse and friend. When questioned by military officials about her authorization, she simply said that she was going “to see my sons, all of whom are in the army.” Unfortunately Mrs. Woods had no sons, except the Iowa boys in blue. Woods made several perilous trips, taking cargo that varied from ten to thirty-seven tons.

In January 1863, she left for Springfield, Missouri, with supplies for the 19th Iowa regiment. Arriving at St. Louis she found communication with Springfield cut off, and being impossible to proceed, she distributed her stores at the hospitals in St. Louis and returned home.

Soon afterward she made her first trip down the Mississippi into the heart of the Confederacy. Her plan was to travel incognito, letting her business be known only to the proper authorities. In March 1863 she went with supplies for the 3rd Iowa Cavalry at Pilot Knob, Missouri; the 4th Iowa Cavalry at Helena, Arkansas; and the 30th Iowa Infantry at Milliken’s Bend, Louisiana. The 30th had endured exposure and were in a deplorable condition.

Mrs. Woods returned as soon as possible, and from Fairfield and neighboring towns they gathered a large quantity of supplies. She again reached the 30th Infantry at Vicksburg, Mississippi, in June 1863. In October she went to the 4th Iowa Cavalry at Big Black River, Mississippi; and in November to the 10th and 30th Iowa at Bridgeport, Alabama; and to the 2nd and 7th at Pulaski, Tennessee.

In 1864 Mehitable Woods made several trips to the army – in March to the 36th and 33d Infantry at Little Rock, Arkansas; in May to the Iowa regiments in the 15th Army Corps at Nashville and Chattanooga, Tennessee; in October to Barancas, Florida; and in November to Memphis, Tennessee. In April 1865 she went again to Milliken’s Bend, Louisiana. She was twice under fire, but escaped uninjured.

In the early part of October 1864, the Society had been advised by letters from the 19th Iowa, then in Florida, that they were suffering from scurvy, and asking them to send them anti-scorbutics, and they were provided.

The Ladies’ Aid Society of Fairfield, Iowa, never numbered more than forty members. These few were devoted in their work, and were always well sustained by a loyal and generous people. What seemed to be obstacles were set aside by repeated letters from brave soldiers to their friends at home about the visits of Mrs. Woods.

Her last trip was made under the auspices of the United States Sanitary Commission. With 37 tons of supplies she proceeded to New Orleans, there to take a boat for Baraucus Island off the coast of Louisiana. A sanitary officer advised her not to go, saying that she could not reach her destination and that the vessel in which she was going was unsafe. If she would turn over her stores to him he would distribute them.

Woods insisted upon going, whereupon the man became irate and said she should not, but she replied that she had a pass from the Government. The officer then said that she could not go if she “had a pass from Heaven,” but she showed him her papers and said no power on earth should keep her from going.

Arriving at the island, she found her assistance much needed. Several thousand disabled soldiers were left there, while the able-bodied went to assist in the capture of Mobile, Alabama. Woods remained a month, and on Christmas Day she had one of the most enjoyable feasts ever served, consisting of the crackers and butter from Iowa and fresh oysters gathered from the ocean.

After the war Mrs. Woods led a quiet life, unaware of the great honors and gratitude she had won. In 1886 she was a State delegate to the National Encampment at San Francisco. Unknown and unsolicited on her part, her friends secured for her a pension of $25 per month.

Mehitable Ellis Woods lived in Fairfield, Iowa, for many years, and died there in September 1891. She is buried in the Old Fairfield City Cemetery with the first two of her three husbands; the third was buried at Fort Whipple, Arizona, following a hunting accident.