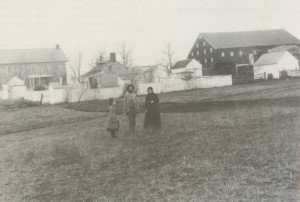 Site of a Union Field Hospital

On July 1, 1863, the George Spangler farm buildings were seized – the main house, summer kitchen and Pennsylvania bank barn. Based on the size of the buildings on the property, the farm’s relatively protected position from enemy artillery fire, its supply of well water, the large and accessible farm fields and its promixity to Baltimore Pike, it was chosen as the site of the field hospital for the Union XI Corps with at least seven Federal surgeons.

Image: The George Spangler Farm, circa 1890, shows the house, barn and small outbuildings such as the smokehouse and summer kitchen. It is the best surviving example of a farm used as a corps field hospital during the Battle of Gettysburg, where upwards of 1900 men were treated and where the beloved Confederate General Lewis Armistead died.

Established in the early 1800s, this farm was acquired by George and Elizabeth Brinkerhoff Spangler in 1848. They resided there during the years they raised their four children born between 1842 and 1848. The Spangler property was a functioning farm with horses, milk cows, sheep and pigs. On this farm, they harvested crops including wheat, corn, oats, buckwheat, potatoes, sweet potatoes and hay.

The 80-acre farm is bounded by Granite Schoolhouse Lane and Blacksmith Shop Road between Taneytown Road and Baltimore Pike, which was the logistical center of the Union battle line during the three-day Battle of Gettysburg, July 1-3, 1863. Because of these factors, the Union command selected the farm as a storage and staging area for artillery and ammunition reserves.

Granite Schoolhouse Lane and Blacksmith Shop Road were used to supply troops, artillery and ammunition during the battle. Timely artillery support from the George Spangler Farm was instrumental in helping the Union Army hold the high ground on July 2. Infantry support from the Union V and XII Corps moved across the fields of the farm in their hasty rescue of the beleaguered Union battle line.

Winfield Scott Hancock was stationed in southern California in November 1858, serving as a captain under future Confederate Albert Sidney Johnston. There Hancock became friends with several officers from the South, and was especially close to Lewis Armistead of Virginia. Armistead’s wife and children had already died and he loved his friends deeply – they were now his family. Hancock and Armistead were like brothers.

With the attack on Fort Sumter, South Carolina, in April 1861, many Southern career soldiers were faced with the difficult decision of remaining with the Army they had served loyally for most of their lives, or leaving to fight for their home states. Like many of his Southern comrades, Lewis Armistead resigned from the U.S. Army on May 26, 1861, to serve his beloved Virginia.

On June 15, 1861, in an incident popularized in Michael Shaara’s novel The Killer Angels, Armistead attended a tearful farewell party for the departing Southerners given by their brother officers and wives and hosted by Winfield and Allie Hancock. No one knew when, or if, they would see each other again.

Before leaving California, Armistead gave a package to Allie Hancock for safekeeping. It contained his Bible and personal effects – to be opened only if he died in battle. To his friend Winfield he gave a new Major’s uniform and goodbyes were said, in what was to be a final farewell between dear and trusted friends. Hancock headed East to offer his services in the defense of the Union.

The climax of the Battle of Gettysburg took place on July 3. After a quiet morning, in early afternoon General Robert E. Lee ordered the most massive cannon attack ever on the North American continent. Then, he ordered 12,000 men to attack the center of the Union position, during which they would have to cross about a mile of open country.

Among the leaders of the event forever known as Pickett’s Charge was Confederate Brigadier General Lewis Armistead. The leader of the Union force being attacked was Armistead’s old friend Union Major General Winfield Scott Hancock. Having parted as friends in California, Hancock and Armistead were fated to cross paths again – on opposite sides at Gettysburg.

During the infantry assault, Armistead was leading his brigade across the field, waving his hat from the tip of his saber. He and his men reached the stone wall near the Copse of Trees, which was the charge’s objective. Armistead’s brigade got farther in the charge than any other, but they were quickly overwhelmed by a Union counterattack. This event has been called the High Watermark of the Confederacy – the closest they ever came to winning Southern independence, but the charge was repulsed. Nearly half of the attackers did not return to the Confederate lines.

Armistead was shot twice just after crossing the stone wall, and as he went down, he gave a Masonic sign asking for assistance. A fellow Mason, Captain Henry Bingham, of Hancock’s staff rushed to Armistead and offered to help. Bingham told Armistead that his old friend Hancock had just been wounded a few yards away. Armistead gave his personal possessions to the captain for General Hancock and whatever message he had relayed. This scene is also featured in The Killer Angels, in which Armistead is a principal character.

Hancock suffered a severe injury when a bullet struck the pommel of his saddle and penetrated eight inches into his right groin, carrying with it some wood fragments and a large bent nail from the saddle. His aides applied a tourniquet to stanch the bleeding; Hancock removed the nail himself, and is said to have remarked wryly, “They must be hard up for ammunition when they throw such shot as that.” His wound would require many months of hospital care, but to the surprise of many, Hancock recovered and resumed his command, but not until March 1864.

Armistead was taken to the XI Corps field hospital at the George Spangler Farm. His wounds were not believed to be fatal, because he had been shot in the fleshy part of the arm and below the knee. According to the surgeon that tended him, none of the wounds caused bone, artery or nerve damage.

Dr Daniel G. Brinton, a doctor who served at the field hospital, wrote in his diary:

The wounded soon began to pour in, giving us such sufficient occupation from the 1st of July til’ the afternoon of the fifth, I was not absent from the hospital more than once and then but for an hour or two. Very hard work it was, too and little sleep fell to our share. Four operating tables were going night and day… the number in the hospital was 1,000. A heavy rain came over in the afternoon [July 4th] and as we laid many in spots without shelter some indeed in the barnyard where foul water oozed up into their undressed wounds, the sight was harassing in the extreme.

We worked with little immersion, and with a minimum amount of sleep… shells fell within 20 feet of the room in which we were, and we were much in fear that the barn would blaze, which would have been an unspeakably frightful casualty. Among our wounded were three colonels, General Francis Barlow and General Armistead of the rebel army, a fine man, intelligent and refined.

The farm was completely transformed as soldiers, writhing in pain, filled the buildings and surrounding fields. It also saw service as the ‘overflow’ site, where many wounded Confederate soldiers were taken for treatment. One soldier wrote of the Spangler Farm hospital:

All the hospital tents have been put up and are filled, the barn is also crowded and hundreds of shelter tents [are] occupied yet the wounded are so numerous that some have yet to lie out in the open air…

Despite the surgeon’s opinion, Armistead died two days later around 9:00 o’clock a.m. His biographer, Wayne Motts, believes that Armistead died most likely from a pulmonary embolism, while others have argued that it was a combination of septic shock and extreme physical and mental exhaustion. Defiant to the end, his last few words spoken were, “Men who can subsist on raw corn can never be whipped.” His body was buried in the immediate area until it was reclaimed by his family and re-interred in Baltimore, Maryland.

Image: Friend to Friend Memorial
This monument is in the annex of the Gettysburg National Cemetery, and commemorates CSA General Lewis Armistead entrusting Union Captain Henry Bingham with his personal effects, particularly his pocket watch, during Pickett’s Charge. The polychrome bronze monument by Ron Tunison was dedicated on August 21, 1993.

The barn at the Spangler farm is a traditional Pennsylvania Bank Barn, with an earthen embankment leading up to the second floor. This structure housed scores of bleeding men immediately after the battle. Many more sought shelter here when the rains continued after the battle. Over 100 Confederate prisoners were guarded in the wagon shed on the side of the barn.

This field hospital remained in active use throughout July, treating Union and Confederate soldiers. The wounded at the farm were moved by August 1863 to other hospitals, including Camp Letterman General Hospital on the York Road east of Gettysburg. The farm also provided the grounds for temporary burial of deceased soldiers.

George Spangler rebuilt and repaired his home and farm buildings, and lived on the property until his death in 1904. The land has been farmed almost continuously since before the Civil War, and today it is a fine example of a Civil War-era farm. The farmhouse, barn and summer kitchen are still surrounded by acres of meadow grass, where tents full of wounded and dying men would have dominated the land almost 148 years ago.

The George Spangler Farm is located practically in the backyard of the Gettysburg National Military Park Visitor Center, but historians have had limited access to the property over the years because it has remained under private ownership.

However, on April 28, 2008, the Gettysburg Foundation, a nonprofit partner of the National Park Service, purchased the property and plans to restore the site and have it become part of the park. A majority of the fields, buildings and boundary lines associated with the Civil War-era George Spangler farm are intact and retain a considerable degree of integrity.