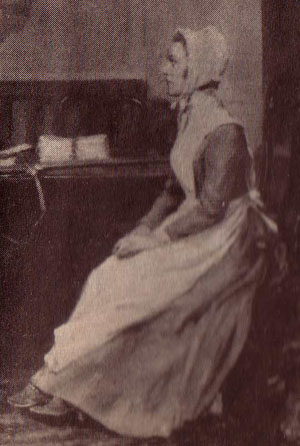 Heroine of the Battle of Whitemarsh

Lydia Darragh was a Quaker woman who crossed enemy lines during the British occupation of Philadelphia, Pennsylvania. Her mission was to pass information to General George Washington and the Continental Army, warning them of an impending British attack.

Lydia Barrington was born in 1729 in Dublin, Ireland. On November 2, 1753, she married the family tutor, William Darragh, the son of a clergyman. After a few years of marriage, they immigrated to the American colonies. Members of the Quaker faith, the couple settled in Philadelphia where there was a large Quaker community.

William worked as a tutor, and Lydia was a midwife. She gave birth to and raised five children: Charles, Ann, John, William, and Susannah; four others died in infancy.

Although Quakers are pacifists and against war and most were neutral during the Revolutionary War, the Darraghs were secretly in favor of the colonists’ cause, and their eldest son Charles was serving in the 2nd Pennsylvania Regiment of the Continental Army.

On September 26, 1777, after several victories over General Washington and his army, the British occupied Philadelphia. In October, Washington led an unsuccessful attempt to retake Philadelphia, and then he and his troops retreated to Whitemarsh.

Nearly one-third of Philadelphia’s population evacuated the city, and the majority of those remaining were British loyalists or were neutral in the conflict. As well-known Quakers, the Darraghs felt relatively safe remaining at their home.

Then British General Sir William Howe set up his headquarters across the street. From her vantage point, Lydia Darragh began to spy for General Washington’s army.

The following account is based on what Lydia Darragh later told to her daughter Ann.

In late fall 1777, British officers arrived on the Darraghs’ doorstep, demanding to use their large parlor for meetings. With nowhere to go, Lydia asked the soldiers if her family could stay in their home. Most of the family was allowed to remain at home; the two youngest children were sent to live with relatives outside the city. Quakers were known to be unsupportive of the war, and therefore posed no risk to the British.

On December 2, 1777, the British officers ordered the family to retire by 8 o’clock and stay in their bedrooms all evening while the British held a meeting. Darragh crept out of her room and hid in the closet of an adjoining room and listened.

She learned that British troops were to leave the city on the evening of December 4, 1777, and make a surprise attack on the Continental Army at Whitemarsh the following morning. Among those at Whitemarsh was Lydia’s son Charles.

As the meeting was breaking up, Lydia crept back to bed. One of the officers knocked on her door at two different intervals, but she did not respond. On his third knock, she opened the door, pretending to have been asleep. She followed the officers out, latched the door and blew out the candles.

Darragh wondered how she would get the message to the troops at Whitemarsh, and finally came up with a plan. The following morning, Lydia received permission from an officer to cross British lines to get some flour at a mill in Frankford. The request was not unusual; the poor were frequently given passes to purchase goods in the countryside.

Lydia dropped off her empty bag at the mill and then headed in the direction of the American camp. Her pass allowed her to go through the patrol stops without any trouble. Along the way she met an American officer, Colonel Thomas Craig of the Light Horse (a patriotic military organization), and told him about the impending British attack. The information was immediately relayed to Washington.

Lydia then made her way back to the mill, picked up her flour and started her long journey home.

General Howe marched out of Philadelphia just prior to midnight on December 4, 1777, with a force of approximately 10,000 men. When the British attacked the following morning, they realized that the Americans had been warned and were waiting for them.

Lydia Darragh Pewter Medallion
Reverse has this inscription:
Though she was opposed to war, this gentle Quakeress was an ardent patriot. She risked her life to warn Washington of secret British plans for a surprise attack.”

There are other variations of this story. Elias Boudinot, Commissary of Prisoners, stated that he was at the Rising Sun Tavern, a known message center for the colonists, on December 3. “After Dinner, a little poor looking insignificant Old Woman came in & solicited leave to go into the Country to buy some flour. While we were asking some Questions, she walked up to me and put into my hands a dirty old needle book, with various small pockets in it.”

Boudinot poked through the book failing to find anything useful until he got to the last pocket where he “found a piece of paper rolled up into the form of a pipe shank. On unrolling it, I found information that General Howe was coming out the next morning with 5,000 men, 13 pieces of cannon, baggage wagons, and 11 boat on wheels. On comparing this with other information, I found it true and immediately rode post to headquarters.”

Battle of Whitemarsh
Early on the morning of December 5, the British column was observed at Chestnut Hill, three miles from the American front. Washington sent out Brigadier-General James Irvine and 600 troops of the Pennsylvania militia to counter the British advance. That night, the British camped at St. Thomas Episcopal church on Bethlehem Pike, less than half a mile from the American positions.

On December 6, British forces constantly probed the American lines for weakness, only to be repelled by Washington and his troops. On December 7, General Howe attempted to turn the American left flank, but Washington countered with General Daniel Morgan’s corps of riflemen and Mordecai Gist’s Maryland militia.

The following day, after an series of intense skirmishes, Howe called off the attack on December 8, 1777, and returned to Philadelphia without engaging Washington in a decisive conflict.

Frustrated at not being able to confront Howe in a more decisive action, General Washington wrote in his report to the President of Congress: “I sincerely wish, that they had made an Attack; the Issue in all probability, from the disposition of our Troops and the strong situation of our Camp, would have been fortunate and happy. At the same time I must add that reason, prudence, and every principle of policy, forbade us quitting our post to attack them. Nothing but Success would have justified the measure, and this could not be expected from their position.”

In Philadelphia, the British soldiers conducted an investigation to find out who had revealed their plan. On December 9, Major John Andre, the spymaster who would lure Benedict Arnold to the British side, knocked on the Darraghs’ door, and questioned Lydia, asking if anyone in her house had been awake on the night of the meeting. She told Andre that everyone had been asleep early. He believed her.

With the British back in Philadelphia, Washington was able to march his army of about 11,000 men to winter quarters at Valley Forge, Pennsylvania. Some 2000 American soldiers died at the Valley Forge encampment during a harsh winter that lasted seven long months.

On June 18, 1778, the British left Philadelphia, American forces returned, and Lydia Darragh was reunited with her two children who had been staying with relatives. William Darragh died on June 8, 1783. In 1786, Lydia and her children moved into a new house, and she ran a store until her death.

In 1827, Darragh’s daughter Ann published the story of her mother’s spy work. In 1877, various people started questioning the truthfulness of the narrative. However, when Boudinot’s memoirs were published in 1909, the story became more plausible. Historians debated the validity of the tale, but now most accept that Darragh helped inform Washington of the impending British action.

Lydia Darragh’s courage is particularly impressive because she had to overcome the qualms of her Quaker pacifism and because she acted entirely alone, without telling her husband or anyone else what she planned to do. Her action, after all, was treason against the established government. Under the laws of any nation at that time, she was a traitor and could have been executed.

Darrah’s exploits were first documented in the article Lydia Darragh: One of the Heroines of the Revolution by Henry Darrach, published in 1915 by the City History Society of Philadelphia.