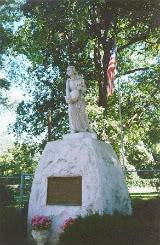 <Betty Zane Monument
Walnut Grove Cemetery
Martins Ferry, Ohio
The school children of the area collected money
to have a large statue of Betty Zane placed at
the entrance to the cemetery.

Elizabeth Zane, better known as Betty, was born on July 19, 1759, in Moorefield, Virginia. She was the daughter of William and Nancy Nolan Zane. Betty moved with her family at an early age to the area that now is Wheeling, West Virginia. Betty’s older brother, Ebenezer Zane, pioneered this area in the turbulent Ohio Valley, which was the home of Native Americans who became increasingly hostile because of encroachment on their lands.

These colonists were defying a royal order that reserved land west of the Appalachian Mountains for Native Americans. The threat of attack increased as the American Revolution began back East: the tribes who lived beyond the Appalachians understandably wanted the British to put down the rebellion, and almost all of them allied themselves with the British.

The Zane family and a few others established Fort Henry, named for Patriot Patrick Henry, in 1774. Fort Henry was a parallelogram, 356 feet long and 150 feet wide, on a hillside overlooking the Ohio River, standing at what is now Tenth and Main streets in downtown Wheeling, West Virginia. The fort was surrounded by a stockade fence twelve feet high, and had a three-foot walkway running around the inside. It was practically impregnable as long as supplies lasted.

The fort covered about three quarters of an acre of ground, and had a block house at each corner, with lines of stout pickets about eight feet high, extending from one to the other. Within the enclosure were a number of cabins for the use of families, and the principal entrance was through a gateway on the side next to the straggling village.

While living with the daily reality of a terrifying attack, the women of Wheeling also were busy with cooking, washing, sewing, weaving, and other household tasks without the supplies that most housewives could take for granted. While men hunted and fished for food, frontier women grew vegetables, tended to livestock and poultry, and often did other farm work.

Betty’s family sent her to school in Philadelphia, but she returned to Wheeling in 1781, the year that Americans won the important Battle of Yorktown. The war was not yet formally over though, and especially on the frontier, an alliance of British Canadians and Native Americans would continue to fight settlers until after the War of 1812.

In September 1782, it was learned that a large Indian force was concentrating on the Sandusky River under the direction of the notorious white Tory renegade, Simon Girty, who had been captured by Indians as a boy. This savage force marched in the direction of Limestone, Kentucky, and laid siege to Fort Henry, before the scouts employed by Colonel Shepherd were able to discover his purpose.

The inhabitants of the village and several families in the neighborhood went to the fort for safety. Girty appeared at the fort with a white flag, and demanded their surrender in the name of His Majesty the King. The commander of the fort, Colonel David Shepherd promptly refused, stating that those inside the fort had a sacred charge to protect; their mothers, sisters, wives and children were assembled around them, and they resolved to fight to the death.

On September 11, 1782, Fort Henry was besieged by the British and their Native American allies. Inside the fort were about 40 men and boys who were old enough to handle a rifle, along with some 60 women and children. Betty Zane was among those trapped inside. The attackers greatly outnumbered the defenders: 250 Native American warriors allied with 50 able British soldiers.

Inside Fort Henry, there were only about 20 males of fighting age. Worse, they soon found themselves running out of gunpowder. The nearest source was sixty yards away in Ebenezer Zane’s cabin, where Betty’s father had buried a store box of black gunpowder in the cabin, and Betty volunteered to leave the fort to retrieve it. She believed she was the best candidate for the job for three reasons: (1) she was a woman and the enemy would be less inclined to shoot a girl; (2) she knew exactly where her father buried the gunpowder; (3) she was young and strong, and could carry an ample supply of powder.

About noon, the Indians and British soldiers watched in amazement as the gates of the fort swung open, allowing sixteen-year-old Betty Zane to slip out. Still watching intently, they saw the girl run quickly across the open field and disappear into the adjacent cabin.

Only a few minutes passed before they saw this same girl emerge from the cabin, but she now carried a large bundle wrapped in her apron. Suddenly realizing that this girl carried several pounds of gunpowder, the Indians opened fire on her during the dozen or so seconds that their target was in view.

Fortunately for the lives of those settlers in the fort, Betty sped up the slight incline to the fort , and was able to reach her destination unharmed, carrying her precious cargo of powder. With that powder, the fort continued to hold off the attackers until the following morning, when the enemy raised the siege and left.

The high degree of courage among frontier women was exemplified by Betty Zane, a dark-haired and dark-eyed beauty who single-handedly saved Fort Henry from annihilation. Her feat is more impressive because she had gone without sleep for 40 hours, pouring lead into bullet molds and dipping the molds into water.

Two other girls in the fort, Molly Scott and Lydia Boggs, later claimed credit for this or similar feats, but most historians agree that Betty Zane’s role was key.

After their father’s death, the children moved to the Ohio Valley where the brothers became famous as Indian fighters and settlers. Betty Zane married Ephraim McLaughlin in 1786, and had five daughters. After the death of her first husband, she married a second time to Jacob Clark and had two more children.

The Zane family later settled in what became Bellaire, Ohio, across the river from Wheeling, and played an important role during Ohio’s formative years. Betty lived on a farm west of Martins Ferry, the oldest permanent settlement in the state of Ohio.

Elizabeth Zane died on August 23, 1823, in St. Clairsville, Belmont County, Ohio. She was buried, along with her brother, Ebenezer Zane, in the Old Pioneer Section of Walnut Grove Pioneer Cemetery in Martins Ferry, Ohio.

Her heroism is remembered each year during Martins Ferry’s Betty Zane Pioneer Days. The community of Betty Zane near Wheeling, West Virginia, was named after her.

Betty Zane’s descendant, Zane Grey, the author of numerous western novels, wrote a fictionalized account of Betty’s story and titled his book simply, Betty Zane. When Zane Grey could not find a publisher for the book, he published it himself in 1903 using his wife’s money. Zane Grey also wrote a second book about her life and times entitled The Spirit of the Border, and named his daughter, Betty Zane Grey, after his famous ancestor.