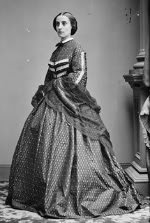 Elizaeth Hamilton Halleck was a natural subject for Matthew Brady’s camera and for E. & H. T. Anthony’s series of cartes de visite devoted to the new celebrities created by the early years of the Civil War.

Elizabeth Hamilton was born February 9, 1835 in Westernville, New York. She was the daughter of Colonel John Church Hamilton, and granddaughter of Alexander Hamilton. While the death of Alexander Hamilton, in the historic duel with Aaron Burr, left the family in dire financial circumstances, Elizabeth’s father was, nevertheless, able to graduate from Columbia College in 1809.

Henry Wager Halleck was born on January 16, 1815, in Westernville, New York, to Joseph Halleck and Catherine Wager Halleck, the third child of 14. At the age of 17, he ran away from home to avoid working on the family farm under his strict father, and to pursue a formal education. He initially lived with his maternal grandfather, Henry Wager, and later with his uncle David Wager in Utica, New York, and those two men supported Halleck financially.

Halleck was appointed to the United States Military Academy at West Point for the fall 1835 term. Because of his extensive knowledge, he taught classes while still a cadet. In 1839, he graduated third in a class of 31, was brevetted a second lieutenant, and was hired as a French instructor at the Academy for the next academic year.

In June 1840, Halleck was assigned to the Army Corps of Engineers to construct fortifications in New York City. In 1843, he turned down a position as professor of engineering at Harvard. In the early 1840s, Halleck wrote a modern guide to warfare based on French military theory. Halleck’s book became a text at West Point, and led General Winfield Scott (among others) to view him as one of the military’s leading strategists.

When the Mexican-American War began in 1846, Halleck was ordered to California, where he served in various engineering and administrative positions during the war. As secretary of state in the military government of California, he played a key role in drafting the new state’s constitution. While in California, he collected 4000 pages of state historical documents.

In the early 1850s, Halleck worked along the Pacific Coast as an army engineer and lighthouse inspector, and became owner of the 30,000 acre Rancho Nicasio in Marin County. In 1855, he became president of the Pacific & Atlantic Railroad Company. But he remained involved in military affairs, and by 1860 he was a major general in the California Militia.

Having studied law in his spare time, Halleck joined two other attorneys and became the head of the most prominent law firm in San Francisco, with large interests and much valuable property in the state, with whose development and prosperity his name was identified. Halleck became a wealthy man as a lawyer and land speculator.

When Henry Halleck married Elizabeth Hamilton on April 10, 1855, he was a wealthy and respected California lawyer, director of a bank and two railroads, and part owner of one of the richest mercury mines in the world. The Hallecks lived in an unpretentious home in the exclusive South Park district on Rincon Hill at the corner of Second and Folsom Streets. Their only child, Henry Wager Halleck Jr. was born the next year.

At the outbreak of the Civil War, Halleck tendered his services to the government, and General–in–Chief Winfield Scott summoned Halleck and his family to Washington in 1861, and Elizabeth Halleck attracted the interest and curiosity of the public.

On the recommendation of General Scott, Halleck was appointed to the rank of major general, his commission dating August 19, 1861, making him the fourth most senior general in the Army – after Scott, George B. McClellan and John C. Fremont. Three months later, Halleck took the place of Fremont as commander of the Department of Missouri(comprising Minnesota, Wisconsin, Illinois, Iowa, Missouri, Arkansas and western Kentucky) with his headquarters in St. Louis.

Halleck ordered simultaneous Union campaigns in southwest Missouri and along the Mississippi and Tennessee Rivers, and first came into contact with General Ulysses S. Grant. Grant captured Forts Henry and Donelson on the Tennessee River in February 1862, causing Halleck a significant amount of oncern that he may be overshadowed by his own subordinate.

General Halleck seemed to have made good. Out on the western front, he had taken over what was left of Fremont’s soldiers, reorganized and drilled them Into armies which produced good results for Generals Grant and William Tecumseh Sherman.

Halleck advised President Abraham Lincoln to correct a military error by having three independent commands in the West. Lincoln saw the point and placed General Halleck in overall command of the newly created Department of the Mississippi on March 11, 1862. This would place him in command of Grant’s army and General Don Carlos Buell’s Army of the Ohio.

By the spring of 1862, Halleck’s three campaigns had brought Union victories at Pea Ridge, Island No. 10, and Forts Donelson and Henry, giving Halleck the reputation of a master military administrator. But Halleck delayed Grant’s attack at Shiloh, Tennessee until April 6, 1862, giving the Confederates time to amass a larger army. The resulting high number of casualties and near defeat of Union troops prodded Halleck to assume command of his massive army in the field for the first time.

On May 4, Halleck began a drive toward the important railroad center of Corinth, Mississippi, to conduct operations against CSA General P.G.T. Beauregard. Halleck’s forces, almost twice the size of Beauregard’s, could have beaten the Confederates decisively, but Halleck ordered a slow, deliberate advance to Corinth.

Beauregard abandoned Corinth on May 29 without a fight, and the press criticized Halleck for not pursuing the escaping Confederates aggressively. Assessments of Halleck’s subsequent reputation diminished rapidly. Among the many complaints against him was his insistence on his troops making slow advances against the enemy by repairing railroads, building roads and fixing bridges. He is also blamed for hampering his generals with bureaucratic requests, paperwork and unnecessary military advice.

On July 11, 1862, President Lincoln issued an order appointing Halleck General-in-Chief of all Union armies and ordered him to report for duty in Washington. Halleck finally arrived reluctantly on July 23; he wanted to stay in the West, and he was sure he would hate Washington and all its politicians.

Halleck understood his position well – despite the president’s pledge to give the general-in-chief full control, he was essentially a conduit for Lincoln and Secretary of War Edwin M. Stanton) to issue commands to the armies in the field. Yet Halleck was unsuccessful as a commander or as a grand strategist. His cold, abrasive personality alienated his subordinates. 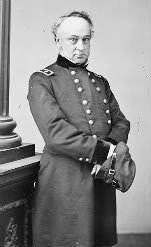 In Washington, Halleck continued to excel at administrative issues and facilitated the training, equipping and deployment of thousands of Union soldiers over vast areas, but Lincoln had hoped that Halleck could prod his subordinate generals into taking more coordinated, aggressive actions across all theaters of war. Lincoln was quickly disappointed, and was quoted as regarding Halleck as “little more than a first rate clerk.”

The Union defeat at the Second Battle of Bull Run (August 28–30, 1862) disheartened Halleck. Lincoln’s secretary, John Hay, reported that Halleck “broke down – nerve and pluck all gone and has ever since evaded all possible responsibility.” Halleck had the reputation of being the most unpopular man in Washington. Surly and gruff in manner, he had no restraints about insulting people, even important governmental officials. He detested politicians and let them know it.

Halleck’s most conspicuous was his handling of the pontoon bridges that General Ambrose Burnside needed to cross the Rappahannock River into Fredericksburg, Virginia, in December 1862. The delays in getting this materiel to Burnside sealed the fate of the entire campaign. Halleck offered his resignation in January 1863, but remained general–in–chief.

In June 1863, when Halleck ordered General Joseph Hooker to mirror Confederate General Robert E. Lee‘s northward movement toward Pennsylvania, Hooker resigned, and Halleck to appointed General George Meade to the command Union forces at the monumental Battle of Gettysburg. When Lee’s troops began to withdraw from Gettysburg on July 4, however, Meade failed to heed Halleck’s advice to pursue the Confederates aggressively.

On March 9, 1864, President Lincoln promoted Ulysses S. Grant to the rank of lieutenant general, and three days later the position of general–in–chief passed from Halleck to Grant. Halleck was relegated to army chief of staff, responsible for the administration of the vast U.S. armies. Grant and the War Department took special care to let Halleck down gently. Their orders stated that Halleck had been relieved as general in chief “at his own request.” Halleck would serve the remainder of the war, as Grant’s conduit to the administration.

Now that there was an aggressive general in the field, Halleck’s administrative capabilities complemented Grant nicely, and they worked well together. Throughout the arduous Overland Campaign and the Richmond-Petersburg Campaign of 1864, Halleck saw to it that Grant was properly supplied, equipped and reinforced on a scale that wore down the Confederates.

After Grant forced Robert E. Lee’s surrender at Appomattox Court House, Halleck was assigned to command the Military Division of the James, headquartered at Richmond. He was a pallbearer at President Lincoln’s funeral. Halleck lost his friendship with General Sherman when he quarreled with him over Sherman’s tendency to be lenient toward former Confederates.

Halleck even lost favor with Ulysses S. Grant, who went to his grave detesting him: “So far as my experience with General Halleck went,” he wrote tartly in his memoirs, “it was very much easier for him to refuse a favor than to grant one.” Gideon Welles, the Secretary of the Navy, found him absolutely maddening, was so repelled by his personality that he ascribed to him physical characteristics – “his bulging eyes, his flabby cheeks, his slack-twisted figure.”

On April 19, 1865, ten days after Lee’s surrender at Appomattox, Halleck was placed in charge of the Military Division of the James (Virginia and parts of North Carolina), headquartered in Richmond. While there, he saved a large number of official Confederate documents, which were later published in the reference book, The War of the Rebellion (1880–1901).

Henry Wager Halleck died at Louisville on January 9, 1872, in the arms of his brother-in-law, Schuyler Hamilton. He was buried in Green-Wood Cemetery in Brooklyn, New York. He left no memoirs for posterity and apparently destroyed his private correspondence and memoranda. His estate at his death showed a net value of $474,773.16.

Elizabeth Hamilton Halleck married George Washington Cullum on September 23, 1875, (Cullum’s first marriage). Cullum had served as General Halleck’s Chief of Staff In the war In the West and on his staff In Washington, DC. The couple spent their last years in New York City.

Charlotte Astor was the wife of John Jacob Astor III, who had donated $225,000 toward a cancer hospital. Elizabeth Cullum and Charlotte Astor founded the institution as a protest against those who considered cancer a vile, shameful disease. At the dedication, Dr. Fordyce Barker said that cancer was “not due to misery, to poverty, or bad sanitary surroundings, or to ignorance or to bad habits…”

In 1884, Elizabeth Cullum laid the cornerstone of the hospital’s first building at 106th Street and Central Park West in New York City – the first hospital in the United States dedicated specifically for the treatment of cancer. Elizabeth would die before the first building was completed.

Elizabeth Hamilton Halleck Cullum died of uterine cancer on September 15, 1884, at the age of 49. Charlotte Astor also died of cancer, just a week before the hospital’s grand opening in December 1887.