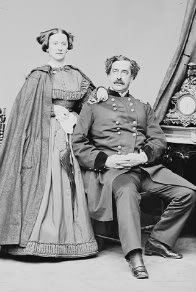 Abner Doubleday, one of three sons of Ulysses F. and Hester (Donnelly) Doubleday, was born at Ballston Spa, New York, on June 26, 1819. His father was a newspaper and book publisher, and a two-term US Congressman representing New York. His grandfather, also named Abner Doubleday, served under “Mad” Anthony Wayne in the American Revolution.

Not the Inventor of Baseball
The myth that Abner Doubleday invented baseball in 1839 was once widely promoted and widely believed, but recent scholarship has established that he played no role in the history of the sport. Doubleday never made such a claim; he never mentioned the sport in his many diaries, letters, and papers. His New York Times obituary makes no mention of baseball at all, nor did any encyclopedia articles about him.

Abner spent his childhood in Auburn, New York, and later was sent to Cooperstown to live with his uncle and attend a private preparatory high school. Abner had strong math skills, and he was trained as a surveyor and civil engineer. He worked as a surveyor from 1836 to 1838, when he was appointed to West Point. He graduated in 1842, 25th in a class of 56.

In 1907, a panel of baseball experts headed by A. G. Spalding conducted a highly-publicized investigation into the origins of the game, and concluded that Doubleday had written the rules for baseball in 1839 in Cooperstown, New York, based on the testimony of a boyhood friend named Abner Graves.

The panel’s work was driven more by mythmaking and the desire for good publicity for the sport than by any actual study of history. Doubleday could not object – he was already dead when he was chosen as baseball’s founding father – and he was considered a strong candidate because he was known and respected as a war hero. In truth, the rules for the game of baseball were written in 1845 by a committee headed by Alexander Cartwright – but even by then similar games called baseball had been played for decades.

Doubleday did grow up near Cooperstown, New York, but his family moved away in 1838, and by 1839, while Doubleday was alleged to have been inventing baseball at Cooperstown, he was a cadet at West Point, about 75 miles away – at the same time Graves said he was playing baseball in Cooperstown in 1839.

The Hall of Fame was later built at Cooperstown, but contrary to popular belief, Doubleday was never inducted into the Baseball Hall of Fame, although a large oil portrait of him was on display at the Hall of Fame for many years. He does have one valid link to baseball – Hall of Famer Wade Boggs is Doubleday’s seventh cousin.

After graduating from West Point, Abner Doubleday was assigned to the Third US Artillery, and he served in a number of coastal fortifications until the outbreak of the Mexican-American War in 1846. Transferred to the First US Artillery, he joined General Zachary Taylor’s army in Texas. Marching south, Doubleday saw action at the Battle of Monterey and served at Rinconada Pass during the Battle of Buena Vista. On March 3, 1847, shortly after the battle, Doubleday was promoted to first lieutenant.

Abner Doubleday married Mary Hewitt of Baltimore in 1852; they had no children.

Between 1847 and 1860, Doubleday served as a first lieutenant in the army, fought Indians in Texas, served in the Seminole Wars in Florida, and again in Atlantic Coast Ports. Doubleday was known for his dignified and courteous manner, and he used no profanity, liquor, or tobacco.

In 1860, Doubleday was stationed at Fort Moultrie in Charleston Harbor, South Carolina. He remained there until Major Robert Anderson withdrew the garrison to Fort Sumter after South Carolina seceded from the Union in December 1860. He was second in command at Fort Sumter when the fort came under Confederate attack, and gave the order to fire the first Union cannon shot in defense of Fort Sumter on April 12, 1861 – the beginning of the Civil War.

Following the fort’s surrender, Doubleday returned north and was quickly promoted to major on May 14, 1861, and assigned to the 17th Infantry in Major General Robert Patterson’s command in the lower Shenandoah Valley in Virginia, where he served from June through August 1861. In August, he was transferred to Washington where he commanded batteries along the Potomac River. On February 3, 1862, he was promoted to brigadier general and placed in command of the Washington defenses.

Action in Virginia and Maryland
With the formation of Major General John Pope’s Army of Virginia in the summer of 1862, Doubleday received his first combat command. Leading the 2nd Brigade, First Division, III Corps, he played a key role at Brawner’s Farm during the opening actions of Second Bull Run. Though his men were routed the next day, Doubleday took command of the Division on August 30, 1862, when Brigadier General John Hatch was wounded, and they rallied to cover the retreat of the Union army.

Transferred to the I Corps, Army of the Potomac, with the rest of Brigadier General John P. Hatch’s division, Doubleday next saw action at the Battle of South Mountain on September 14. When Hatch was wounded, Doubleday took command of the division. Retaining command of the division, he led them at the Battle of Antietam three days later. Fighting in the West Woods and the Cornfield, Doubleday’s men held the right flank of the Union army.

Doubleday was wounded at Antietam when an artillery shell exploded near his horse, throwing him to the ground in a violent fall. Recognized for his superior performance at Antietam, Doubleday was promoted to Major General on November 29, 1862. At Fredericksburg in December 1862, his division mostly sat idle. During the winter, the I Corps was reorganized, and Doubleday assumed command of the Third Division. At Chancellorsville in May 1863, the division was kept in reserve.

Battle of Gettysburg
Abner Doubleday got little respect from his fellow officers. He was stiff and pompous, and continued to view himself as the “Hero of Fort Sumter.” Commanding General at Gettysburg, George G. Meade, had spent much of 1862 with Doubleday as a fellow division commander in the I Corps, and had a dim view of Doubleday based on past combat performances, dating to South Mountain.

The great cavalry general John Buford did not care much for Doubleday either, and made his own dispositions on Gettysburg’s first day without consulting his superior. Charles Wainwright, First Corps artillery chief, wrote in his diary he “had no confidence” in Doubleday and thought he would be a “weak reed to lean upon” in an emergency. Despite his peers’ poor opinion of him, however, Doubleday at the age of forty-four was an experienced officer.

Doubleday commanded the Third Division, I Corps, at Gettysburg, and he arrived on the field on the first day of battle, July 1, almost at the moment that Union General John Reynolds was killed, at about 11:00 am. Doubleday was suddenly thrust into command of the entire I Corps, charged with guiding its deployment onto McPherson’s Ridge, straddling the Chambersburg Pike. As he saw it, his duty was to hold, for as long as possible, the far forward position Reynolds had staked out on the high ground.

Until late afternoon, Doubleday shifted his position constantly, moving divisions, brigades, even regiments to derive the best advantages of the ground against an enemy that not only outnumbered him but was coming at him from two directions. This five hours leading his 9,500 men through the bitter combat on McPherson’s and Seminary Ridges was Doubleday’s best performance of the war.

About 5:00 pm, Doubleday watched as the entire Union defense gave way, and supervised a more or less orderly retreat through the town of Gettysburg to the hills beyond. As the I Corps limped onto Culp’s and Cemetery Hill to reform after the day’s savage fighting, only 35 percent of the corps remained. It would never recover. However, under Doubleday’s direction it had bought time for the rest of the army to concentrate on the hills south of town.

It crushed Doubleday that at the end of such a day, General Meade replaced him at the head of the I Corps with his former West Point classmate, John Newton, a less experienced officer. Meade’s decision was also based on a report from General Oliver O. Howard that Doubleday’s corps had broke first that day, causing the entire Union line to collapse.

Doubleday returned to division command and fought well for the remainder of the battle. He was wounded in the neck on the second day and received a brevet promotion to colonel in the regular army for his service. He formally requested reinstatement as I Corps commander, but Meade refused.

Embarrassed and disgraced by Meade’s decision, Doubleday left Gettysburg on July 7 for Washington, DC. There, he tried to exonerate himself from Meade’s decision by writing the longest battle report of the Union army in Civil War history. As it turned out, he would never fight another battle.

Doubleday was then relegated to administrative duties for the remainder of the war. He was in charge of courts martial, which gave him legal experience that he used after the war. His only return to combat was directing a portion of the Washington defenses against CSA General Jubal Early’s raids in 1864. Also while in Washington, Doubleday testified against George Meade at the US Congress Joint Committee on the Conduct of the War, criticizing Meade harshly over his conduct of the Battle of Gettysburg.

Doubleday remained a loyal Republican and staunch supporter of President Abraham Lincoln. He rode with Lincoln on the train to Gettysburg for the Gettysburg Address, and Abner and Mary Doubleday attended events with Mr. and Mrs. Lincoln in Washington.

After the Civil War, Doubleday mustered out of the volunteer service on August 24, 1865, and he was promoted to colonel in the regular army and transferred to California in 1870. With three business partners, he proposed and received the charter for the first San Francisco cable car line. Unable to find the necessary financing, they sold their franchise to a cable manufacturer, who then built the world’s first cable car route, the Clay Street Hill Railroad.

In 1871, Doubleday was placed in command of the all-black Twenty-fourth United States Infantry regiment in Texas. He also wrote two books, Reminiscences of Fort Sumter and Moultrie in 1860-61 and Chancellorsville and Gettysburg. He is also the author of Taps which is played at every military funeral and is still used as ‘lights out’ at every military base.

After he became seriously ill of a stomach disorder, Doubleday applied for and received an extended medical leave. He left Texas in June 1873, and because his condition did not improve, in December he retired from the army. During the 1870s, he was listed in the New York business directory as lawyer.

Mary and Abner Doubleday later moved to Mendham, New Jersey, and he was active in veterans reunions and in organizing the management of Gettysburg National Park.

General Abner Doubleday died on January 26, 1893, and was buried in Section 1 of Arlington National Cemetery.