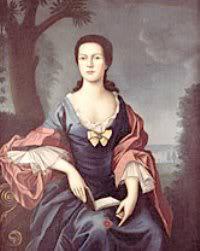 Portrait of Anne Ross
By Benjamin West
West’s Anne Lawler Ross depicts a seated woman outdoors, holding a book on her lap in her right hand and a flower in her left. Her costume includes a pear-shaped pearl, bow and lace at the bodice. Her almond-shaped eyes and simplified modeling are characteristic of West’s colonial portraits.

Anne Lawler, born July 10, 1731, was the only child of Mary Lawler, a widow in Lancaster, Pennsylvania, who owned considerable property. George Ross was born May 10, 1730, in Newcastle, Delaware, where his father was clergyman of the Episcopal Church. His father was also twice married and had eleven children, all of whom became prominent members of society.

George was well educated at home; then, at the age of eighteen, studied law at his older brother John’s law office in Philadelphia, the common practice in those days. George was admitted to the Pennsylvania bar, at the age of twenty, in 1750, and moved to Lancaster, Pennsylvania, where he set up a law practice. One of his first clients was Anne Lawler, a pretty young woman whom he fell in love with.

Anne Lawler married George Ross on August 14, 1751, and it was considered a highly advantageous union for both. Three children were born to George and Anne: George Jr., James, and Mary. George Jr., the eldest, was a staunch patriot during the Revolution and was for some time Vice-President of the Supreme Executive Council of Pennsylvania. In 1791, he was commissioned Register and Recorder by the Governor, an office he held for eighteen years.

Ross built up a successful law practice in Lancaster. Initially a Tory (supporter of the British), he served as Crown Prosecutor for twelve years. He was elected to the Provincial Legislature in 1768; he was reelected many times, serving in that body even after he was chosen to be a delegate to the Continental Congress. Only Benjamin Franklin received a larger vote than Ross in the balloting. In the Legislature, Ross’s sympathies began to change, and he became a strong supporter of the colonies in their disputes with Parliament, and often opposed the Royal Governor.

Anne Lawler Ross died May 30, 1773, and was buried at Saint James Church Cemetery in Lancaster, PA.

When war broke out between the colonies and Britain, George Ross served as a Colonel in the Continental Army from 1775 until 1776. George’s brother, James, raised the first company in Lancaster County, in Colonel Thompson’s regiment of which he was made captain, and marched to Cambridge. He rose to the rank of Lieutenant-Colonel of the Eighth Pennsylvania Regiment with which he fought at Long Island, Trenton, Germantown, Brandywine, and in other important engagements. George Ross was also elected Vice President of the first Pennsylvania Constitutional Convention in 1776, where he helped to draft a declaration of rights and Pennsylvania’s first constitution.

George Ross’s nephew, John Ross, was the first husband of Betsy Ross, who was an excellent seamstress and lived in Philadelphia. Ross, George Washington, and Robert Morris met her to ask her to sew the first American flag. This meeting occurred in her home in late May 1776. According to folklore, it was Betsy who decided to use five-point stars instead of the suggested six-point stars. Many historians also credit Francis Hopkinson of New Jersey with coming up with the original design, but almost every historian agrees that young Betsy made several American Flags for the new country.

George Ross was not a Member of Congress during the voting for independence on July 2, 1776, but he received his appointment soon thereafter and signed the Declaration of Independence on August 2, with most of the other delegates. He won a reputation among his colleagues for his eloquence and wit, but made no noteworthy contributions to congressional proceedings. A few of the signers, such as George Ross, were latecomers to the Revolutionary cause. Like many others, he exerted more influence in his state than in national affairs.

George Ross’s Signature
On the Declaration of Independence

Due to poor health, he resigned from the Continental Congress in January of 1777, and later accepted an appointment as a judge in the Pennsylvania Court of Admiralty, an office he held until his death.

In 1778, while Ross was acting as admiralty judge, a congressional court of appeals overruled his decision in a case involving a dispute between a citizen of Connecticut and the State of Pennsylvania. Ross, refusing to acknowledge the authority of the higher court to counter State decisions, initiated a dispute between Pennsylvania and the Central Government that represented an early manifestation of the States rights controversy and did not subside until 1809, but Ross did not live to see the outcome.

Afflicted by severe gout, George Ross died July 14, 1779, at the age of 49 – three short years after signing the Declaration. He was buried in Christ Church Burial Ground in Philadelphia, PA.

While he didn’t live to see independence, George Ross signed the Declaration of Independence, with a signature that was bold and underscored.