Abigail Carey was born in Bristol County, Rhode Island, on November 12, 1742, the daughter of Nathaniel and Elizabeth Wanton Carey. William Ellery was born in Newport, Rhode Island, to a wealthy mercantile family on December 22, 1727. His father, of the same name, was graduated at Harvard in 1722, became a successful merchant in Newport, and served successively as judge, senator, and lieutenant governor of the colony. Newport was then a unique community where despite many religious differences, there was a degree of tolerance.

The elder Ellery prepared young William for college, and he entered Harvard in 1743. He was not enthused about becoming a merchant like his father, and entertained thoughts of being a lawyer. Ellery graduated in the Harvard class of 1747, and returned home to Newport.

Ellery married Ann Remington on October 11, 1750, against his father’s wishes. His father came around when his first granddaughter was born the following year, and it was soon evident that William must work to support his family. Working as a merchant, Ellery successfully made a good living for the next twenty years.

Ellery had searched for the right career for many years; he worked as a merchant, then a customs collector, and lastly as Clerk of the Rhode Island General Assembly. Twenty years would pass before he sought a career in law. He confided later:

If the year before I graduated I had determined upon law, or physics, especially the latter, I am persuaded that I should have led a more profitable and useful life. But no one advised me, and I made no choice. I entered into small commerce without a spirit of enterprise or skill in trade; that would not do. I had married a wife, and could not submit to be an understrapper to a physician. I became a clerk of the court; where I copied writs and declarations, gained some knowledge of practice, and stood forth a dabbler – a quack lawyer.

A series of events in 1764 changed William Ellery’s life forever. In March of that year, his father died; six months later, his beloved Ann passed away after fourteen years of marriage, leaving him with six children. Ellery had inherited some money from his father, and he took the opportunity pursue his dream of studying law.

On June 28, 1767, William Ellery married Abigail Carey, a distant cousin, with whom he had eight children, but only two survived to adulthood.

Ellery began the practicing law in Newport in 1770 at the age of 43, and seemed to have found his calling. He was known as a gentle and kind man, who loved to garden and spent his free time growing flowers and vegetables.

Ellery joined the Whig party, and became active in politics. He stepped out of his quiet, unassuming character during the Stamp Act crisis, by leading a riotous march through Providence in opposition. When the Intolerable Acts – a series of laws passed by the British Parliament in 1774 – began to hurt the colonists, Ellery quickly joined Newport’s Sons of Liberty.

From the beginning of the agitation against the encroachments of the British ministry, Ellery had been outspoken in favor of the rights of the people. He was made to suffer greatly for this. His house was burned and his property greatly damaged at an early stage of the struggle but he did not give up his seat in Congress and return home as he would have been justified in doing; he left his own business affairs to get along as best they might, while he continued service as one of the most indefatigable workers in Congress.

In March 1776, Ellery’s friend Samuel Ward died of smallpox, and Ellery was chosen to succeed him in the Continental Congress in Philadelphia. He was forty-eight years old when he presented himself at the Second Continental Congress on May 14, 1776. At the opening of the Congress, he announced boldly: “You must exert yourself. To be ruled by Tories, when we may be ruled by Sons of Liberty – how debasing. You must rouse up all that is Roman in Providence. There is liberty and fire enough; it only requires the application of the bellows. Blow, then, a blast that will shake this country.”

Ellery became an influential member of the Congress, and was immediately appointed to the Marine committee, serving on the committee to consider the ways and means of establishing expresses between the continental posts, and on the special committee for purchasing clothing for the army.

William Ellery’s Signature
On the Declaration of Independence

During this session, William Ellery signed the Declaration of Independence, and took a position where he could watch the faces of the delegates as they affix their signatures to this revolutionary document. He later wrote:

I was determined to see how they all looked as they signed what might be their death warrant. I placed myself beside the secretary, Charles Thomson, and eyed each closely as he affixed his name to the document. Undaunted resolution was displayed in every countenance.

More than one record indicates that at the time of the signing, Benjamin Harrison, a heavily-built man said to the thin-framed Ellery:

I shall have a great advantage over you, Mr. Ellery, when we are all hung for what we are now doing. From the size and weight of my body, I shall die in a few minutes, but from the lightness of your body, you will dance in the air for an hour or two before you are dead.

One of a small group of lesser known signers whose achievements were comparatively modest, William Ellery gained little fame beyond his hometown. He was noted for his ready wit, and he often amused himself by writing epigrams about his colleagues while they were speaking.

Of the 56 signers, many fared poorly, and William Ellery was no exception. In December 1776, a British fleet arrived in Narragansett Bay; on December 7, they occupied Newport. The extended occupation of Newport brought hardships including disruption of shipping and commercial activities; and these took a toll on the city’s infrastructure and economy.

The British were well aware that Ellery had signed the Declaration of Independence; they burned the Ellery family home to the ground and destroyed his property. He would have to borrow money from his friends to pay his expenses. He did, however, return to Newport after the war, and apparently recovered financially.

An attempt was made to break the occupation of Newport in the spring of 1778, combining a land attack from the north with a sea attack by a French fleet. The fleet, however, ran into a severe storm and had to divert to Boston. Without sea support, the land forces had to withdraw. The British did not leave Narragansett Bay until October 1779. As they departed, they destroyed the fortifications they had occupied, and burned Beavertail lighthouse as well.

In 1779, Ellery was a member of a committee to arrange some diplomatic difficulties among the American commissioners to Europe, and was chairman of a committee to consider means of relieving the distress brought upon the Rhode Islanders by the British occupation. In 1782, he presented to Congress a plan for organizing a department of foreign affairs.

In 1777, Rhode Island initiated popular election of congressional Delegates, and Ellery’s Newport constituency maintained him in office until 1786, except for the years 1780 and 1782. In 1780, he remained in Philadelphia as an ex officio member of the board of admiralty, on which he had been sitting. His other committee assignments included those dealing with commercial and naval affairs. On occasion, to entertain himself and others, he wrote witty epigrams about various speakers.

In 1785, Ellery turned down the position of chief justice of the Rhode Island Superior Court to remain in Congress, where he had attained commanding seniority. Also in 1785, Ellery actively supported Rufus King of New York in his effort to abolish slavery throughout the country, seconding King’s resolution to that effect, and became one of the movement’s leading advocates.

In those days, important people in the colonies usually traveled by carriage, but Ellery preferred to travel by horse. He soon became known as the “Congressman on Horseback” for his many travels about Rhode Island to meet his constituents.

In 1786, Ellery ended his congressional career to accept an appointment as commissioner of the Continental Loan Office for the state of Rhode Island (1786-90). The need to straighten out his own finances probably compelled him to accept. Since the British occupation of Newport, he had been too busy to rebuild his fortune.

With the organization of the Federal government, Ellery received from President George Washington the appointment of First Collector of Customs for the port of Newport on January 1, 1790. He retained this post, through all the different administration changes, until his death.

Abigail Carey Ellery died at Newport in 1793, and was survived by her husband many years. She was buried in the Common Burial Ground in Newport, Rhode Island. 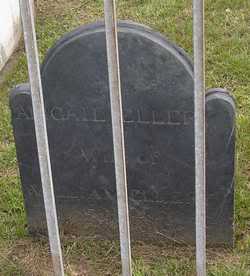 Mr. Ellery was of moderate stature, with a large head and impressive features. He was fond of study and literature, and was highly esteemed for his social qualities, being intimate [friends] with all the distinguished men of his time. In his later years, Ellery prospered. He kept active in public affairs and spent many hours in scholarly pursuits and correspondence.

William Ellery died on February 15, 1820, at the age of ninety-two. With the exception of Charles Carroll, he was the longest-lived of the Signers. He retained the full use of his faculties to the end, and died holding in his hand a copy of Cicero’s De Ofliciis, which he had been reading.

Ellery was interred in the Coggeshall Cemetery in Newport. Later, he was given a tomb in the Common Burying Ground in Newport. 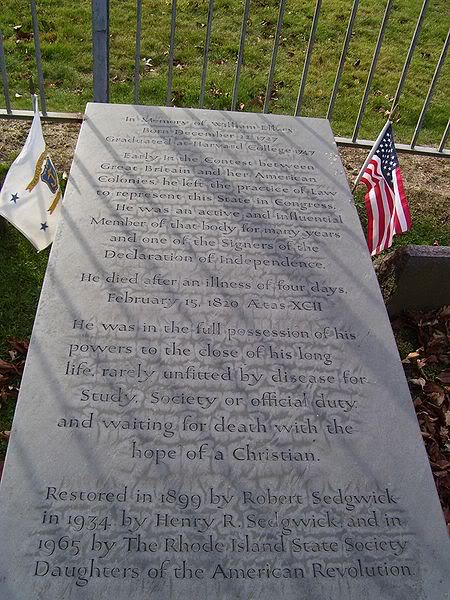