Loyalist Woman in the American Revolution

Mary Gould was born in 1735 in Newport, Rhode Island. Benjamin Almy was born on December 16, 1724. Mary Gould married Benjamin Almy on October 22, 1762 at Trinity Church in Newport – his church. She was a Quaker; he was Anglican.

When sides were chosen over the issue of American Independence, Mary remained loyal to the crown. Benjamin joined the patriot cause, as did some of Mary’s other relatives. And like hundreds of other Newport volunteers, he left his wife and family behind and joined the Patriot army. Her diary is addressed to him.

The Jahleel Brenton House was confiscated from its Loyalist owner by the American Patriots around 1775, and the Almy family immediately occupied the home. (I do not know how this came about.) Mary Almy’s letters to her husband tell exactly what it was like in Newport during the long years of British occupation, which began in December 1776.

Here are pages from the letters of a wife, loyal to her king, stubborn in her politics, and yet praying for the safety of her dear husband and a rapid end to the death and destruction of war. The letter diary begins with the appearance of the French fleet in Newport Harbor July 29, 1778, and the early entries include prayers that the French “would never come so near.”

After days of watching and waiting, expecting the worst, as the occupying British forces prepared either to attack or be attacked, Mary wrote:
Monday, August 3, 1778

The whole town in some great confusion, not knowing what they should be at, some moving their goods out to the lines, the officers all bringing their luggage into the town. Constant fatigue for the men, horses, and oxen; no rest by day or night… When I look over the list of my friends on both sides of the question, my heart shudders at the thought, what numbers must be slain, both so obstinate, so determined. Well may we say, what havoc does ambition make! Cursed Frenchmen! They [the Americans] would not have come, had it not been for you.

Fearing the worst, over the next few days Mary made plans to take her mother and children to a safer part of the island.
Thursday, August 6

Exceedingly foggy morning; all terrified with apprehension that when the weather cleared, our destiny would be known; all the shops still kept shut, no business of any kind done, only carting and fortifying; the sound of a cannon, most distressing to women and children; an order given out to drive all the stock within the lines. The wretched inhabitants, how are they hurt by every party! My heart aches for the worthy ones.

The next day, as the shelling increased, she wrote:
Friday, August 7

Heavens! what a scene of wretchedness before this once happy and flourishing island! Cursed ought, and will be, the man who brought all this woe and desolation on a good people. Neither sleep to my eyes, nor slumber to my eyelids, this night; but judge you, what preparation could I make, had I been endowed with as much presence of mind as ever woman was; six children hanging around me, the little girls crying out, ‘Mamma will they kill us!’

The boys endeavor to put on an air of manliness, and strive to assist, but step up to the girls, in a whisper, ‘Who do you think will hurt you! Arn’t your pappa coming with them?’ Indeed this cut me to the soul. …But I was roused from my stupidity by a violent firing. I call out for my children to run; we sally forth in the street; there was a scene, men, women and children all in as great a consternation as myself, which sight brought me to myself.

Mary managed to get her mother and children to safety at the home of a friend named Church, despite heavy shelling from the French, which “…I really thought would have sent us all to another world.”

…what an agony I was in, when I had time to recollect my scattered thoughts. Heaven that ever has been kind to me, sent the captains of the transports to see me. They …sent me two truly valuable sailors for my safeguards, whose kind care I hope I never shall forget. To attempt to describe the horrors of that night would pronounce me a fool, for no language could put it in its proper colors. Fire and sword had come amongst us, and famine was not far off, for the want of bread was great.

At 1 o’clock that day, the French fleet took advantage of a swift breeze to sail past the town firing broadsides. Although they failed to silence a single British battery, they managed to sink or burn several British ships.

British reinforcements showed up on the 9th and engaged the French the next day. With her mother and children safely out of direct combat, Mary wrote that during the worst of the firing that day, she hid in the cellar of the mansion behind a barrel, and she commented that it “was very remarkable, by all the hundreds of shot that came into the town, not a soul was killed or wounded.”

For the next few days, the weather was very bad, and during a terrible storm, Mary wrote that “the wind blew a perfect hurricane,” and so they feared no attack at that time. At last, after nearly two weeks of fear, she reported that she was able to sleep.

By Friday, August 14, the waiting was weighing heavily upon our narrator: “No tidings of the fleet, no business going forward… Tedious days, melancholy nights. I wonder what keeps me alive.” The storm afforded both fleets the opportunity to put in for repairs, the French to Providence and the British to New York.

Three days later, apparently her nerves had become somewhat steeled to the sound of gunfire, as she wrote:
Monday, August 17

About 12, they opened a new battery upon us, and the day was spent in exchanging shots; in the evening they entertained us with throwing shells. It would have been an agreeable sight, had we not been sure it was meant to carry death along with it. I sat upon the top of the house till 12, beholding and admiring the wonderful contrivances of man to destroy one another.

Again, days of apprehension passed as rumors abounded and strategies changed and shifted. The French fleet returned on Thursday, August 20, but it was obvious “they were in shattered condition, had lost their topmasts, and had one ship less than when they went out.”

We were worn out with the fatigues of this dreadful day, but dared not take any rest, for fear we should be caught asleep; never did I so dread the night, and yet so grieve the morning light. 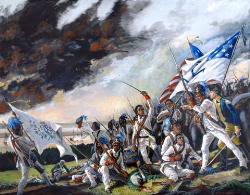 Several British regiments and Hessian units chased down and slaughtered some patriots on August 29, Mary was horrified that her country had done such a despicable thing. After the terrible battle at the East and West Main Roads which has come to be called the Battle of Rhode Island, during which nearly 500 men were either killed or wounded, Mary broke down at the sight of “wives screaming at the foot of the cart” as the dead and injured are removed.

“…it’s too far beyond the power of my description. The horrors of that day will never be quite out of my remembrance. I quitted company and hid myself to mourn in silence, for the wickedness of my country. Never was a heart more differently agitated than mine. Some of my good friends [were] in the front of the battle here; and Heaven only knows how many on the other side [her husband’s side]. Instead of enquiring the news, or asking after a soul, a stupidity took hold of me.

At last I shut myself from the family, to implore Heaven to protect you [Benjamin], and keep you from imprisonment and death. Every dejected look, and every melancholy countenance I saw, I trembled for fear they would say, ‘your husband lies among the slain,’ or that ‘he is wounded and a prisoner.’ Think you what life I live, knowing your proneness to get into danger.

On Monday morning, Mary Almy finally received word that her husband Benjamin would be home for breakfast with some friends.

Oh! Mr. Almy, what a shocking disappointment to you. Heaven, I hope, will support you, so positive, so assured of success. Remember, in all your difficulties and trials of life, that when the All-wise disposer of human events thinks we have been sufficiently tried, then our patience in waiting will be amply rewarded by a joyful meeting.

The first and only effort to free Newport from the oppressive British occupation had failed, and the town remained under British control until they withdrew permanently in October 1779.

All of the Almy children had moved away, and Benjamin finally moved out of the Brenton mansion. The house served as a seminary for women during the second half of the nineteenth century. Considered too far gone to be worth saving, it was demolished in the 1920s.

Mary’s original diary is owned by the Newport Historical Society.