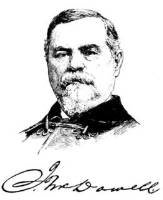 Helen Burden, born June 27, 1826, was the daughter of Henry and Helen McOuat Burden, who came to America from Scotland via Quebec. The family settled first in Albany, New York, then Troy, New York, where Helen’s father owned the Burden Iron Works, which made horseshoes.

Irvin McDowell, born 1818 near Columbus, Ohio, entered the West Point Military Academy in 1834, when he was 16 years old. He graduated from West Point in 1838, and served on the Northern frontier during the Canada border disturbances, on the Maine frontier pending the disputed Territory controversy, and in the Mexican war under General John Ellis Wool. Helen met McDowell through General Wool, who was also from Troy, NY.

Helen Burden married Captain McDowell at the Second Presbyterian Church in Troy on November 13, 1844. He hailed from Ohio and was assistant adjutant general in Washington in April 1861. They had four children: Irvin, Helen, Elsie, and Henry Burden McDowell.

When the Civil War began, Irvin McDowell was a brevet major, a man of physical energy, wide interests, and strong opinions. He was promoted to brigadier general in the regular army on May 14, 1861, and given command of the Army of Northeastern Virginia, never having commanded troops in combat. The promotion was partly because of the influence of his mentor, Treasury Secretary Salmon P. Chase.

On May 29, 1861, McDowell was given command of the Army of the Potomac, which consisted of about 30,000 men, who were almost entirely raw recruits. In response to the demand for some immediate action, on July 16 he was ordered to march against the Confederate army that was posted at Manassas Junction under General P.G.T. Beauregard, McDowell’s classmate at West Point.

McDowell’s plan of campaign had been carefully studied, and its principal feature was to turn the enemy’s left flank while threatening the front, which was well posted behind Bull Run on an elevation that overlooked the entire plateau. His strategy during the First Battle of Bull Run was imaginative, but his troops were not experienced enough to carry it out effectively. His plans were admittedly excellent, but nothing could check the demoralization of the green troops.

On the morning of the July 21, 1861, the Federal army crossed the run and succeeded in throwing the enemy’s left into such confusion that the presence of Generals Beauregard and Joseph E. Johnston was necessary to rally their troops, who then re-formed in a line on the crest of the hill. A severe struggle for this position ensued, and it was lost and won three times, and about three o’clock in the afternoon it remained in the control of the National forces.

But soon after that hour, fresh Confederate reinforcements arrived and completely turned the tide of battle. The judgment of time attributes the defeat less to General McDowell’s lack of ability than to the operation of forces that no man of his inexperience could have overcome.

McDowell’s men, who had been on their feet since two o’clock in the morning, who had marched twelve miles to the field and been engaged in heavy fighting since ten o’clock, were now exhausted by fatigue and want of food and water. Unable to withstand the fierce attack of fresh troops, they broke and ran in confusion down the hillside and made a disorderly retreat to Washington. Thus thefirst great battleof the Civil War was fought and lost.

In the summer of 1862, there were four independent Union commands in Virginia, and in quick succession they were attacked with such force that concentration became necessary, and the Army of Virginia was formed under General John Pope and the command of the Third Corps was given to General McDowell. The campaign of northern Virginia followed, and with his command he participated in the Battle of Cedar Mountain, the action of Rappahannock Station and the Second Battle of Bull Run in late August 1862.

Criticized for his performance at Second Bull Run, McDowell was relieved of his command, and removed from duty in the field on September 6, 1862. Regarding this action of the War Department a direct reflection upon his military service, he asked for an investigation, the result of which was favorable to him. A court of inquiry reported “that the interests of the public service do not require any further investigation into the conduct of Major General McDowell.” No further field command was entrusted to him during the Civil War. 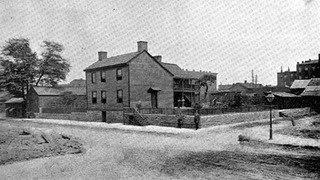 McDowell was probably unfortunate in the roles that fell to him. His first ever independent command was the Army of the Potomac. His only major failing before First Bull Run was the slowness of his movements, hardly a unique failing amongst Union commanders at that time. The disaster at Second Bull Run was largely due to Pope’s misreading of the situation. McDowell was simply one of many commanders to be promoted above their capacity early in the war.

McDowell remained in active service in the army, but not in the field. He was an able staff officer and a brilliant desk general, but like most of the early Union command choices, he was not suited for the battlefield because of his limited experience.

In 1863-64, he was President of the Court for investigating cotton frauds and of the board for retiring disabled officers. From July, 1864, to June, 1865, McDowell was in command of the Department of the Pacific, with headquarters in San Francisco, and held that office until July 27, 1865.

In November 1872, he was promoted to Major General in the regular United States Army. Soon after, he succeeded General George G. Meade as commander of the Division of the South, and remained until June 30, 1876, after which he returned to San Francisco in charge of the Division of the Pacific until his retirement from the army on October 15, 1882.

General McDowell was not popular as a public man, but in private life he made a great many friends. He was hospitable and greatly enjoyed music, painting, and entertaining his friends. His family relations were pleasant, and his private life was beyond reproach. He bore his misfortunes with dignity and composure.

General Irvin McDowell died of a heart attack at San Francisco May 4, 1885, at age 67. He had been in failing health for some time. He was buried at the San Francisco National Cemetery in the Presidio with full military honors by the Local Grand Army of the Republic. I found no record of his wife’s death.